Do you want to see something weird? Then check out this page on Amazon.com for one of the Kindle Paperwhites.

If you click the link you’ll see that you’re looking at the product page for the international Kindle Paperwhite (2013). We can tell that it is the international page by the  dropdown menu for countries and the mention of a Carta E-ink screen lower on the page, and we can also see that this model is not available.

And as you can see in the screenshot below, there is also an orange bar with the helpful suggestion that you might want to consider buying the new model: the Kindle Paperwhite with Wi-Fi (2014). And yes, that link works. 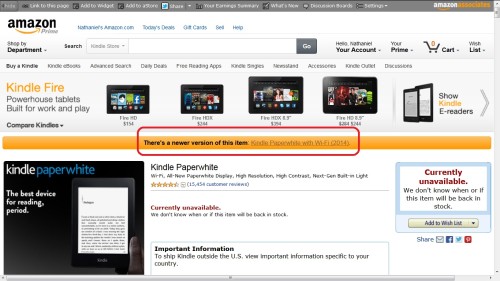 Amazon has quietly deployed a new product page (complete with a new ASIN) for a new Kindle Paperwhite. That’s great news, but unfortunately it’s not clear whether we have new hardware as well.

And that’s where things get weird.

Amazon is directing customers to a new Kindle Paperwhite which is fundamentally identical to the model it replaced.  The features are the same, and all of the listed specs are identical. Sure, there are a few minor differences in the descriptions, but there’s no real way to tell that this is a new model.

According to the German ebook blog which noticed the change in July (I was sitting on the story), the 2014 model has twice the storage of the old model. That detail is not listed anywhere that I can see, but this has been confirmed by several different members of MobileRead.

What’s more, earlier today AlleseBook.de posted a side by side screen shot of last year’s KPW with this year’s KPW. Note the different amounts of storage, and the different serial numbers: 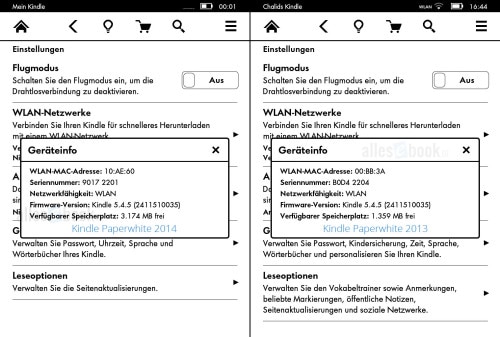 Anyone who has been keeping an obsessive eye on Kindle news will know that there already was a KPW model with 3.1GB of storage floating. It was only available in Japan, but now it seems Amazon is selling it outside of Japan.

Apparently Amazon has very quietly started selling that particular Kindle Paperwhite variant in Europe (and Canada, I can now confirm) while calling it the 2014 model. And this has me very confused.

But with the news of the 2014 model quietly replacing the older model, I am left with more questions than I can answer.

Is this it? Does this Kindle mean we’re not going to see a KPW with even minor improvements this year? Or was this a mistake on the part of Amazon?

I don’t know. If anyone knows what is going on, the comments are open.

Update: According to Amazon, "This is not a new product – we’ve added more on-device storage to the existing Kindle Paperwhite." 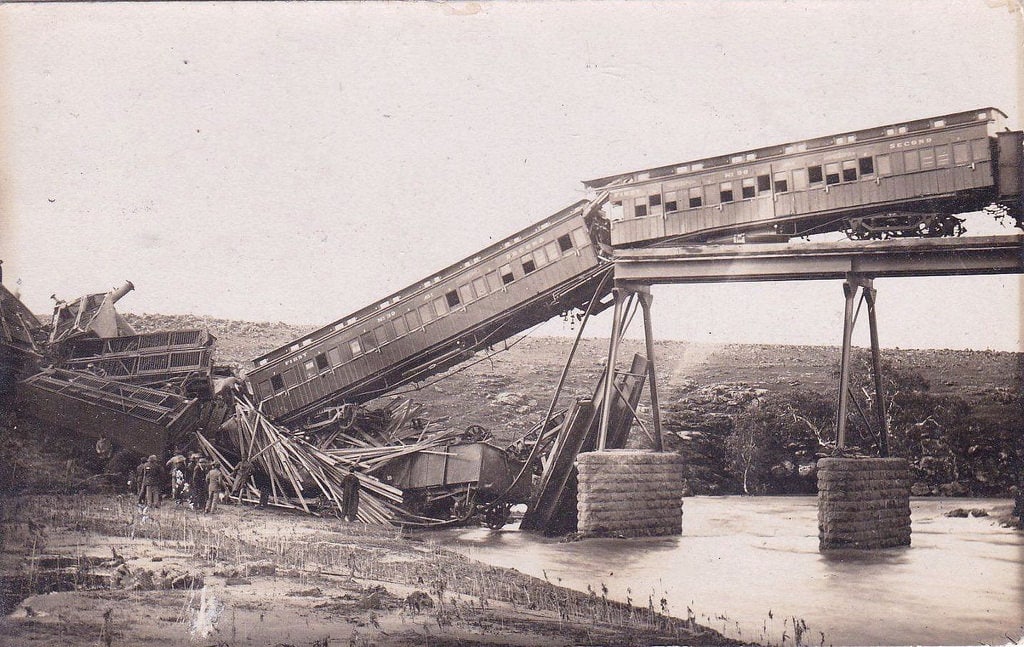 It’s not just in Europe – I just bought a new PW in Canada a few weeks ago (decided to retire my creaky old Kindle 2 to a life as a backup unit). I noticed the change in the style of the serial number right away (while, um, checking the serial number out of curiousity. Not while, say, entering it into the calibre DRM-disinfection plugin.) I hadn’t looked at the storage capacity until now, but I just plugged it in and it’s showing 3.13 GB.

I have no idea what, if anything, this means for future updates, though.

Yep. I noticed that several people at MR have the newer Kindle. I updated the post.

Or, maybe the new model won’t be called a Paperwhite.
They may be planning to go "good, better, best" and insert a higher priced model into the lineup. In which case improving the PW too much won’t help.
The could also be going "low and lower" and instead introducing a new basic Kindle. And then they’d want to better differentiate the PW from the basic model.

It’ll be interesting which way they’re headed with eink.

Then why upgrade the storage at all?

Off the cuff? The Japanese version with the extra storage didn’t sell as well as expected, so they shunted the overstock to the other international stores. Or they’re phasing out the "old" PW, have stopped production, the new model isn’t ready for announcement and they’re running low/out of stock on the previous one, so they’re filling orders from what they have on hand. As suggested below the supplier they were using for memory chips has dropped production of the 2 GB chips (or dropped the price on the 4 GB ones).

Pick your favourite or make up your own 🙂

Price shown is $139. While some may prefer the ad-free version, those that don’t care will pay $20 more for the extra memory.

The "with ads" version is US-only, I believe (it’s not available in the .ca or .co.uk stores at all, and if you go to the International Kindle page on the .com site it only shows you the ad-free version).

Nothing happens if no new kindle this year. The important thing is that when you get to do the really important improvements and not just "a little more resolution" or "10 grams lighter"

What is the "model" of this new device (can be found near the certification marks of the rear of the device). This will define if it’s a new product or simply an memory size increase of an existing model.

Why did they bother? And is this new storage exclusively for use by the user, or for Amazon "updates"?

Users can add their own files, yes.

Not interested in the old or the new. My still-olderd Kindle 3 can read text to me, while those later Paperwhites can’t. That matters more than a backlit screen. It’s also better for those with vision impairments. Amazon should have kept text-to-speech for the Paperwhite.

It is not a backlit screen…

99% of the market buys E-readers to read them, not listen to them.

Also as the other comment pointed out, you have your screens mixed up, no back lit screens to be seen here…

I am in the 1%. English is for me second language and I like hearing what I am reading. Kindle 3 keyboard needs only a better quality tts voice with more british accent.

We don’t have a British accent when we are English. We have an English accent, rather than an American accent.

What probably happened is the supplier of the memory chips stopped producing the 2gb chips and now is producing 3gb (4gb?) ones instead and supplying it to Amazon for the same cost. So this update wasnt enough for them to call it another version. Think of it like a “refresh”, sorta like what Apple did to Macbook Air’s at the beginning of this year.

When we were talking about a new model on the other post, I found this one, but got confused with the various release date.

I’m think I’m going to wait for end of september just in case something new is announced, and if not, will buy a second hand kindle (or maybe a non amazon reader, but staying in the same ecosystem is more comfortable) for my son ( waiting for a real new model to replace mine)

I tried to buy a kindle paperwhite at BestBuy a week ago but they said they had run out of them and it had been discontinued in their system. Makes me think Amazon is about to launch a new version!

Please make next new paperwhite kindle with text to speech. I enjoyed that feature

From an author’s perspective having TTS or Text To Speech on the earlier kindles was great.

Readers of your books could multi-task simultaneously ie stop your reading your book, turn on TTS and cook, drive their vehicles and listen to the book being read through the audio system.

The TTS was also great for the blind impaired people as they could listen to the books being to them.

Also, some book readers also like to hear soft music in the background and the earlier models allowed you to save music on the devices for playback.

It would be a very lost opportunity if TTS was not included in future kindle models.

For anyone who wanted to know why someone would want 4 gb versus 2gb – very important for megareaders like me (838 ebooks and counting). Nook Simple Touch with Glowlight (2gb ) clogged up at around 500 books. Flashes error messages at me continually about how I need to archive books – no available storage. Got a Nook Hd+ basically just to access my library. Thought I could then archive a few hundred books on the Stwgl but found that it’s not possible to archive books just on 1 device – an archived book is archived across devices. I have no reason to believe 2 gb storage on Kindle would be actually hold 1,000 books as claimed any more than Nooks do. And yes, I did try adding an sd card to store excess B&N ebooks. It’s impossible to do. The files can’t be read from an sd card. I like e-ink – way easier on the eyes if you read for several hours a day. Conclusion : I need a 4gb e-ink reader. B&N doesn’t have one. So, are the new Kindle Paperwhites 4gb or not?

1000 books will take 10 years to read if you read two books per week. That should be a lot more than the technical lifetime of the Kindle.

I Read 650 books last year. I’m looking at buying another with more memory. My record is four books in one day. So more memory is very attractive to me.

My daughter and I both ordered a paperwhite 11/28-12/14/14 and were both originally shipped the older 2GB version. the box says 2013 on the back on the old and 2014 on the new. the new box also says 4GB and the old box nothing and they are both different shapes. my daughter knew right away and complained and the replacement was a 2014. I just complained today and will see what replacement they send me. everyone I spoke to at amazon denied knowing anything about it even after talking to their Kindle dept.

Ouch. I’m surprised that Amazon had any of the older units left, but I think you’re right to push for them to swap the old unit with the newer 4GB model. I would want it just because the newer unit hadn’t been sitting on the shelf for as long, and also for the extra storage.

[…] In a statement to our friends over at The Digital Reader, the bookseller admitted that the storage […]

Well done to Amazon for finding a solution to hearing EBOOKS on kindle after they removed the earphone socket to slim down their models.

I have a kindle Voyage and have bought the special leads to plug into the device to hear 'voice view'. This was setup for those with sight impairment.

Great to know more people can have the pleasure of books – especially mine.