Amazon’s Conquest of Brick-and-Mortar Retail Stalls as it Gains a Partner, and Loses One

Amazon’s partnerships with college bookstores spread to America’s heartland today. Purdue University, located in West Lafayette, Indiana, has just become the second US university to sign up as an Amazon affiliate.

The Purdue University Bookstore is joining UC Davis Bookstore in a special program that enables the bookstore to earn a 2% affiliate fee for any purchases that their students make through Amazon. Items bought through the Purdue storefront on Amazon.com, or by Amazon Student members who list their affiliation with Purdue, will generate additional revenue for the bookstore.

Amazon is also going to be the official textbook supplier for Purdue. This is expected to save students money, although it is too early to say how well that will work out.

Purdue is also joining a growing number of schools like UC Davis and the University of Texas at Austin in deploying Amazon deliver lockers on campus, to better serve price-conscious students who have irregular schedules. 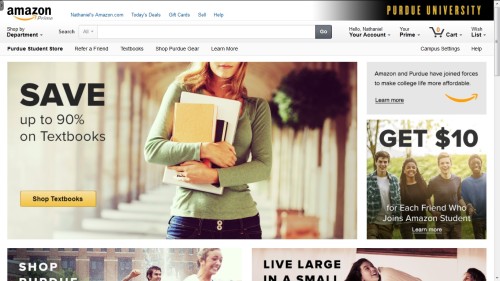 "This relationship is another step in Purdue’s efforts to make a college education more affordable for our students," said President Mitch Daniels. "With the pressure on college campuses to reduce costs, this new way of doing business has the potential to change the book-buying landscape for students and their families."

Initially launched as a pilot program with UC Davis last fall semester, this program enables Amazon to recruit college students as customers while also providing a funding source for  university bookstores. While it has not attracted very many partners so far, the director of the UC Davis Stores has said that the bookstore earned $82,000 in fees in the first three months, and $57,000 in the second quarter. "We’re excited to tell our campus community how this new partnership is paying off," Jason Lorgan said. "When you start your shopping at davis.amazon.com, you’re helping our students."

That $137,000 might sound like a lot, but not in comparison to the bookstore’s annual revenues of around $20 million. This negligible additional revenue might explain why so few college bookstores have signed up with Amazon.

Amazon is a powerhouse of an online retailer, but they are still weak when it comes to the physical world. Amazon has been addressing this need over the past couple years by deploying vending machines, signing retail partners, installing delivery lockers, testing pop-up stores, and by signing indie retailers to a special affiliate program called Amazon Source.

I recently started looking into Amazon offline retail efforts, and while Amazon Source has had little visible success, the locker program is growing by leaps and bounds. Amazon has installed hundreds of locker across the US, including ones both on and near college campuses.

A handful of schools, including Bellevue College in Seattle and Cal State Fullerton, now have Amazon lockers on campus, but a larger number of US colleges, like my alma mater, UC Berkeley, and UC San Diego find themselves besieged by an Amazon Locker located in a convenience store just a few blocks off campus.

Amazon is likely targeting college campuses because well, students are the future, but also because on-campus dorms aren’t the most secure environment. According to one UC Fullerton spokesperson"One of the things we heard a lot from students is students that live in apartment settings that may be using Amazon for delivering packages, that idea of having that package sit at your doorstep while you’re in class made folks nervous," said Kurt Borsting, the director of Titan Student Centers.

(Coincidentally, I started researching Amazon Lockers a few weeks ago just to see what I could find. My digging didn’t lead to any revelations, but I did identify several of the Amazon distribution centers in my area; they had Amazon Lockers installed out front.)

I’m glad to see Amazon gain a new partner today, because they are not having as much luck with one of their other programs, Amazon Source.

Launched in November 2013, Amazon Source was intended to to enable small retailers to sell  Kindle hardware in store and earn a commission from any resulting ebook sales. Booksellers were overwhelmingly hostile to the idea, so it probably won’t surprise you that no additional partners have been announced. In fact, one of the two bookstores named when Amazon Source launched was only technically part of the program.

According to Barbara Racine, the Bookstore Manager at the University of Puget Sound, the bookstore only ever bought a single Kindle as a test – and they still have it. According to the email she sent me in June, the University of Puget Sound is still technically an Amazon partner because "Well, we still have that one Kindle, so maybe we’re still part of the project!"

I would suggest that that bookstore was never really part of the program, but the point could be argued either way.

In any case, the Amazon Source program has one known active partner, an indie bookseller in Washington by the name of JJ Books. Amazon won’t name any of their other partners, but they did say that:

We have dozens of retailers in the US that are using this program, and this is split between bookstores and non-bookstores. In terms of specific stores, we aren’t sharing their info at this time but as the program develops we’ll be sure to keep you posted.

I’m not sure I believe that claim. I’ve asked around, and my source at the American Bookseller’s Association did not know of any, and my contact at NACS, the National Association of College Stores, could not name any either. Surely this info would have made the rounds; there are circles where it would be juicy gossip.

But even if Amazon’s statement is completely true, with "dozens of" members the Amazon Source program is still much smaller than the competing program from Kobo. According to Neil Strandberg, around 500 indie booksellers are partnered with Kobo to sell Kobo hardware and earn affiliate fees on ebook sales.

That is around the same number which had signed up by April 2013, and far short of the 1,000 that Kobo had hoped would sign up by the end of 2013, but on the plus side Kobo still has a far larger bookseller affiliate program than Amazon.

I expected a mention of localregister.amazon.com

Indeed, I should mention it.

The thing is, most of this post was based on work I had been working on for about a month. I didn’t think to add to it.

If Waterstone’s in the UK is anything to go by, even those booksellers that do sign up will be making the least possible effort to make it work.

Most – possibly all – Waterstone’s stores have a table in a dark corner with a Kindle display. dark being the operative word. Lighting appears to be deliberately lower than anywhere else in store. A handful of display Kindles on stands can be man-handled – usually by children who think they are some sort of game device – and a scattering of leaflets explaining what the Kindle can do will be on the table or more likely on the floor. A token display case by the till will hold a few boxed Kindles for sale and the usual way-too-expensive accessories..

Staff aren’t keen to discuss sales of Kindles and the few staff that are actually knowledgeable about the devices aren’t overly keen to recommend them and certainly won’t raise the subject unless asked.

As several staff members have said off the record, "Why we we want to send customers to our biggest rival?"

Our guess is Amazon made James Daunt an offer he couldn’t refuse, to pre-empt B&N partnering with Waterstone’s, as was then widely speculated. Daunt played them for a fool, took the money and has done the absolute minimum since to adhere to the letter of the deal.

Hopefully that contract will end some time soon and Daunt can oust the Kindle display and give it over to the Waterstone’s ebook store (supplied by OverDrive).

Waterstone’s ebooks has stiff competition now from Sainsbury and Tesco Blinkbox, and was anyway never going to seriously challenge Amazon, but as the UK’s biggest b&m bookseller it ought to be able to hold its own against W H Smith Kobo and Apple, and be well ahead of the other UK players like Nook and Hive and the token retailers like 'txtr UK.

The domestic UK stores will get a boost in January when the Luxembourg loophole closes and Amazon and co. are forced to charge the same rate VAT as the Waterstone’s, Sainsbury and Blinkbox, etc.

More power to Blinkbox and Sainsbury. More woe for Amazon UK who are desperately price-matching everything the two supermarkets do.

It is actually Cal State Fullerton (or CSU Fullerton), not UC Fullerton.

Thanks. I’ll fix it.

[…] we might even see this idea replicated on other college campuses. As I pointed out last August, Amazon is encircling US universities with delivery lockers located in off-campus convenience stores. If the Purdue location works out, […]

[…] Amazon's past retail efforts, which focused on vending machines, delivery lockers, and pickup/dropoff unstores, the new Amazon Books has actual books in stock on its shelves, as […]