Apple to Take on Digital Textbooks Next Week in NYC 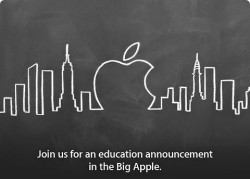 Word is going around today that Apple is sending out invites. that rumored NYC digital publishing event is indeed happening next Thursday.

And yes, I have an invite (via eBookNewser).

As you can see from the image at right, this event has something to do with education. Given that Apple is a tech company, we’re likely looking at some type of digital textbook announcement.

But I don’t know what that could be. Here’s what the NYTimes Bits blog had to say:

The event will showcase a new push by Apple into the digital textbook business, but will not feature any new devices, according to a person close to the company who did not want to be identified talking about it before it occurred.

The thing is, I don’t see how Apple plans to make a buck if they enter the digital textbook market. This isn’t a market that is primed for growth (like ebooks). On the primary and secondary school levels textbook purchases are dependent on taxes, which is a finite supply as well as down this year in most places. And on the college level, students are buying fewer textbooks each year.

Then again, maybe Apple knows something I don’t. Maybe they’re not in this for the direct profit. On the other hand, they might have pulled off some amazing technology that they want to show off. We’ll have to wait and see.

Yeah, here is Jobs' thinking of how to get blood out of that stone:
http://mikecanex.wordpress.com/2012/01/11/what-steve-jobs-thought-about-textbooks/

Replace your 150 dollar textbooks with a 700 dollar angry birds/facebook machine!

Maybe Apple has written software to implement a real-world version of the Young Lady’s Illustrated Primer. (The hardware already exists.)

…software which knows the local curriculum requirements, keeps track of how the student is doing, what they’ve mastered and where they need more work, software which can figure out what sorts of exercises or instruction would best-help that particular student (based on their learning styles, interests and aptitudes): drawn from reams of educational content – ebooks, video lectures, quizzes, movies, projects… Some of that content is free and some of it is paid-for, but the latter is only bought when needed (on demand, just in time).

These ideas have been around for a long time (e.g. the Dynabook). There are businesses and nonprofits implementing some of them. Apple can give them some unifying tools and leadership.

Maybe Apple will be expanding iTunesU to include for-pay textbooks, video- and audio-lectures, and apps … all while collecting their 30% toll on the way. And maybe jawboning textbook pubs into lowering prices?

[…] to their source, Apple’s news this week isn’t about selling digital textbooks, like I previously assumed; it’s about making them. Apple is slated to announce the fruits of its labor on improving the […]