The Archos Gamepad 2 briefly showed up online yesterday, confirming past reports that the French tablet maker was working on a sequel to last year’s Gamepad.

Based on the leaked specs, I would say that this PSP-inspired Android gaming tablet will be about the same size as its predecessor only with more storage, more RAM, and a faster CPU.

The GamePad 2 will feature a quad-core 1.6GHz CPU with 2GB of RAM, 8GB or 16GB of storage, a microSD card slot, and front facing camera and speakers. That’s twice as many CPU cores and twice as much RAM as on the first Gamepad, and the new model will also sport a higher resolution 7″ screen (1280×800). That’s not an amazingly wonderful screen resolution any more, and in fact it’s been showing up on some budget devices like the Tesco Hudl.

There’s no mention of an HDMI port, which the first model had, nor Bluetooth, which it lacked.  But I only have partial details so that doesn’t mean anything. And I also don’t yet have details on the camera  resolution. 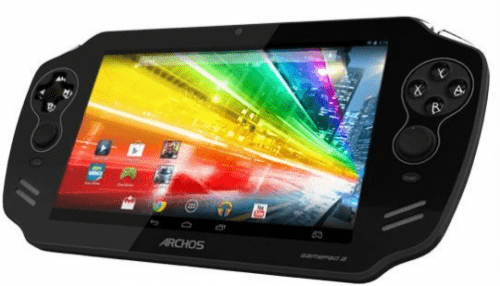 As you can see in the product image, the Gamepad 2 looks a little different from its predecessor but it retains the same basic shape.

The GamePad’s chief claim to fame was the gaming controller buttons grafted on either side of the screen, and the Gamepad 2 is no different. It has a 7″ screen with joysticks paired with no less than 12 buttons on the face of the tablet as well as a set of shoulder triggers on the upper edge.

Most games on Android are designed to use a touchscreen, but a growing number can also use physical buttons (console simulators, for example). Archos has included a button mapping tool so gamers can customize the actions to fit their playing style.

There’s no word on the release date, and Archos hasn’t even announced this tablet yet, but some are speculating that it will show up in time fort Christmas.