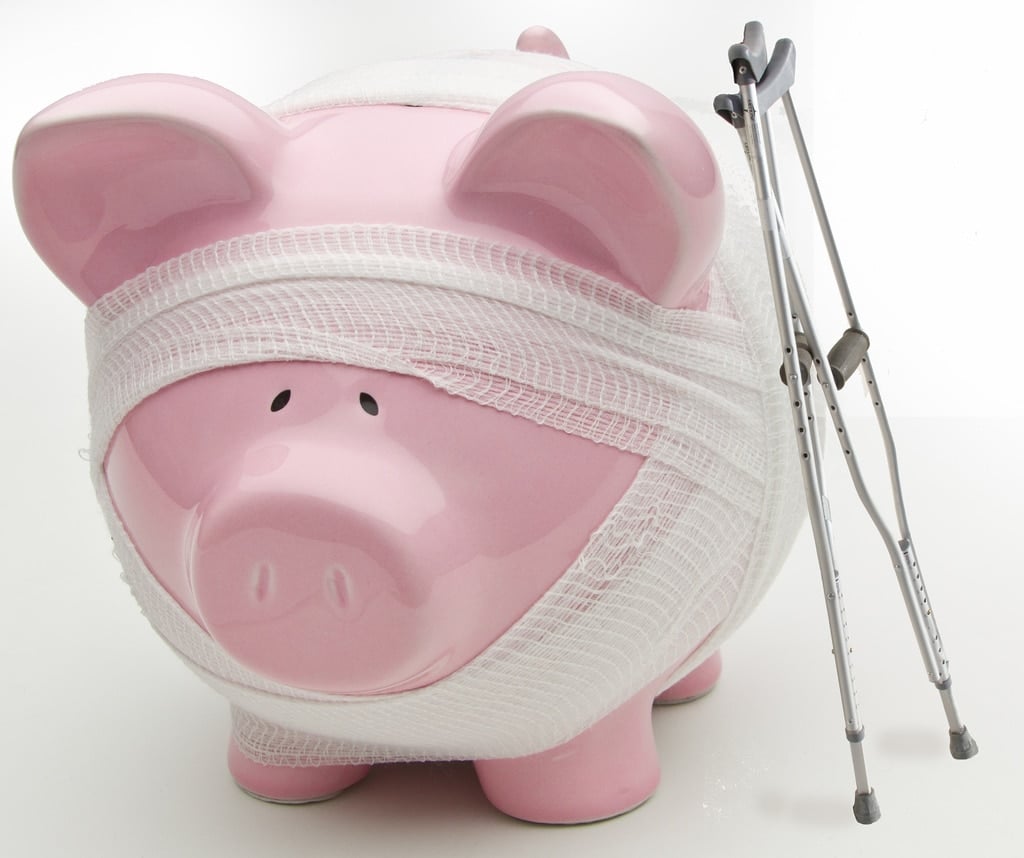 When it shut down just over 2 weeks ago, indie ebook retailer All Romance eBooks gave customers just 3 days to download their purchases, and more importantly, it offered publishers and indie authors ten cents on the dollar for unpaid royalties on the condition that they agree to not sue. 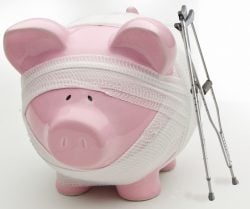 That did not sit well with the authors and publishers. only around 11% have stated that they accepted the offer, and now one of the holdouts has filed a class action lawsuit against ARe and its owner, Lori James.

I am still waiting for a text copy of the announcement, but here is what we know so far: 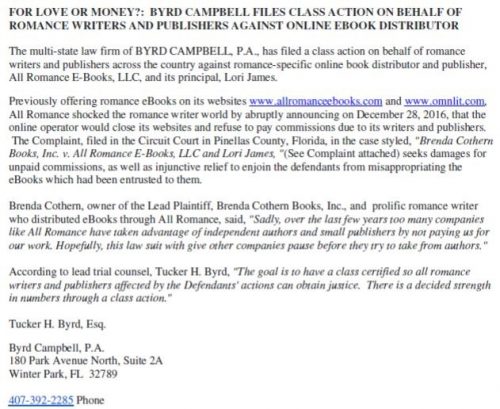 The press release was initially posted to a private FB group; while I was waiting for permission to post it publicly, Writer Beware beat me to the punch.

Individually, the money owed to authors and publishers would be regarded as unsecured debts. They would be the last to be paid in a bankruptcy and might get paid even less than ten cents on the dollar.

But as a class, they might have a better shot at getting assets.

Assuming there are any assets to go after.

As Kris Rusch pointed out last week, ARe had been failing for a couple years – at least. What looks like an abrupt closure is really the final stage in a slow downward spiral:

They are threatening bankruptcy. Since authors are unsecured creditors, most authors will see no money at all in a bankruptcy.

In fact, I expect the writers who opt for the 10 cents on the dollar solution will not be paid either.

Why do I expect that, besides experience with this kind of thing? Primarily because of the ad blast. The blast wasn’t ARe being venal. It was their last-ditch attempt at raising enough capital to save their business.

ARe had run ahead of their money since they started. They used today’s money to pay yesterday’s bills. They had no profit. So they were floating money—payments to authors, payments to creditors, payments like website and rent.

That’s why ARe’s technology grew antiquated, why they weren’t keeping up with the times, why payments in some cases were late or impossible to get. They probably got a line of credit too late or they didn’t have one or they were borrowing off credit cards.

Rusch had pulled her titles from ARe once it was clear that ARe was no longer tracking sales correctly. That was a couple years ago.

If ARe has been pinching pennies for that long, struggling to get by, then it would mean that by this point there is nothing left to the retailer but debts.

Assuming, that is, that James has any assets left to fight over.

Insert here: that Gilbert Gottfried line about having a heart attack and dying from not-surprise.

I wish the authors luck and hope they start a gofundme account so others can contribute to the legal fees for this lawsuit. I know I will be among the first to contribute. Even though I’m a reader and wasn’t ripped off as much as the authors, the rage I feel against Lori James on behalf of authors and readers has not abated at all. This criminal needs to be held responsible for her actions.

I had about 20 books to download. Never received notice that the site was closing down. It’s a shame I really enjoyed some of the authors and lots aren’t available on the kobo site. ??

Well considering thoes of us that found out last minute and during a holiday season at that had no luck of downloading our entire libraries. I hope when things are settled we do get that chance. They should always remember Karma!

I only had 15 books to download after their notice of closing, I usually download the day of buying (1000+ in library). The only problem I had was trying to buy a book and it disappearing after said sale and the site crashing. It took about 10 days to get it refunded (I made sure to keep hounding them).

[…] abounds, and a class-action lawsuit has been filed against the company and its owner, Lori James (ow.ly/DUdI308gZ1G). For a comment from the Romance Writers of America (RWA), go to […]

[…] abounds, and a class-action lawsuit has been filed against the company and its owner, Lori James (ow.ly/DUdI308gZ1G). For a comment from the Romance Writers of America (RWA), go to […]

They were my first eBook site I ever used. I have over a hundred books in my library there that aren’t downloaded to my Kindle. This really sucks. Good luck to anyone that’s owed anything or us that can’t get to our books.

I am so upset about this whole situation. I have been a customer sense 2007.
I only had 1/3 of my books stored on my tablet. I cant believe I lost all those books. I really miss reading books by my favorite authors. I had 35 books to download and was unable to do it.

All romance ebooks this was the first ebooks site i used was very happy with them. i brought a lots and lots of books and never received anything notice from them. i never got the chance to download all my books. i happen today and go and try to download my books and i see this notice online that they shutdown. i spendt a lot of money on this site. i want my download books. anyone know any other news? i have to rebuy these books thru amazon now.

Sorry, there is no news and you should consider those ebooks to be lost forever. Court cases can take years and the owner of the website likely has no money.

What likely happened is the site had a good quarter, so they assumed the next quarter is going to be just as good so they pre-spend money they don’t have yet, so when the next quarter revenue is down there is no money left to pay the bills.

Some of the authors are offering to send you the books (at a loss to them). Some require you have proof of purchase others don’t. You’d have to contact each author individually and ask. Good luck!

I’m so Friggen P***ed!!! I Just found out today that all romance.com shut down!! I never received any email from them notifying me when the website shut down last year!! The only reason I found out was because I hadn’t read any books or ordered any since last year and was just checking out the site to see if anything new was going on. Well apparently there was, I just didn’t know about the fact they shut down there website and while I have some of the books that I had downloaded. I lost about 50 or more ebooks because I was notified. Unbelievable!! I’ve lost allot of money and books and there’s not a dam thing I can do about it!! ?????????????

just found out about the closing,,how can i get my downloads books

I found out about this after everything closed down. They obviously knew me since I complained a lot about downloads. I had over 1000 books in the site and I know I had about 100 plus that I had not downloaded at all. They should reintroduce the site for the people who purchased and give them a month to get their books out of the site. That would be the most fair thing to do.

Ummm I just went to download books I bought and surprise!!!! I feel as if I’ve been robbed. I guess in a way, I have. I hope they’re forced to make our books accessable to us again.

[…] owner Lori James is being sued by a class of authors, so one would think she would maintain a low […]

They were my first eBook site I ever utilized. I have over a hundred books in my library there that aren’t downloaded to my Kindle. This truly sucks. Best of luck to anybody that is owed anything or us that can’t get to our books.

I agree with you also being the first site I brought my ebooks. I was very pleased and I also had over hundred ebooks and was not able download any of them to my kindle, and also because I was unaware they were going out of business. When I went to download my books it was pass the 3 days. I lost money I put in my purchase of my ebooks. I was buying over 5 books every two weeks. I was so disappointed like others who were also. My email was [email protected] yahoo.com. I even contact them by email about my ebooks, but it was too late.