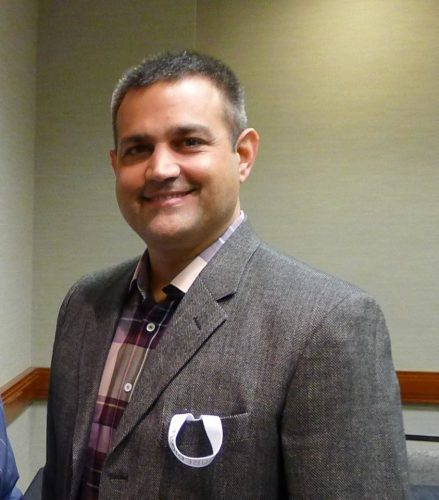 For the past few years one of the most widely known "secrets" was the identity of Data Guy, the pseudonymous creator of the Author Earnings Reports (at right).

Many people in book publishing knew the name of the person who had upended the book publishing industry with his market analytics reports (including the companies which had hired him as a consultant), and thousands of people who listened to him speak at conferences knew him on sight.

According to his LinkedIn profile, the CEO of Bookstat, the company founded by Data Guy, is a former gaming exec by the name of Paul Abbassi.

Edit: Just so you know, I didn’t actually know Paul’s name until this morning. I was not in on the secret, so I had nothing to betray.

Formerly the CTO at Digital Chocolate and the VP of Data Analytics at MaxPlay, Abbassi has two Master’s Degrees in electrical engineering, as well as a bachelor’s degree in mechanical engineering from Berkeley.

He has a decade of experience in running gaming companies, and then in 2012 he turned his attention toward book publishing. According to his profile his various projects include Booklead.com, a now defunct deals site, an unnamed company that aggregated book reviews, and then there’s this entry:

While I do not have explicit confirmation that Paul Abbassi is Data Guy, that description is specific enough for me to safely say that I found the right guy. Furthermore, Abbassi 's profile photo bears a striking resemblance to the person I met as Data Guy at DBW 2015 (shown above).

I have queried several sources, including Data Guy, for confirmation, and no one responded at the time I published this post. If you can confirm his identity, please leave a comment below.

Wri.tt is a Distraction-Free Writing App

He gave a presentation at the Nebulas, and it looks exactly like him.

Thanks! I didn’t have the video!

This totally makes sense, as Digital Chocolate was run by EA founder Trip Hawkins. He was known for his intense reliance on competitive analysis. Paul may have built the spider-crawlers to data mine the then (approx. 2013-2014) just exploding growth of the Apple AppStore.

I think DG did mention to me at DBW 2015 that he first did the spidering in his day job at the gaming company, yes.

Well, all I did was search for "Bookstat" on LinkedIn. The amazing part is that it took this long for someone to do the search.

Supposedly Data Guy himself revealed his true identity at DBW 2018.

"Data Guy," the long anonymous publishing industry analyst, will reveal his actual identity on stage at Digital Book World 2018, while also unveiling Bookstat – the data-driven service which has the potential to solve the longstanding industry problem of insufficient, incomplete real-time sales data."

I’ve since found absolutely zero coverage of that speech, if it happened.

But the keynote speech slideshow is on the Author Earnings site, and I’ll be taking that apart over at The New Publishing Standard in a post to go live in the next hour.

I couldn’t find any evidence of that either.

They never posted videos of the talk, but I was there, this is him.

Oh, I forgot to follow up on this but he didn’t follow through. DG was supposed t reveal his identity, but this detail was not mentioned in his speech (or so I was told by someone who was there).

The real question at this point is, why the aura of mystery? Most people don’t run their company or professional life under a nom-de-plume.

Well, there was a time when DG was controversial, and it may have made some sense back then. But that stopped being true well over a year ago.

I’d say DG is more controversial than ever. Just that mere mortals can;t afford the access to all the BookStat data.

But as per the latest TNPS post, when we do see some numbers they appear to made on the fly, he rewrites historical data to suit whatever the latest numbers are, and the numbers just aren’t credible.

Who but Data Guy could manage to count the world’s most famous author JK Rowling twice and not notice?

I would also suspect no one outside the book industry really cared. Outside the industry, no one knew who DG was, and now that we know, it’s not remarkable. Now, if he was Jeff Bezos or Thomas Pynchon…..

TRIMIY – Your Digital Pal For Solutions On Web & App, Media and Design | You Don’t Need Ads on Your Site to Monetize Your Blog. Here’s How Bloggers Make Six Figures. 16 October, 2019 um 8:08 pm

You Don’t Need Ads on Your Site to Monetize Your Blog. Here’s How Bloggers Make Six Figures. – Digital Marketing News 17 October, 2019 um 12:26 am

[…] Data Guy will be speaking at The Bookseller's conference in a few weeks. BTW, last year I unmasked Data Guy as Bookstat CEO Paul Abbassi. […]