E-ink’s fancy looking wall hanging got a lot of press this morning due to their press release but that’s not the most interesting gadget in their booth.

In addition to the Yotaphone 2, a new messaging platform, and that aforementioned wall hanging, E-ink also had a prototype 13.3″ USB monitor on display. It’s called the PaperLike (I think). 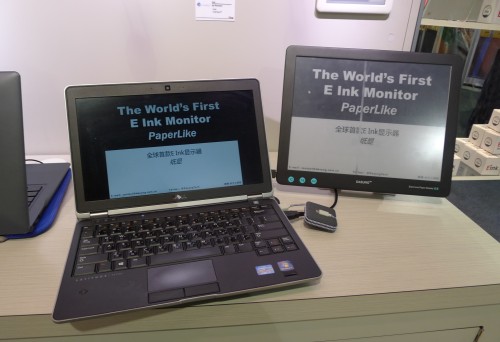 In case you were wondering , yes, the stripe down the center of the E-ink screen is a defect.

The monitor was on loan from DaSung, one of E-ink’s Chinese partners. It was launched late last month in China but only came to my attention today. It uses a 13.3″ Fina E-ink display (screen resolution 1,600 x 1,200) to mirror what you see on the paired laptop.

It’s powered by the USB connection to the laptop, and is surprisingly fast. As you can see in the video below, the monitor has several display modes. In addition to the standard 4-bit 16 level grayscale mode found on your ereader, there is also a mode with only 5 shades of gray as well as a mode with 2 (black and white, basically). The faster modes sacrifice detail for speed, resulting in a refresh rate which is almost as fast as an LCD monitor.

I was told by E-ink that it is still under consideration, but according to what I read on Chinese language sites, the monitor is available now with a retail price of 4,999 yuan, or about $804.

Allow me to take a moment and express what we are all feeling: Damn.

I don’t know about you but if this were offered for $400 I would have ordered one already. But at this price I’m going to have to lean on E-ink to get DaSung to lend me one.

Well, at least it looks pretty. 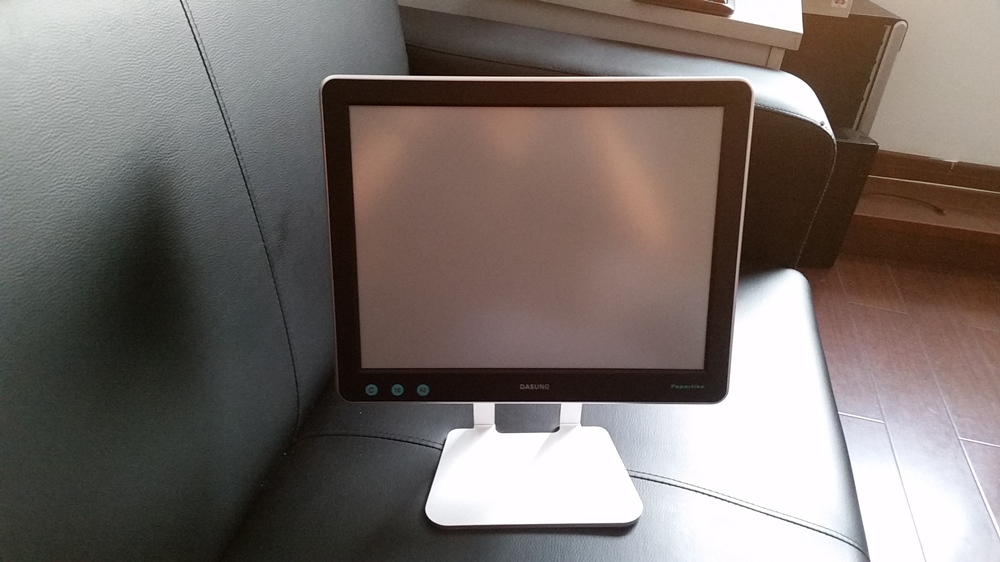 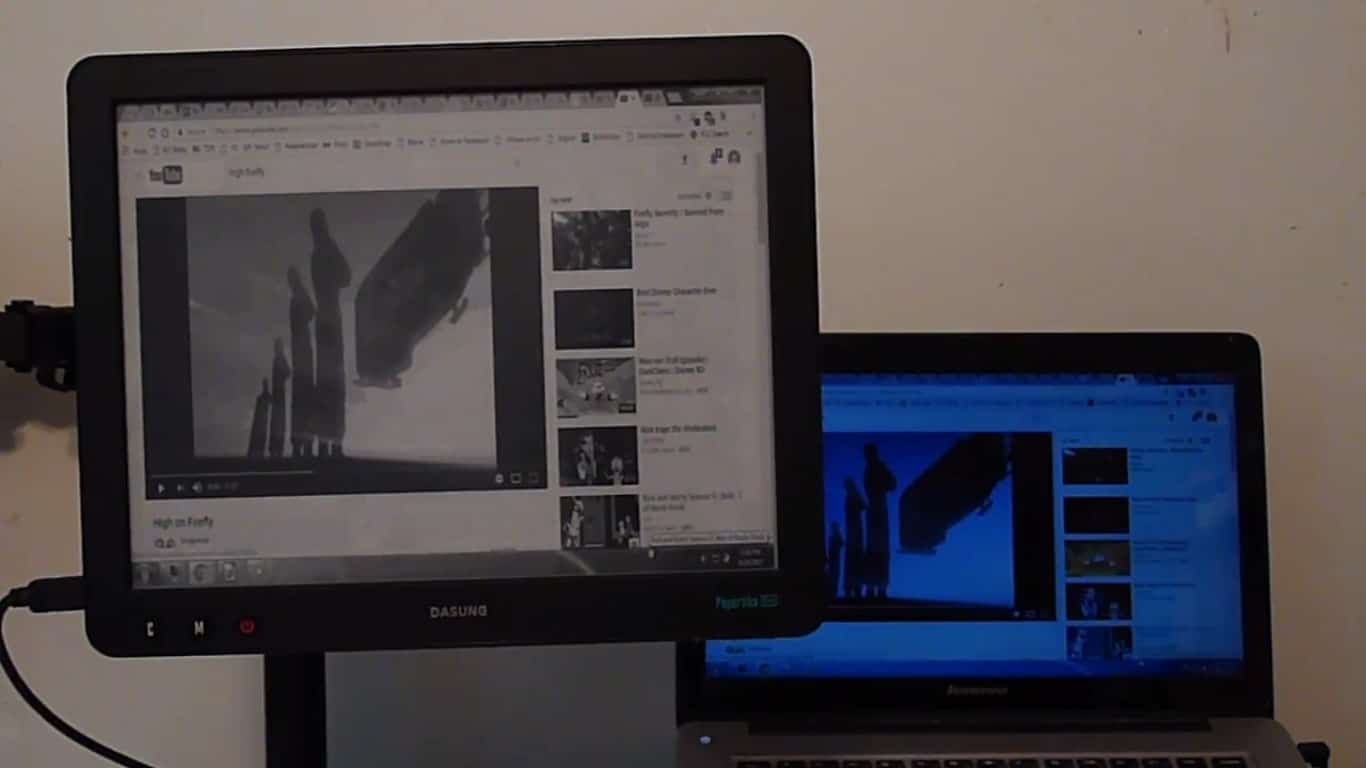 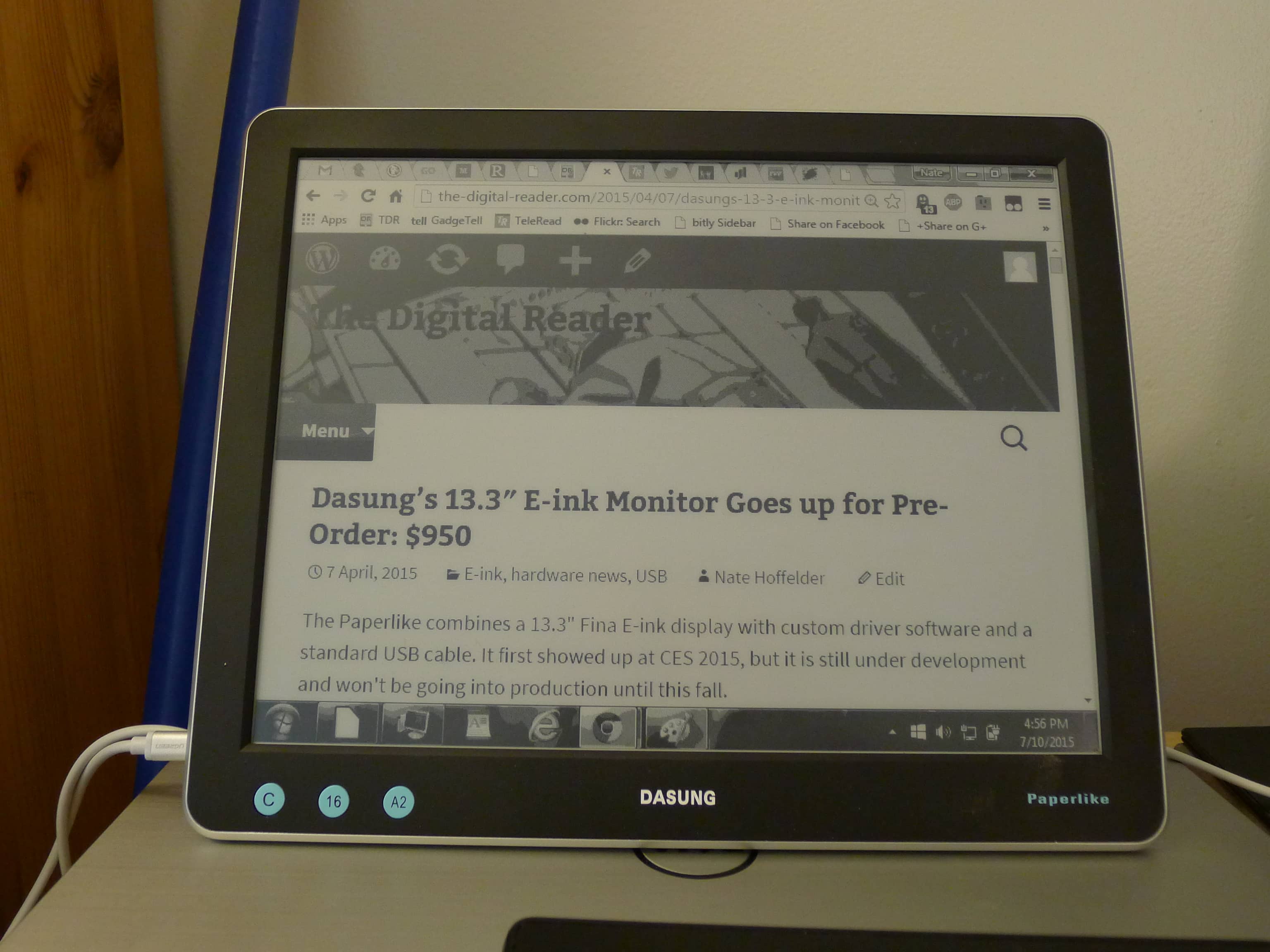 From that video https://www.youtube.com/watch?v=vny-JTpt-aU it seems that the name is simply "PaperLike".

Hi Ray, thanks for the confirmation from DaSung!

Hopefully it doesn’t have to duplicate the color screen.

It could be an extended monitor!
I am from Dasung. We will release more information on our Twitter @DasungTech

Its probably a bad sign that the only one they have to display has a big defect.

It is really a pity…. The monitor transfer from Beijing to Taiwan to Vegas… It must be broken on the trip.

I am from Dasung. We will release more information on our Twitter @DasungTech

Looks amazing in the video. Its very fast and doesnt flash. Its totally usable as an LCD replacement for most office type work. I want one. At $400 I’d be in.

I am from Dasung. We will release more information on our Twitter @DasungTech

It is really fast! I wish there would be a ereader with that speed!

Good point. I wonder why.

The Chaplin scene from Modern Times at the end looked watchable on that E-ink screen. I wonder what color depth was used to achieve the necessary refresh rate. I definitely want an E-ink monitor. However, they need to get cheaper and must increase their dots per inch.

After Apple and Dell, HP now also has announced a 27 inch 5K monitor (207 dpi), and HP wants $1300 for it. That makes $800 for this 150 dpi E-ink screen look too expensive. Every close-distance E-ink screen should at least have 200 dpi. That’s what the Kobo mini has. I found 800 x 600 pixel 6 inch devices to be lacking in pixel density. Pixels are too easily distinguishable on them.

Speaking of the Kobo mini, I wonder what could possibly be the problem to make scrren 9 times the size of a Kobo mini’s screen with the same pixel density (which would yield a 15 inch screen at 200 dpi). And since it’s just the screen, it should also be cheaper than 9 Kobo mini devices (which had an extra shell, battery and main board). Yet, this 150 dpi 13.3 inch screen seems to be more expensive instead. I don’t understand, why.

Wow that’s fast! This fast refresh rate on a maybe 6 or 9 inch E-Ink Android tablet would be the perfect e-Reader ever made! srsly

I wonder if a manifacturer could achieve a simIlar effect using a matrix of 6″ screens as opposed to one large screen. It would be cheaper and more robust.

That can be done, but if you tried to use it as a monitor you would see the seams.

Oh man, for epaper that monitor is extremely responsive! It looks like it would be more than sufficient for office programs, web browsing, and programming itself. And one of those screens with stylus input (ala a wacom tablet) would be just as amazing.

For me and my eyes, this is basically a dream come true! I really hope we’ll see more of this!

I am very much interested in buying this external monitor. I have severe headache if I use computer for long time …

I am hoping to use this as a secondary monitor for reading and coding.

Sadly, it’s not even shipping yet in China.

Then when would you start shipping..This kind of screen is very good for people having photophobia which can be due to dry eye syndrome or migraine as it does not strain our eyes like normal LCD screen,i have tried amazon kindle.I am a patient of dry eye syndrome.

I have severe sensitivity to light. I cannot use an LCD transmissive back lit monitor – of which 99.999% of monitors are – for more than 30 minutes without severe pain.

I have had to hack Kindle DX units in order to use them as a monitor and although it works, it is not productive. I have also used PixelQi monitors which use transflective technology, and allow the back light to be switched off. These work perfectly well and I have no eyestrain issues with them, but they are no longer made.

This monitor is a major breakthrough, and I’ve been waiting a long time through to happen. I hope they go to market my ability to use a computer depends on.

I also became intolerant to LCD back lit and energy saver florescent lights. BTW I wasn’t always intolerant to them it just happened overnight. At the time I didn’t know what the issue was, Optometrist would just recommend prescription eyeglasses, but they weren’t listening me when that I could read paper book all day without glasses!

Luckily found this web page, understood I’m not alone, and that Optometrists are not yet up to speed to the issue of the LCD technology (saves your laptop battery)
http://www.medhelp.org/posts/Migraines–Headaches/Light-sensitivity-to-fluorescent-lights/show/761234

After figuring the source of my issue, started using external mate monitor (DELL ST2410) to my Retina Mac Book Pro (would just mirror the screen and turn the mac brightness completely off).

Was just reading the book "The everything store", the store about amazon and when I came to the part how they build kindle and that it has e-ink display, I was hmmm let me google if monitor alternative exists and here I am on the page.

So optimistic that there is prototyping this route, I thought I’m doomed that future is all about LCD and I have to stock pile CCFL monitors :):):)

Oh and please don’t wrap glare/reflective plastic around the screen or offer both version (Apple dumped us when stopped the mate versions 2008/9)
https://discussions.apple.com/thread/1677617?start=2160&tstart=0

Luke i have the same problem..i would like to talk to you..Can I get your email id..or u can contact me on [email protected] ,,,, plz…need ur help..

How did you hacked kindle

I have difficulties with the Pixel QI. I just bought myself one, and although it’s confortable for a moment, but after some hours, I begin to have headaches again, because I can’t see 100% clearly. So I try to increase the light (all sort of lamps), but the more I add lamps, the more headaches I get, because the light is too strong, even when it just reflects on the monitor (the lamp is behind me).

Thanks for the info. I had been wondering about Pixel Qi’s suitability for this purpose..

Hey eturgeon,,I am going to buy pixel qi….Before that I think i should talk to you..Will you give me your email-id ? Or you can contact me to [email protected] ..I need some more feedback about it..

I sympathise with Luke.

Most forms of artificial light, especially backlit LCD screens are migraine triggers for me. This is quite common amongst people who get migraines (10% of the population?). The Paperlike sounds like a godsend as my limited capacity to use computers impacts on a daily basis on my job and employability. The only pain free way of using computers I have found is a hacked kindle dx. But the small screen sized and sluggish refresh rate make using one very slow and frustrating.
Given this the price really isn’t an issue.

How did you hacked kindle ?? Plz help me

Please send a letter to [email protected], we will tell you how to order one.

Please send a letter to [email protected], we will tell you how to order one.

Thanks! I’ll send one too!

I am just writing an E-mail for you:)

I await your email.

I didnt get one

I have mailed twice to [email protected] but have’nt got any response yet..Visited Dasung’s website bt couldnt get anything as everything was written in chinese.. You can send me the details at [email protected] …..Ray can I get your Email-id // I would like to order one.

[…] a 13.3" Fina E-ink display with custom driver software and a standard USB cable. It first showed up at CES 2015, but it is still under development and won't be going into production until this […]

The Dasung rep said to send an email to: [email protected]

I have already mailed… But sending once again

DASUNG eink monitor is on Indiegogo campaign. Very cheaper than before

Thanks for the heads up!

[…] of a kind USB-powered monitor based around a 13.3" Fina E-ink display. It first made an appearance at CES 2015, but despite press reports to the contrary this device has not yet been released to the […]