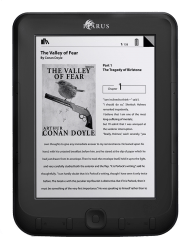 Remember the Pyrus Mini, that ereader with the 4.3″ epaper screen which E-ink insists ripped off their proprietary screen tech?

Guangzhou OED Technologies, the Chinese company that made the screen on the Pyrus Mini, has apparently branched out into other screen sizes. E-ink has not raised a stink about this because they were probably hoping that no one would notice, but I’ve just learned that a new 6″ ereader from the Dutch company Icarus appears to be using the knockoff screen.

What’s more, a brief glance through other product listings have revealed a number of different ereaders that appear to have some type of epaper screen that wasn’t made by E-ink (or any other screen company I know of).

I first came upon this story via a new product announcement on the Dutch ereader blog eReaders.nl. The covered a new ereader from Icarus. The Icarus Essence is a no-frills 6″ ereader that lacks Wifi or a touchscreen. It has 4GB of storage, a microSD card slot, and broad format support including Epub, PDF, Mobi, and more.

Just about the only detail that is worth noting is that the product listing says it has an epaper screen, while all the other Icarus ereaders have E-ink screens. That might be a small detail but it is a telling one, trust me.

Also announced last week (but not yet available) is the Icarus8, a larger ereader with Wifi, audio ability, and an 8″ (1024×768) epaper screen. I don’t think that is an E-ink screen either. 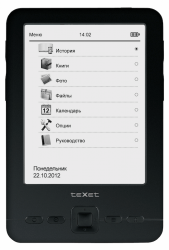 But wait, there’s more. It turns out that Trekstor, sellers of the Pyrus Mini, are also selling the 6″ Trekstor Pyrus and it too has a knockoff screen. TeXet, a Russian gadget company, has a number of ereaders with E-ink screens as well as at least one ereader with a 4.3″ (screen like the one found on the Pyrus Mini).

There are now 4 ereaders on the market in various parts of the world that clearly do not use E-ink’s screen.  It makes you wonder how many have escaped notice, doesn’t it?

It also raises the question of whether these screens really do violate E-ink’s patents. Surely 3 companies in 3 countries wouldn’t all put themselves at risk of a lawsuit without first going throw the technical specs with a fine tooth comb and making sure that the screens were legal.

Now I’m beginning to understand one of the conversations I had at CES 2013. I never wrote about it, but I met with the device maker who originally developed these ereaders before licensing them to teXet, Icarus, and Trekstor. The CEO of the OEM doesn’t want me to name his company, but he swore up and down that the knockoff screen was not a knockoff. He insisted that it didn’t infringe on E-ink’s patents.

I’m seriously beginning to wonder if he is correct; but for now all I can say is that there are details to this situation that I don’t have yet.

That might change in the not too distant future. When I was at Flextech last week I made sure to bring my Pyrus Mini with me. I left that ereader in the eager hands of the Flexible Display Center, and I handed it over with the understanding that they would dissect the screen and send me a report.

It’s going to take anywhere from a few weeks to a few months before I get an answer, but I do plan to get to the bottom of this.

okay, but we can’t wait a few months to know.

The 8in model sounds interesting.

No. You asked. But I am probably in a bad mood. As usual.

Is there a price difference between e-ink and this other epaper? I wonder if these screens are showing up on alibaba and similar outlets.

Yes. The other screens are noticeably cheaper – $5 or more.

Are these as nasty as the Sipix screens were? Remember the Pandigital device?

As I mentioned in the review of the Pyrus Mini, the new screens are as good as E-inks.

Knock knock. Who’s there? eInk. WHICH eink? VizPlex or Pearl?

Both, the Icarus8 and the Icarus essence are using OED epaper technology, as seen in the TrekStor Pyrus.

Roughly how much of the BOM of an e-reader is the screen?
Half an eternity ago (kindle 2) it was USD60 out of a USD185 total. I’d guess that all costs have come down significantly since then, but by how much?

The screen is the most expensive component by far.

The info I have from E-ink is from late 2011 when they were charging $35 and up. Now it is probably cheaper.

[…] competitor to E Ink. It looks every bit as good when it comes to displaying digital text, and is reportedly $5 – $10 cheaper per display, which is fairly significant. The only problem is E Ink is suing […]

So what did the guys at the "Flexible Display Center" say or did you never hear from them again ?

I followed up but they never responded to my emails.

[…] The InkPad has a Pearl E-ink display with screen resolution of 1,600 x 1,200, while the Ocean has a “knockoff” epaper display from E-ink’s Chinese competitor, Guangzhou OED Technologies. This screen has a resolution of […]

[…] ereader is based around an 8" "knockoff" epaper display from E-ink's Chinese competitor, Guangzhou OED Technologies. It has a screen resolution of […]

[…] jack for audio. Its screen measures 8", and includes both a touchscreen and a frontlight. It's a "knockoff" epaper screen with a screen resolution of 1024 x […]