ebook ereaders sold in the US are not accessible to the visually impaired, and thanks to a recent decision from the FCC things are going to stay that way for at least the next year.

The FCC’s Consumer and Governmental Affairs Bureau granted a waiver on 28 January which allows ereader makers to continue to avoid complying with a federal regulation on accessibility.

Back in August 2013, Amazon, Sony, and Kobo filed a petition which asked that their ebook readers be granted an exemption to a new accessibility regulation. They weren’t trying to avoid complying with all regulations, just one which was crafted in 2011. The companies wanted to avoid the requirement that Amazon et al comply with:

This particular regulation (parts A and B of a single rule) requires that makers of "advanced communications services" make sure those services are accessible to the disabled. It’s a generally good idea, and the rule was written broadly enough that it covers everything from ISPs to mobile devices like tablets and some ereaders (ones with Wifi or 3G). 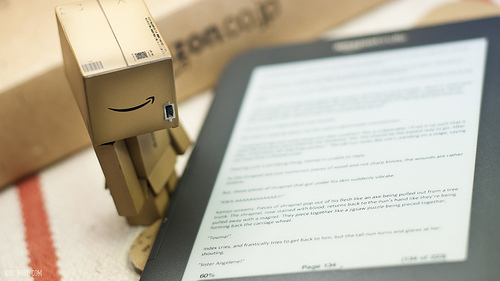 Of course, there’s a problem with applying this rule to ebook readers; by the time the regulation was written numerous models available on the US market could not comply. Amazon, Kobo, and B&N all had at least one ebook reader which lacked the sound capability that would clearly be a basic requirement. The basic Kindle, the Kobo Touch, and the Nook Touch were each completely incompatible with the new regulation, putting the device makers in the position of either junking their existing models and investing in new hardware , or requesting an exemption waiver.

Given the cost of compliance, and the limited value it would generate, I can understand why they asked for the waiver. And they succeeded – to a limited to degree. The waiver was carefully written so it only covers mobile devices that meet certain criteria. Tablets are excluded, and so are any devices that don’t meet certain limitations:

Those restrictions were spelled out in the original request, and the FCC basically gave Amazon et al the exact waiver they asked for.

The FCC shared their reasoning behind this decision. To put it simply, ebook readers might have email and other web functions but they are designed for reading:

After a review of the record, we find that basic e-readers are capable of accessing ACS, are designed for multiple purposes, and that consumers do utilize them for ACS, but, at present, we find that they are designed primarily for the purpose of reading, which makes such devices eligible for waiver under section 716(h)(1)(A) and (B) of the Act and section 14.5(a) of the Commission’s rules. To begin  with, we consider the design of these devices. The current relatively slow refresh screen rates, the absence of apps for integrated e-mail clients,82 the inability of basic e-readers to display video for any purpose, including video conferencing, and the lack of high powered processors on these devices support a finding that these devices at this time are not designed for ACS,

It’s worth noting that this is a limited waiver that only affects a single regulation, and does not exempt ebook readers from all accessibility regulations. (For example, libraries and other public institutions are still going to have to buy devices that are accessible to the disabled.) That’s a nuance many missed when this story broke in August 2013.

This waiver is going to be in effect until 28 January, at which point it will either be extended or allowed to expire. I would bet money on Amazon et al getting an extension; whatever new ebook readers introduced over the next 11 months won’t be terribly different from the models we can buy today, and I don’t see a reason why the exemption wouldn’t be allowed to stand.

Amazon, please unmute the Kindle Paperwhite: No need for the workaround shown in this video, when TTS chips cost next to nothing! – The Digital Reader October 12, 2014 um 11:47 pm

[…] only a few dollars at the most and perhaps just a fraction of that. I hope that the FCC, which has shown an interest in these matters, will crack down severely on Amazon if it isn’t more decent […]

[…] over a year ago the FCC granted US makers of ereader devices a limited exemption from complying with certain accessibility regulations, and this past week the […]

[…] exceptions, such as the situation in which Amazon, Sony, and other ebook reader manufacturers were granted an exception to the Communications Act of 1934, as Enacted by the Twenty-First Century Communications and Video […]