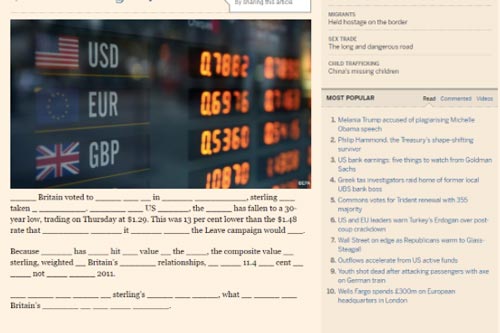 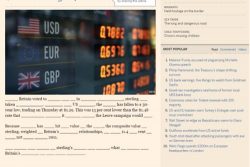 Web publishers have been trying a variety of methods to discourage the use of ad blocking plugins, including nag screens, paywalls, and outright blocks. Now the Financial Times is taking a new passive aggressive approach.

Ad Age reports that the FT is now turning its articles into MadLibs for a certain small percentage of its visitors:

The Financial Times is certainly not the first media company to test out approaches to combating the rise of ad-blocking technology, but its new approach might be the most creative one yet.

On Wednesday, the newspaper began blanking out, for some users, a percentage of words in articles symbolizing the percentage of the company’s revenue that comes from advertising.

The company will evaulate the results after three or four weeks.

About 20% of Financial Times traffic comes with an ad blocker running, which Mr. Good said is in line with the newspaper’s competitors. Hiding a percentage of words in articles conveys two messages, he said: There are consequences for using ad-blockers, and the Financial Times depends heavily on advertising to produce high-quality journalism.

It’s not mentioned here, but the FT also requires that you register or log in before reading an article, and that means they have a very good idea which regular visitors are blocking ads.

Although I don’t read the FT very often, I am one of those visitors with an ad blocker. I use AdBlock Plus, and the strange thing is I haven’t seen the new block. It could be that the FT’s detector is less than perfect, or possibly that Ghostery is also blocking the detector.

Have you seen the fill in the blanks on the Financial Times website?

I have never visited FT before, but I tried it after reading this story. In order to read an article I had to have an account and there doesn’t seem to be a free account option, other than a 4-week trial that requires a credit card. I will not be going back to that site.