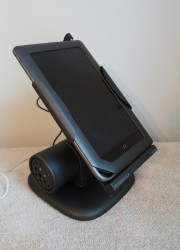 My new N-Station dock arrived late yesterday afternoon. It was too late then to take photos, but it did give me the chance to spend the evening trying to break it. This is a rugged little bugger.

The N-Station is the first dock for the Nook Tablet and Nook Color. It debuted just before CES 2012, and it got a lot of attention. But it seems to have dropped off most bloggers radar since then, and I think I might be lucky enough to post the first real photos.

Not that there’s anything wrong with photoshopped product images, but you never really know what something looks like until a real user gets their hands on it. There’s a gallery of photos at the end of the post which show it from multiple angles.

Most of the parts of the dock, including the base, shell, arm, and the docking niche itself are made from plastic. This is good; I couldn’t tell for sure but the early images looked like it was made metal.  Plastic is better because it’s less likely to scrape up the back and sides of the NC as I take it in and out of the niche.

The plastic is reasonably good quality. I spent quite a few minutes trying to snap bits off or fracture it and I couldn’t. The base is wide enough and heavy enough that it can hold the NC at any angle without tipping over. And I have been testing the various angles; the NC was always kept at the one I set.

The volume button is on the front of the base, with the power button, speaker input, and USB port in the back of the base. The 2 cylinders on either side of the pedestal are the speakers.  You’re definitely going to want to use them. The speaker on the NC is on the back, and at best it is rather quiet. Sound quality was reasonably good. The N-Station will charge the NC when it’s plugged in and you cannot use the speakers without being plugged in to something (power from my computer’s USB port was sufficient).

I’ve been taking the NC in and out of the niche all morning and I’m beginning to appreciate how it simply slides into place. I know that the N-Station is pitched as a media dock, but I think it has some value as a charger; it’s a lot easier than fiddling with the cables. Of course, by this point we are all used to fiddling with cables so there’s not much need to give it up.

All in all, this is a fairly nice gadget. The attractive shade of gray blends in well with my NC and doesn’t visually overwhlem the surrounding gadgets.

It’s up for preorder now on the ReaderDock website for $54. It should be shipping soon.

My local Borders store isn’t closing, is yours? (map)

Right now it seems a bit too expensive for what it does. I would not want to leave my Nook Color connected to this dock and out in the open for too long because of dust accumulation. I always keep the NC inside my Body Glove hard-sided travel case, since I take it with me to a coffee shop at least once a week. The Body Glove only cost me a little over $12 and offers rugged protection for the NC, and it fits the NC, well, like a glove. If the price of the dock came down to $15-$20, I might consider it. Or if it had a way to add a camera/microphone, that would be a real attraction, maybe worth even a higher price than now.