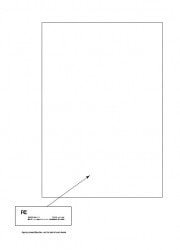 Last week I told you that Amazon sent their new Kindle Fire through the FCC, and today I think they decided to keep it company with a new ereader.

I’ve just found a new set of FCC paperwork from another anonymous LLC. This time around the company is called Hannaford LLC, and it has a different contact name and mailing address. But like the LLC mentioned last week, this one happens to reside in an office suite belonging to CSC. It also seems to be run by an employee of CSC.

Don’t you just love it when Amazon makes it easy for you?

While last week’s paperwork referred to a Wifi equipped tablet, this one mentions an "electronic display device" called the EY21. All the interesting details will be concealed until February, but there are enough hints in the tests conducted to suggest this is a device with both Wifi and 3g/4g (I don’t understand the frequencies) .

The tests mention that an iPod earbud was used, so clearly it has sound as well, but there’s no indication that they tested the frontlight. We can guess that this is an E-ink Kindle from the description (a tablet would be called a tablet), but I don’t think this is the frontlight equipped Kindle we had been hoping for.

So it looks like Amazon is planning to repeat their Kindle Fire event of last year. Some time in the next couple months we’re going to see a new Kindle Fire, a new Kindle, and a dock for the Kindle Fire.

Oh yeah, Amazon owns the trademark for the term Firedock. This word had originally been registered by Grace Digital Audio, and they planned to use it for their Kindle Fire dock (which is now called the Matchstick). The trademark now belongs to Amazon. Coincidence? I think not.

Now, I don’t know that the Firedock will be unveiled at the same time as the new KF and Kindle, but it would make a very effective Jobsian "one more thing" moment. And Amazon would sell a truckload. So I am pretty sure we’re going to see it soon.

Bloomberg Agrees With Me – Samsung Wants to Sell Liquavista …

No new TM filings. By Amazon or anyone.

[…] dock under a different name on July 17. That by itself isn’t much to write home about, but The Digital Reader points out that Amazon now owns the FireDock trademark. A little digging reveals that Grace Digital […]

I was thinking it might be the rumored smartphone, but the connection diagrams sure look like an ereader.

The dimensions look wrong, IMO, and a smartphone would probably not be called an electronic display device.

I don’t understand why there is any confusion. The document titled UBTDF Analysis Report clearly calls the device an e-reader on its title page and talks about the process for purchasing e-books. Unless I am misunderstanding something here.

Why would the FCC test a front light? Seems like all their testing pertains to radio waves, and a light wouldn’t affect that. So I don’t see why you’re assuming that since one isn’t mentioned, one isn’t included.

There are rules about how much EM noise interference a device can generate and still be sold.

The frontlight might have caused interference with other electronic equipment so it would need to be tested. They tested the audio, and pretty much the only reason to do that is to make sure there’s no interference.

Is Device Magazine’s Sanjeev Ramachandran just taking your article info without crediting you ? He seems to proceed in the order you do in describing thing he says they found. All other articles on this credit your blog and comes a day after yours.

Re what he says, all along people have expected they’d keep the basic Kindle fire for most economical model, but priced lower when they release whatever is next.

Sorry, I forgot to give you the URL for Deivce magazine’s article on this.