Charbax has gotten his hands on an early prototype for the Sonostar smartwatch. This gadget features a curved touchscreen, a daylight-readable E-ink screen, Bluetooth, and support for both Android and iPhones. 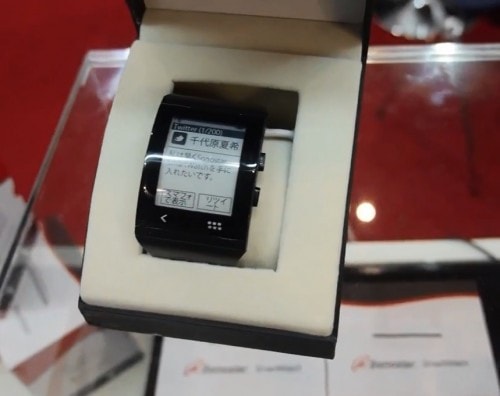 I don’t have all the details on this watch, but I do know that the screen measure 1.73″, and it has a resolution of 320×240. Sonostar is developing partner apps for both Android and iOS, though of course we don’t know for sure what info the apps will be able to display on the watch.

In the video below Charbax demos the watch with a partnered Android smartphone, but from the way he describes it I think the smartphone might be sending screen images to the watch and not any actual data. This watch is expected to ship in December 2013 with a retail of $180.

It’s not much of a smartwatch, IMO.

Is anyone else growing less and less impressed with the whole smartwatch idea? A lot of so-called smartwatches really aren’t all that smart – not in the way that a smartphone is smart.

I’ve said this before, I know, but it bears repeating. Watches like the one shown above are less their own gadget and more an accessory for your smartphone, and that’s why I don’t see why everyone is so excited over yet another smartphone accessory.

I have the feeling that 5 years down the line we’re going to look back at the current iWatch frenzy and wonder why it was so frantically important to so many people.

The $69 Kindle is Out of Stock – Could This be a Sign of a New Model on the Way?

It is important because the growth of the premium smartphone market is slowing. There is a clear limit to the number of people who can justify switching from feature phones and entry level phones to even the cheapest smartphones (and their not-so-cheap data plans) so there is a hint of desperation in the search for the next "big thing" to squeeze money out of Telco customers. So we see cases with embedded eink displays, Beagle-type "readers", and wrist-display accessories pretending to be smartwatches.
When Apple resorts to colored plastic as the highlight of their phone commercials it is clear there isn’t much growth left in premium phones.
The problem is the tech isn’t out there to build a true smartwatch worth buying.
I still say there is no viable market for smartwatches out there; what they can build won’t sell and what might sell they can’t build.

That explains the interest of the tech companies but not why bloggers are so excited. The latest nonsense today is less a news story than an excellent example of mass psychosis:

C’mon! Bloggers are interested in everything. Especially stuff expected to be the "next big thing". Can’t fill a blog just with snark and factual news, can you? 😉

(There’s still reports popping up all over about the Apple iTV that is going to save civilization.)

I think that smartphone accessories have a place in the market. It may not be a "smart" watch as a stand alone device, but I do see the value in not needing to pull out a large 5″+ phone out of my pocket every time it buzzes.

The Pebble watch has a pretty devoted following, but since I haven’t pulled the trigger on it yet, I can’t comment on it from first hand experience.

The challenge for most of these designs is simply that. The designs are all very tech-oriented at this moment and don’t have the elegant watch appeal. This means that these devices will only attract tech-savvy consumers who don’t mind having a Dick Tracy like device on their wrists.

That problem goes away if you don’t stick a 5in tablet in your pocket. 😀

[…] The smartwatch market is quickly being dominated by gadgets with LCD screens (and the occasional Mirasol screen) but E-ink still has its place on smartwatches like the Pebble or the Sonostar. […]

[…] to new ereaders being launched as well as to efforts to enter new markets, including shelf labels, smartwatches, Android tablets, smartphone cases, and […]

[…] Smartwatches have been around for a few years, but the recently released Pebble Time has color eink. A new way to read picture books, […]

[…] Smartwatches have been around for a few years, but the recently released Pebble Time has color eink. A new way to read picture books, […]