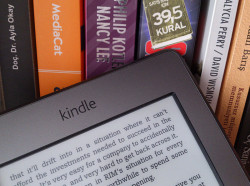 There’s an interesting sound bite from an article that everyone is repeating today, and it is nonsense. The original source is an anecdote used to start a day old article on the Econ0mist website, and it truly is a sound bite:

TO SEE how profoundly the book business is changing, watch the shelves. Next month IKEA will introduce a new, deeper version of its ubiquitous “BILLY” bookcase. The flat-pack furniture giant is already promoting glass doors for its bookshelves. The firm reckons customers will increasingly use them for ornaments, tchotchkes and the odd coffee-table tome—anything, that is, except books that are actually read.

Lots of people, including The Daily Mail, Time, Gizmodo, LATimes, TechCrunch, TeleRead, NeatoRama, Acualitte, and eBouquin, are repeating the story because it is a great sound bite.

Unfortunately, no one took a moment to stop and think it through. The story is anecdotal and it is nonsense.

The problem with this is rather simple: one detail is out of context and the other is probably wrong. Ikea have always had doors for their bookshelves, including glass. They have the doors, yes, but to derive some meaning from the claim that they are already promoting doors is disingenuous; Ikea have never made any effort to sell me anything, much less doors for the bookshelves.

Also, I’m fairly sure that Ikea will not be releasing a new Billy model. It’s my understanding that they introduce new models with each new catalog. They already sent out a catalog for this year; it came out in June. That would suggest that they will not release a new model until next year.

BTW, the Billy line might be getting a new deeper model (though I cannot find any evidence), but it will simply replace/compete with one of Ikea’s existing deep bookshelves.  They already have a couple, including some shelving units that are so deep they are closer to being cabinets.

Update: It turns out that I am half right. Scroll down and you will see a pingback from a Swedish (?) blog. The blogger was told by Ikea that they would soon have a deeper Billy bookcase. The new Billy is one that Ikea already sell; it’s just going to get a different brand name.

I hate stories like this. It’s one of those stories that sounds so good that few bother to double check the details (sometimes I fall for them too). What’s worse is that this little anecdote is overshadowing the rest of a highly detailed, well written Econ0mist article.

Pottermore to Open in April (eBookstore, too)

Review: The Onyx Boox Firefly Shows that There’s More to an eReader Than Screen Tech and a Frontlight

I would have expected them to come out with an eBook reader "shelf." Basically a deep picture frame! Ooh, off to patent that shit right now.

Hey, I like that idea! A place to store my ereader in a kind of bookshelf…

[…] to release a new deeper bookcase and were also now pushing doors for their bookcases. (I covered it here.) TO SEE how profoundly the book business is changing, watch the shelves. Next month IKEA will […]