Europe is rapidly replacing the Far East as the source of the most interesting ereader news and the ImcoV6L is no exception. 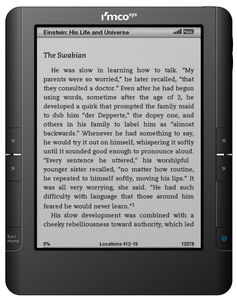 This ereader might look rather ordinary but it is running Android on 1GHz Rockchip CPU. It has 256MB RAM, 4GB of Flash storage, and a microSD card slot. It’s built around a Pearl HD E-ink screen with a resolution of 1024×758. It also offers a capacitive touchscreen, frontlight, speakers, a headphone jack, and Wifi.

According to the press release, this ereader will include support for DRMed ebooks and audiobooks (via the eLibrary WMA App). It will also let users install their own apps, though I am not sure that will be worth much. This ereader has a CPU comparable to a cheap tablet and a limited amount of RAM, so I am not convinced that anyone will really be that interested in installing apps.

The imcoV6L is expected to be available soon, and it will be sold in Germany at eBook.de with a retail of 99 euros.

That is the same price as the Tolino Shine, the 6″ ereader launched earlier this year in Germany. Both devices have about the same hardware specs and can similar support for DRMed Epub ebooks. They can even buy ebooks from all the same ebookstores.

No One Wants to Buy the Nook Touch, So B&N Cuts the Price to $79

Is anyone surprised by the drop in magazine app sales?

When did they become so cheap!?
I know it’s usual US price, but it was like "same price just in euros" as the rule.

I think this ereader (and the Tolino Shine) has a subsidized price. Similar hardware from Onyx costs a heck of a lot more in Russia – more so than increased taxes might require.

I wonder if those e-ink tablets are going to become actual products someday :(…

I’m holding out hope that Barnes & Noble will drop some HD Android E Ink for the U.S. this month, but from a business standpoint it probably would not be wise (then again, what CAN they do to stay relevant at this point?). Amazon’s customers might be mostly happy, but the Kindle line depresses innovation in the U.S. ereader market something fierce.

I ordered now the imcoV6L Ebook-Reader from

[…] trivia. ImcoSys, a Swiss company which first came to our attention in late 2013 with the novel imcoV6L Android ereader, has expanded its […]