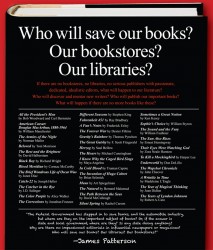 James Patterson is a well-known and well-respected author, but lately that hasn’t been enough for him. It looks like he recently decided to also take on the role of the publishing industry’s curmudgeon emeritus, a job that Scott Turow has more than adequately filled of late.

Last weekend Patterson bought full page ads (at right) in major newspapers which called for the government to take steps to rescue books, the publishing industry, bookstores, and libraries from the scourge of technological progress.

Yeah, it doesn’t make any sense to me either but Patterson has been getting press attention. Earlier this week he gave an interview for Salon.com in which he laid out his complaints:

Tell me about the decision to place the ad.

I do a lot of things to try to raise level of awareness of what’s going on in country right now. This is an unusual and different time for books, the most unusual in the history of this country. E-books are fine and dandy, but it’s all happening so quickly, and I don’t think anyone thought through the consequences of having many fewer bookstores, of libraries being shut down or limited, of publishers going out of business — possibly in the future, many publishers going out of business.

If you are thinking that he sounds like an old man screaming "get off my lawn you damn kids", you’re not alone. But before you write me off as simply a jerk let me explain exactly why Patterson comes across that way.

He laments the death of bookstores, libraries, and publishers when in fact the first has been withering for the past 30 years, the second is dying an unrelated death, and the third isn’t dying out so much as it is being replaced.

Bookstores aren’t suddenly going out of business as a result of increased ebook sales; they’ve been under attack by the major bookstore chains and Walmart for the past 30 years. It was big box retailers and their deep discounts that harmed bookstores the most, and while the move to online book sales and then ebooks exacerbated the effect the root of the situation started in the mid 1980s.

I’ll leave that question to my readers.

Libraries are struggling to stay open, yes, but it’s disingenuous to mention them in the same breath as publishing and bookstores and it’s foolish to ask the government to rescue them. The biggest threat to libraries is a lack of funding, and given that tax revenues are down in most states it’s a little unrealistic to demand that libraries get more funding.

But never mind bookstores and libraries; it’s when Patterson calls for the rescue of publishing that I feel he has truly missed the point. Patterson is lamenting what he sees as the demise of the publishing industry when it’s really not dying at all. First, as a reader has pointed out, much of the industry is turning a profit. What’s more, the AAP reported that the industry as a whole saw an increase in revenue in 2012. Rather than a dying industry what we have here is one that is growing and changing into something new, and at worst it is being replaced by a new industry that is going to fill many of the same roles.

I get the sense that Patterson worships publishing as the guardians of culture, and that he thinks that the great and classic books of yesteryear would not exist without the publishing industry. Given that this is the same industry that publishes celebrity bios, I have to wonder about his selective vision.

But in spite of everything legacy publishing has created some lasting works. Can the same be said about the new publishing industry?

It’s too early to tell, really, but I don’t see how that is relevant. The role of a publisher is to be a business and make a profit, not to create a lasting work of literature. To pretend otherwise is to simply ignore reality.

All in all, I don’t see Patterson’s full page ad as a plea to save books so much as it’s an admission that he doesn’t understand the culture that surrounds him. It has changed too much from the one he grew up in, and he wants the govt to change it back.

OMG! He’s not just screaming "You kids get off my lawn," he’s doing it when there’s no one in his yard at all. He sounds totally out of touch. Does he really, truly expect the government to step in to hold back technological progress? Yikes! It’s not like they don’t have enough to do, what with North Korea working on nuclear weapons, the Middle East always a tinderbox, and a boatload of folks still out of work, but hey, let’s chuck that and stop people from selling Kindles and ebooks. Librarians have actually been very ebook-friendly, because they know libraries survive best by giving people the services they want and need. You are dead right about the lack of funding threat for libraries. I live in an affluent county, but when things got tight for county government, the thing they cut most was the library budget.

I feel that it’s hard to tell exactly what Mr. Patterson is angry about because of the vagueness of his article. However, libraries are certainly under fire by the Big Six publisher’s eBook model- the terms of purchase are far worse than they are for print books. If libraries are going to play a part in the future of books, I think legislation will surely play a role.

Oh, cut the man some slack. He’s single-handedly employing a battalion of ghostwriters and he’s just afraid he might have to write something himself.

Moriah, I suspect you are right about the ghost writing! I went and read parts of the Salon article and I was stunned at his poor command of the english language. I have never read a James Patterson book but I find it impossible to believe that anyone who speaks that poorly can write at all. The questions were well written, the responses were nearly unintelligible. I could only imagine when he replied he was either abstracted, senile, drunk, or he was simply not the author of all the books to which his authorship is attributed.

It’s a known fact. Just do a google search or read this….

Converting old books to ebooks is probably the only way lots of them will be saved. You wont be getting reprints for most stuff.

Patterson’s problem is that some people are buying old backlist books rather than buying his new books. (not enough to put a dent in his $94million a year, though)

He believes this strongly enough to spend his own money on the ads. (Unlike Turow, who uses Guild Dues and bPH contributions.) So he obviously feels personally threatened by something.

Looking at the ongoing gyrations at the "major publishing houses" whose survival concerns him, I suspect that the ongoing reduction in advances may be what is spooking him.
It may be that the advance on his latest title came in a bit light and that set him off.

Over the last couple of years I’ve treated Patterson, Cussler, etc as the new publishers. I don’t know if they provide as much input as they say or if they have 'people' who deal with that side of the money.

It’s sad because I’m really getting a zone where the mainstream authors are just not any fun anymore, when they do stuff like this it just makes me boycott them.

At the end of the day it’s just a book and it’s totally optional in my life. That said, I do spend a fair chunk of $$ on books and removing anything Patterson (or Cussler personally) will let me try some other, not as popular authors.

Libraries are the one area where I think he has a point – in the UK, at least, libraries are a local government responsibility and should be discharged as such. But I think ebooks can only *help* there, if the pricing models are right, because distribution is much easier and cheaper. (I just found out today that I can set my books to be free-for-libraries via Smashwords – I definitely approve of that!)

The odd thing about this is that the Big 6 are not all in serious financial trouble. Quite a few of them are profitable. Why in the world should the tax dollars of Americans be used to bail out an industry *that doesn’t even need to be bailed out*?

That’s a good point. In all honesty I’m not sure even he knows what he wants the govt to do to rescue book culture.

The guv-mint pays the BPHs so the BPHs can keep on publishing as many pbooks as they ever did (and paying the same advances) even if nobody wants to but them. And even if they get pulped, like the 50% or so percent getting pulped in recent times.
He wants change to be stopped…at least while he’s still alive, I assume.

Hmm, I just remembered: a lot of old-school traditional contracts from the 90’s have very low ebook royalties (low single digits). With MMPB sales down and backlist sales moving heavily to ebook he may be taking a big haircut on his backlist and thinks the guv-mint can just print money to make up the difference for him.