New Kindle to Have Rechargeable Case, New Basic Kindle "Woody" On the Way 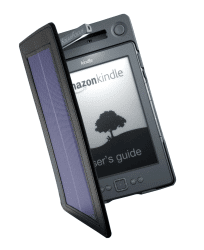 Jeff Bezos has promised that we would hear more about the new Kindle next week, but thanks to a new leak we do not have to wait.

The WSJ confirmed my report from yesterday that the new Kindle had a battery-powered case, and added that we might not see it any time soon:

Also under development is a separate Kindle case with a battery that can be charged using solar power. It is unlikely this case will be released in the immediate future, another person familiar with the matter said.

The new Kindle and case are code-named "Whiskey" and "Soda," respectively, and the solar-powered case is known internally as "Sunkiss" among engineers at Lab126, Amazon’s Silicon Valley hardware development unit, one of the people said. The division is responsible for other Amazon devices including its Echo virtual assistant, Fire tablets and Fire TV set-top box.

So it’s a solar-powered case? Interesting, but not ground-breaking. There were third-party solar-powered battery cases for the Kindle Touch and the Kindle (no-touch). They were released in early 2012, and the quietly vanished as the stock was sold off. (You can see one of the cases in the lead photo.)

I have one of those cases, and I never thought it was worth the extra mass. It just wasn’t useful enough to justify the nuisance, so I rarely used it.

It’s not clear why Amazon is reviving that old idea, but one does hope that it points to a Kindle which needs the extra battery life (Liquavista …). But that’s for the future; what matters now is the Kindle to be announced next week.

While I don’t have any details about the case codenamed "Soda", I can independently confirm that the codename "Whiskey", or rather "Whisky", has been found in the recent Kindle Firmware update.

Edit 1: And now we know the name is the Kindle Oasis.

Edit 2: Another leak confirms the battery-case, and that the Oasis has page turn buttons.

Edit 3: And Amazon has put the cherry on top with a leak on Amazon.ca.

A hacker has taken apart the update and found references to a new basic Kindle codenamed "Woody" as well as the Kindle "Whisky". He said that the new Kindle we’re going to hear about next week lacks the haptic feedback found on the Voyage (yay!) but may have page turn buttons (double yay!) and accelerometers.

He called it a "hybrid between a PW and a Voyage", one which could run on the Paperwhite’s firmware, and added that both the new  models "would run on a new storage solution at the HW level". Also, the "Whisky" model and the new "Woody" Kindle are going to use a new mainboard codenamed "Duet".

So there you have it, folks; we have not one but two Kindles in the pipeline.

And you read it here first.

Hopefully you will get good battery life without a protective case. Thinner and lighter sounds nice IF you don’t need a case. Improved power usage has been rumored for some time.
Hopefully more improvements than battery will emerge…!

If it runs PW firmware it probably won’t be Liquavista.
Unless Amazon introduces *three* new readers and Whisky is the next PW.

An improvement I would like to see, but probably won’t, is an e-reader with an easily replaceable battery.

I’m amazed how heavy the Paperwhite appears to be with the case on it.

I’m so bored of shades of gray readers. Where is the color already?

On the Fire tablet.

I like my Fire tablet, and find it a good vehicle for some books. But for most reading I find myself turning to the Voyage.

Right now I am reading on a 10″ RCA tablet. I love the huge screen, and I can keep myself from getting distracted by not installing apps.

it’s called the Fire..or go nuts and get an iPad mini with the kindle app. 🙂

Got the fire, got the iPad mini, got a PW lol. I’M fine with reading on PW, but browsing the store in b&w is not fun. And come on its been 8 years and everyone promising low energy color has failed it seems so far.

So invent one and make your pile.

The desirability or otherwise of a case with photovoltaic (solar) charging has to depend in part on the efficiency of the cells. High efficiency = fast charging.

And if they are both 6 inch readers that is a complete deal breaker for me no matter what fantastic things they could add. I will stick with the iPad mini/ using night shift and my Kindle DX until it dies.

I don’t think it will be a lighted case unlike what the picture above suggests. I think they will reduce the battery in the new kindle to reduce weight and having the case will compensate (so that you don’t have to plug it in as often).

That would make sense, but I still hope that’s not it.

IMO, the Kindle doesn’t need to be thinner. It’s fine the way it is.

What is with this obsession with making mobile devices as thin as possible? It sacrifices function in favor of mere appearance. Nothing useful is gained.

Sort of agree. I don’t mind thinner or lighter…but at the cost of what?
My wallet
Battery life
Screen quality
Durability

I am hoping that tech has improved enough to make advancements and additional features without sacrificing current features and quality.

If the device were larger, thinner and lighter may become a real benefit. An 8 ounce 8″ or 9.7″ device would get my attention. Probably my dollars.

Personally, for non-PDF’s, I just don’t get the problem with a 6 inch reader. The few extra lines don’t mean a thing to me on a bigger device and it’s like the difference between paperbacks and hard covers; more ungainly and difficult to hold. The smaller size is well worth turning pages more often.

[…] to the fun, a MobileRead poster, Nate and others are reporting the possible existence of a new basic Kindle called Woody. Perhaps with […]

What day of "next week' do you think this announcement will be made? In past announcements, has Amazon had a favorite day of the week? If it isn’t Monday it is going to be a long week!

[…] is getting all the attention today, but it's not the only Amazon hardware leak. There's also the upcoming basic Kindle "Woody", and now new benchmarks have leaked which point to a new Fire […]

[…] Kindle news, it’s worth noting that there other new devices in the pipeline. The Digital Reader pointed out a couple of weeks ago that a hacker noticed some clues embedded in the latest firmware pointing to a new basic Kindle […]

[…] may have slipped under your radar thanks to the news about the new Kindles, but earlier this week Amazon released a new version of its budget Fire tablet. The new Fire […]

[…] is reportedly planning to release a solar-powered case for the Kindle Oasis, but thanks to one industrious hacker it's going to be the second premium […]

[…] next basic Kindle model, codenamed "Woody", should have this feature, […]

Any further rumblings about woody? I truly wish they would update the DX.

[…] this year a Kindle firmware update dropped hints about a new basic Kindle code named Woody, and today it finally […]

[…] week's news about the new Kindles has sparked discussions both here, on MobileRead Forums, and elsewhere about readers' current […]