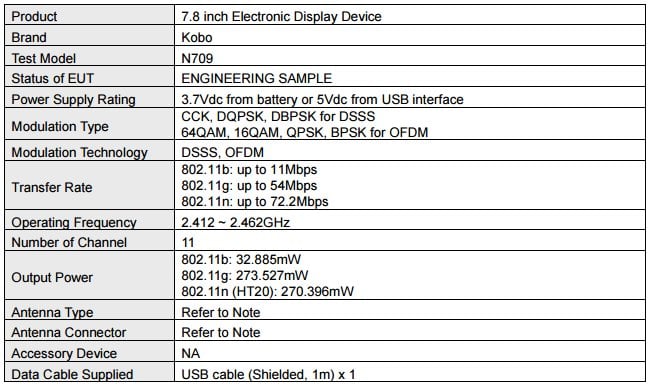 Kobo has new FCC filings this week which are bound to set the ebook community buzzing.

Most of the useful  details are concealed, but according to one set of paperwork, the Kobo Aura One (model bn709) was made by Netronix. It’s a device with a 7.8″ screen, Wifi, and a 1.2 Ah battery. There’s a microUSB port, but no audio or card slot mentioned.

If that screen is real then the Aura One will be the largest of Kobo’s ereaders, with a screen close to my preferred 8″.

But it might not be completely correct, and here’s where things get interesting.

According to the paperwork with the other Kobo FCC filing, the Aura One (model number bn236) is a six inch device. That listing doesn’t tell us much either, but the paperwork does show that this model has a 1.2Ah battery, Wifi, and a microUSB port.

Yes, we have two listings for two different-sized devices which have the same name.Does anyone want to guess which one is the correct listing, or offer a good explanation?

I admit to being baffled, and also deeply interested. Kobo currently sells three ereaders, two with a six inch screen and one with a 6.8″ screen, and now we could get one with a 7.8″ screen.

If the larger Aura One model is released then it will supplant the Aura H2O as Kobo’s premium ereader model, and it will make the Oasis look tiny and overpriced.

But will it be released?

Well spotted. Thanks. Great for manga and pdf readers.

Obviously there are two ones. And after that they’ll go straight to five.

You state the 7.8″ device is made by Netronix. Are all Netronix devices Android devices? Or can it be any OS?

Netronix can do Android on E-ink, yes. Kobo has never taken them up on the idea, however.

Kobo can’t do an android-based ereader.
B&N and Sony can both attest which is the first app that’ll get installed.

My question was are all netronix devices android? Not can they be.

Kobo’s ereaders run Linux. The last 4 or 5 were made by Netronix.

Edit: Uh, no, all Kobo ereaders from the beginning have been made by Netronix. (I don’t know why I got that wrong.)

Thanks for the clarification.

Putting more thought into it I’m concerned about the weight. The Kobo Aura H2O is 233 g. It’s official sleepcover is about the same, 200 g. That puts the whole package at 433 g. For me that’s just borderline readable one handed. If they keep everything the same but scaled up, an 8 inch reader will be too hard to hold.

Hopefully this will push Amazon into coming out with a larger screened Kindle.

A 7.8″ will appeal to readers using the pdf format. Amazon doesn’t control that format, so they won’t produce an e-reader that encourages it.

The downside of this is that Amazon’s policy reduces choice and innovation in the market-place. Amazon has demonstrated no interest in innovating the technology. At least Apple pushed the tech envelope. Amazon has gone backwards.

FCC search results expire pretty quickly, so a better resource for linking would be FCCID.io:

Looks like Netronix is finally offering the 6.8″ form factor to vendors besides Kobo as well.

Whoops. I didn’t realize they expired.

Very interesting Nate, glad to know Kobo are still working on new products.
What do you think of that battery capacity, doesn’t 1.2Ah sound small, especially if it was going to be a 7.8"reader?
I am not an expert but I think that my current Aura has a larger capacity, or am I mis-understanding things? Thanks.

True. I was a bit puzzled as my current Kobo Aura has a 1500mAh capacity so larger than the one for this new model.
However my previous reader’s battery stood at 1000mAh (PRS-T1) and that was certainly enough.

I think it’s for weight consideration. Reduced battery life is necessary so that it’s not too heavy.

I think it’s highly unlikely that an FCC filing would have such an egregious typo.

Actually 7.8 is a very special size, not odd at all. It’s the size of the mass market paperback.

Now the difference is the aspect ratio. It would be interesting to see if they go closer to the 1.6:1 aspect ratio of mmpbs instead of the current 4:3 in order for to still fit in a pocket.

And if that is the case the six inch might share the redesigned aspect ratio as well.

Hopefully Kobo puts out a good device and pushes Amazon off the fence.

A couple updates for those following this story:

I found another name for the smaller device. It was referred to as the "Kobo Aura Edition 2" in one if the filings.

Also, I mised this but someone at MobileRead pointed out that both sets of paperwork include a screenshot from a Kobo ereader. That is strong evidence that we’re loking at two E-ink ereaders.

A 7.8″ with Koreader will make a decent pdf reader. With Amazon’s dominance of the market, I wonder how Kobo is making enough money to innovate. The global as opposed to the USA/UK market?

If it truly is an oddball 7.8in ereader, the "innovation" isn’t from Kobo but from eInk and Netronix.

People forget eink is real the tech bottleneck in eink readers, not the hardware vendors. Their inability to deliver high volumes of screens at viable prices is, other than at 6in, is the main reason for the so-called "lack of innovation". After all, if they could produce other, newer reader-capable screens, even in low volume, we’d see them in niche products regularly. Instead, we have the big panels paid for by Sony at prices the market doesn’t like, Pocketbook promises, and occasional 6.8″ and 8″ & 10″ old tech panels for the likes of Onyx.

Amazon still needs screens by the million so it does them no good to introduce a reader only a handful of their customer base can buy. Kobo is much smaller so a batch of 100-200k can last them a year. And it sounds as if that is about all eink can make of the 6.8 inchers.

Eink tech is looking a lot like a backwater. Maybe even a dead end in the longer term. It may be that like SED displays the economics just can’t keep up with the market’s need.

Nonsense. If Amazon wanted to market a larger e-reader, then manufacturers would happily and profitably provide the devices.

Nonsense?
Throwing money at a technology is no guarantee it can be made to work.
If Amazon could do that, wouldn’t they do it with Liqusvista, which they own lock stock and barrel. For that matter, if throwing money were all that was needed, Samsung wouldn’t have flipped it to them.
Eink tech has physical limits in both operation and manufacture. And no amount of investment is going to alter those limits at any price that makes economic sense. Not for Amazon, not for Apple, not for anybody.
Eink is about as mature as it’s going to get anytime soon.

Your reply is irrelevant. Manufacturing 7.8 inch Carta screens is not innovative (in fact they already have the technology to produce anything between 6 and 13.3 inches). Coming up with the new idea that there is a market for 7.8 inch readers is by definition innovative.

I agree. It’s having the guts to bring new product formats to market that is innovative. The tech is already there, but Amazon is refusing to implement anything other than 6″. Lets hope Kobo can continue to squeeze enough out of its margin of the market to continue innovating the market.

[…] & Noble. The latter files its own FCC paperwork, and the former already has a couple ereaders in the pipeline. Also, Kobo ereaders usually carry a model number which references Kobo's name and follow a […]

[…] little over a month ago Kobo's next two ereaders showed up on the FCC website, and now it appears we'll be seeing the hardware itself in a couple […]