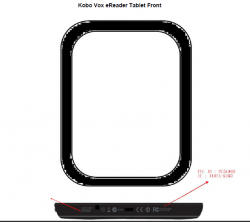 Wistron, one of Kobo’s hardware partners, sent a new gadget through the FCC today. It’s called the Kobo Vox and that’s all I know.

Now, I would normally speculate about the gadget but I’m not sure what it is. The screen shape is rather odd for a tablet or ebook reader; the (screen) corners are far too rounded for most screens that I know of. No large screen tablet has corners that rounded. You can sometimes see that on small devices but not often.

Note that I’m talking about the inside corners, not the shell.

Wistron is calling it an "eReader Tablet", and it was test for Wifi(n). We also know that it has a microSD card slot and the model number is K080.

Update: I’ve gotten a hint that Kobo will release this tablet. Whoops. Also, this is now a 7″ tablet.

Shape aside, wouldn’t it make sense for Kobo to get into the android tablet business?
NookColor by itself outsells pretty much any single eink reader not named Kindle or Nook and Pandigital is easily a top 5 reader vendor on the strength of its horde of android tablets marketed to readers.
If anything, given its focus on less-developed international ebook markets, where multifunction devices have deeper appeal, it makes plenty of sense for Kobo to get a flagship color device to promote their Android app.

Nook Touch-like shape. Wouldn’t count on the frame also being the fascia or the screen, though. Might account for that Modification Letter.

[…] may have a tablet up its sleeve too. ***** Pete Cashmore of Mashable says that a new Facebook look will be launched soon and it may […]

[…] you  recall that Kobo device that I showed you on Friday – the one with the funky corners? Today I learned that it probably doesn’t look like […]

[…] already gotten a hint a few days back that Kobo would be releasing this tablet, and that the FCC paperwork was just a convenience, not a sign that they had passed on the tablet. click to […]