Kobo’s Next eReader Clears the FCC 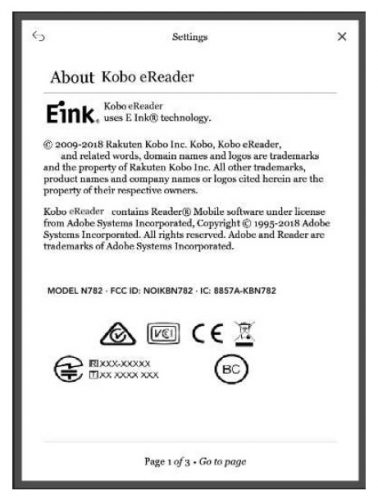 Kobo’s next ebook reader showed up on the FCC website today, and the listing raises far more questions than it answers.

With previous Kobo models, we have usually been able to at least glean the device’s name, but the new device is identified only by its model number, N782. Kobo not only took steps to obscure interesting specs such as the dimensions, screen size, etc, they also decided that this time they would hide even the model name.

Since Kobo won’t tell us the name, I’ll make one up.

I’m going to call this the Kobo Aura Two.

The Aura Two was tested for Wifi, and they used a microSD card during the test, which means the Aura Two could have an external card slot. It was not tested for audio or Bluetooth.

A careful reading of the test reports doesn’t reveal any other details, leaving us to speculate about the device’s specs, functions, and launch date.

For example, there is a 50-50 chance that the Aura Two will launch with the Kobo-Walmart partnership. That was scheduled to happen tomorrow, which means we could find out more about the Aura Two in as little as 24 hours.

On the other hand, we might have to wait a few weeks or months for the official launch.

What would you like to see in Kobo’s next ereader?

While the others don’t, I think this one does.

That would be a great inside joke, yes.

I have so much Amazon content that it would be hard to switch. I have not mastered Calibre conversion of format.
I do want Kobo to challenge Amazon-good for all readers. I don’t expect earth shaking changes in this model…Maybe improved lighting or page turn buttons.

My Kobo device can read Kindle .mobi files. Just copy-paste them into the device folder. I tried it with my Kobo Touch just now, before writing this comment. It’ll probably work for other models too.

Note that this is .mobi files, which seem to be the Kindle files that most of my friends use. It doesn’t work with .azw* files (AZW, or Amazon’s DRM format)—so you should probably check which format you have to see if it’ll work for you.

I’d like to for the night light to be easily configurable. No spelunking 6 menus down. Bluetooth for those who want to listen to audio books. Colour support so I can read comics as God intended.
Calibre support. Easy to install your own fonts and use them for reading. Some waterproofing and dust resistant for all models.
I also want to easily install kobo’s dictionaries of my choice.and microsd card slots. My ebook reader my choice to stuff it with gigas of content.

"night light to be easily configurable. No spelunking 6 menus down."
What!? Just swipe up or down to change the light setting. It is actually easier than any other ereader. You don’t have to go into any menus.

"Colour support so I can read comics as God intended."
Not in the books.

"Easy to install your own fonts and use them for reading."
You can already do that.

"Some waterproofing and dust resistant for all models."
Again already true.

It sounds like you’ve never used a Kobo before. Most of the things that you want, Kobo ereaders already have. You might be happy if you buy one now.

Some books have colour maps and/or images. As for comics I don’t want to download an app specifically for comics.
Not all models have micro SD support. I checked kobo’s site out of curiosity and for me it’s a deal breaker. One reason why I don’t buy a kindle or an iPad.

Kobo/Rakuten is also developing Tolino, and followers of Shine2HD/Vision4HD are still missing – equivalent to the Clara HD

All I’m interested in is something like the Aura One with an absolute minimum of 32Gb storage, preferably more, and a better, faster processor to handle the increased library size that the extra storage will allow. Built in speakers for audiobooks would also be nice.

All I really want is a new Mini at 300 dpi. I’m just about certain we’re not going to get that. Suspect this is another 7.8″ device; basically just a refresh of the Aura ONE… *yawn*

I was thinking of ordering the Limited Edition Aura ONE, but now I suppose I should wait…

I desire…
1.to be able invert text, (Black background, white text) but that’s software.
2. To be able to sync between kobo phone app and kobo ereader books that I already own, that I didn’t buy from Kobo. (So many theological books are missing from kobo catalog)

The Aura ONE was so painfully slow, that Kobo should have made it a priority to improve a successor device on this. I also want a new Mini, premium edition.

But right now Eink doesn’t have show a display module that would support that.

But here’s what I’ve been thinking: If they’d minimize the bezels, they could get a 6″ display in a device about the size of the original Mini. I’d buy several of those in a heartbeat.

When I buy shirts these days, they MUST have a pocket that fits the Mini. My Mini goes everywhere that I go.