like Lab126 is about to open a new office in Boston, Mass.

The Boston Globe’s tech blog has discovered that Amazon is holding a private recruiting event at the end of the month. It’s s being held in a restaurant only a few blocks from the MIT campus. The invite for the first event drops a few revealing hints about Amazon’s future plans (or so I choose to believe): 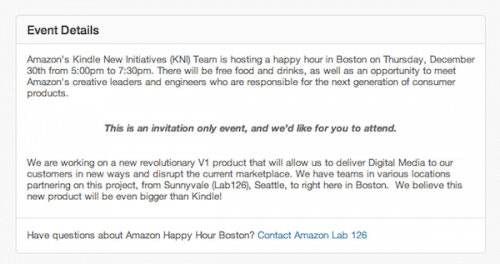 If you cannot see the image, the second paragraph says that Amazon is "working on a revolutionary V1 product that will allow us to deliver Digital Media to our customers in new ways and disrupt the current marketplace." Curiously enough, that quoted section is missing from the invite for the second event.

Update: It’s been pointed out to me on Twitter that 30 December 2013 did not fall on a Thursday.  30 January 2014 does, which means that the screenshot above is the early flawed description for the event coming up in a couple weeks.

Would anyone care to guess what that revolutionary product might be?

Rumors have circulated in the past that Amazon is working on a set-top box, a smartphone, and even more smartphones, Assuming those rumors are true then this new product would have to be something different. And I don’t think a new ebook reader or tablet would qualify as revolutionary, so those are out as well (plus they would be developed by existing teams).

So what do you think the new device is going to be?

I’m thinking that it could be some type of wearable. I don’t think this product niche is ever going to amount to much, but wearables (smartwatches, Google Glass, and the like) are a hot topic right now. Amazon might want to put a team together just to explore the possibilities.

The market for wearables is awfully small at the moment and populated by marginally functional products, but that doesn’t mean that it won’t grow. In fact, the ebook reader market in 2007 looked a lot like the wearables market does today. Perhaps Amazon might be able to upset the wearables market with a new product just like they did with the Kindle?

P.S. Amazon might also be recruiting developers for a software product; an app can be just as revolutionary as a new gadget. Would anyone care to guess what that might be? 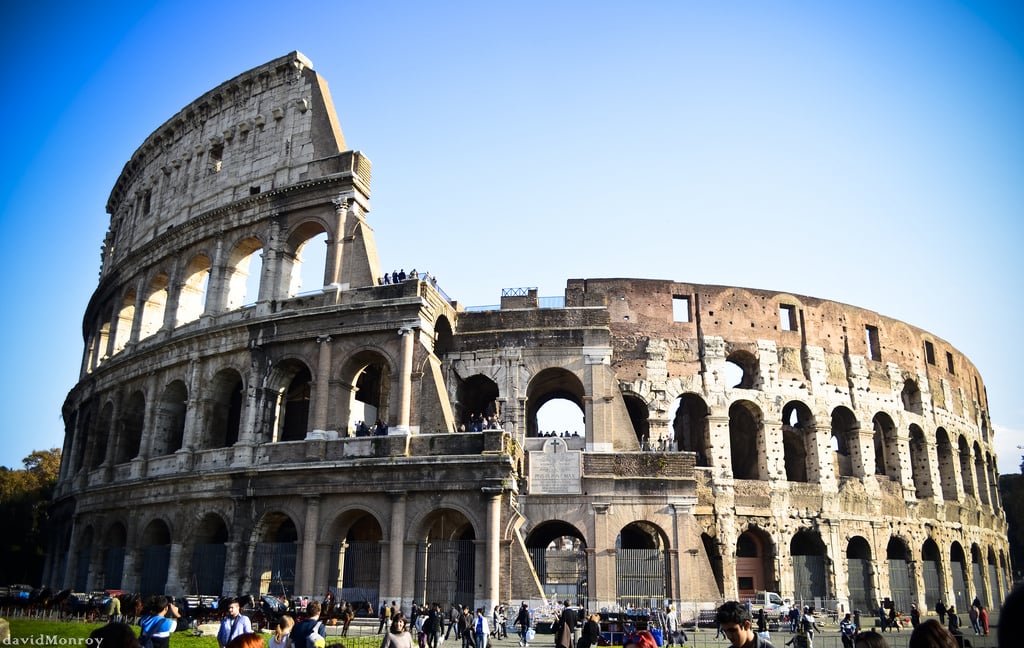 4.5 Million Italians Have Read an eBook in the Past Three Months

The single most disruptive product on the horizon is TV over ip but as long as the networks keep pandering to the cablecos (much as the BPHs and B&M, pre-Kindle) it will remain on the horizon. Of course, if the Aereo model holds up in the SCOTUS…

Maybe it’s the Kindle phone no one is talking about any more.

With the right people, you could hack together a Glass-wearable clone using existing hardware that would give you most of the capabilities of a Kindle Fire without the bulk of a tablet(i.e. movies/music/ebooks/shopping).
If Amazon doesn’t jump into this space someone will…

If I was a gambling man (and I am!) I’d take the odds on some type of set-top box that could handle games and TV, or even a version of Google’s Chrome TV plug in thingamabob that can deliver streaming movies and television – as I don’t think wearable is quite there yet, despite the insane potential.

I can’t conceive of anything, at this stage, that could disrupt books or music in the ways hinted at the invite. That doesn’t mean it’s not possible, but I think something aimed at TV/movies is the best bet.

Alternatively, they could mean it literally and it’s actually gonna be a 12″ Kindle 🙂

Uh-huh.
TV over ip.
Netflix is looking to move 4k video over ip and the potential is there for first run day-and-date 4k video movie releases on an STB.
2014 smart TVs and XBOX ONE and PS4 can all do it already.
http://www.cbsnews.com/news/netflix-app-to-stream-ultra-hd-4k-video-on-new-tvs/

Maybe yes, maybe no.
The ruling only applies to the District of Columbia.
And what was litigated wasn’t net neutrality itself, but the FCC’s power to mandate it, when Congress considered such a mandate and chose not to.
The best next step is for a broad lobbying effort to persuade Congress instead of fighting to support over-reaching bureaucrats.

I figure that means that the dev team is already established elsewhere, so this must be something new.

But I do agree that Amazon is almost certainly working on a set top box; it would be an obvious extension of the audio/video/streaming work Amazon put into the Kindle Fire platform.

I’m surprised you haven’t caught the buzz about this earlier. Clearly Amazon is taking the war with its competitors to the next level, by blowing away them away. Literally.

While the V1 is an older technology, I’m sure that an update is in order.