Too Little, Too Late: 13 Japanese Companies Form a Coalition to Bring eBooks into Bookstores

given the world the first commercially available ebook reader, and it may have turned cell phone novels into a cottage industry, but their digital publishing efforts of late would best be described as tepid with new projects merely copying what had been done elsewhere years ago.

News broke last week that some type of consortium consisting of 13 Japanese companies would pilot the sale of ebooks in bookstores. Saying little more than the companies wanted to "counter U.S. online retail giant Amazon, which has held the largest share in Japan’s e-book market since the launch of its Kindle tablets", details in the English language coverage was sketchy at best and didn’t even include a complete list of all 13 of the companies.

The original Japanese coverage doesn’t have much more in the way of details, but it does include a fair amount of criticism, with some describing it as too little and too late.

According to the Huffington Post, Nikkei, MSN Japan, and other sources, a partial list of the 13 companies would include Sony, Rakuten, Kinokuniya, Sanseido, Yurindo, Imai bookstore. Nikkei goes on to add that the ebooks sold in Japanese ebookstores would either be some type of gift card similar to the cards produced by Livrada, Enthrill, and other companies, or it might be some type of downloadable code which would be printed on a customer’s receipt (kinda like the ebook vending machines which first appeared in Japan in 2011). Nikkei also gives the impression that that detail does not appear to be set in stone.

There is no readily available info information on the number of bookstores that are going to participate in the pilot, nor can I tell you when the pilot will start. But I can add that the Huffington Post is describing this pilot as a way to save Japanese bookstores which are reportedly on the decline. 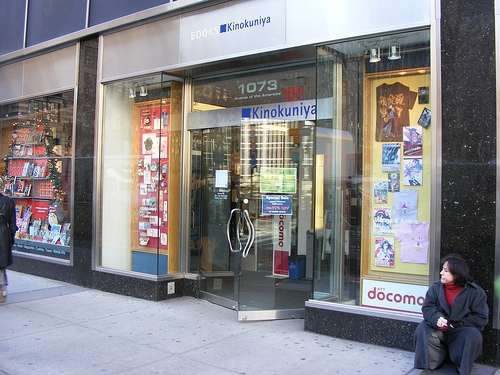 It’s rather difficult to beleive that bookstores are on the decline in Japan given that one of the 13 companies, Kinokuniya, is expanding into the US with 7 locations at this time.  The bookstore pictured above is their location in NYC (I almost included a photo of their Seattle location as well).

This must be a uniquely Japanese phenomenon,. With the resurgence of indie booksellers in the US and the opening of epic 3-story bookstores elsewhere in Asia, bookstores don’t appear to be in ill-health elsewhere.

Most sources are framing this pilot as a response to Amazon, with some calling it Japazon (I couldn’t make that up). It’s not clear whether the consortium used the word first or if it were introduced by the journalists, but if this is a response to Amazon then it is a lackluster response at best.

Amazon launched a local Kindle Store in Japan in October 2012, and in spite of the local ebookstores having 5 or more years to build their market share Amazon has managed to gain the lion’s share of the Japanese ebook market (or so the latest survey suggests). The Kindle was also estimated to account for one in 3 ebook readers sold in Japan in the 12 months ending March 2013, or about 180,000 out of 470,000 units sold.

What with Amazon’s overnight success in Japan, I remain unconvinced that any effort  to sell ebooks in brick and mortar stores will have much effect on the ebook market as a whole. If nothing else, this kind of program has had little noticeable impact in other markets and there is little reason to believe that Japan will be any different.

180k sales in 12 months isn’t much to write home about, especially in a country as affluent and tech-savvy as Japan.

It’s still way too early to declare a winner in that market.

Some interesting facts for you. Based on replies to a survey of the readers of their epub magazine "OnDeck weekly", Impress R&D (Dec 2013) said their Japanese ebook users currently buy books from the following:
55.2% from Amazon
17.5% from iBookstore
13.5 from Kinoppy (ebookstore from Kinokuniya)
11.9% from Rakuten kobo
11% from Sony Reader store
Further down the list was Google play books at 3.5%