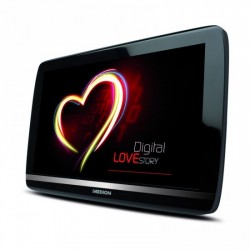 The discount gadget brand Medion have decided to get into the premium tablet business.

The Medion Life Tab is going to be running the latest version of Android when it ships in a few months. It has fairly standard Honeycomb specs – dual core Tegra 2 CPU, 10″ capacitive touchscreen display (1280×800 resolution) , 32GB Flash storage, a pair of cameras (5MP and 2MP), USB and HDMI, Wifi, GPS,  mike/speaker, and optional 3G.

It’s expected to have 10 hours battery life and weigh in at 720 grams. Apps include the Android Market, Ebay, LIFETAB Media Software, and Docs to Go. Retail will be 399 €  in Europe and there’s no word on when it or if it will be released in the US.

And here I thought that 2010 was supposed to be the year of the tablet. Nope. Now it looks like 2010 was the year that the crap got released in order to get it out of the way of the good stuff, like the one above.

[…] has unveiled a couple different devices at IFA today, including a 10″ Honeycomb Android tablet and a 6″ eBook […]

I admit that the specs of most premium android tablets are probably better than the ipad, but these manufacturers are a bit deluded to be releasing them at prices on par with the ipad. They need to bring it down in order to compete favourably.