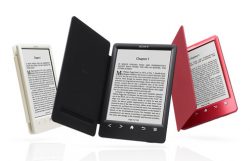 If you’ve been holding off on your next ereader purchase while waiting to see when Sony would release the next Sony Reader in the US market, you can stop waiting.

Sony has confirmed that the PRS-T3 will not be sold in the US. This ereader had launched in Canada, Europe, and the rest of the world earlier this month and has even cleared the FCC, but Sony has chosen not to sell it in the US.

This news was first reported on MobileRead a couple days ago when one disappointed reader shared the response from a Sony CS rep:

Hi – I was just notified that the Sony PRS T3 is not coming to the US anymore. Please let me know if there is anything else I can assist with or if you’d like to consider other E-Reader options.

The change in policy was later confirmed by Sony’s pr dept, which said that rather than sell the ereader Sony plans to instead focus on selling ebooks via apps for iOS and Android:

Sony will not be offering the Reader PRS-T3 in the United States. In response to the region’s market changes, Sony will be focusing instead on mobile and tablet devices, including the Xperia Tablet Z and Xperia Z smartphone. Digital reading and eBooks remain an important priority for Sony. Reader Store will still help book lovers find and read their next story, anytime and anywhere, and customers can continue to expect new and exciting features and discovery tools. Reader Store will continue to support previous Readers as well as other compatible devices via the free Reader apps for PC, Mac, Android and iOS.

In a way, this comes as no surprise.When I visited the Sony booth at BEA 2013 I saw that they were as much interested in the apps on their smartphones and tablets as they were interested in ereaders.

Sony has largely been treading water in the ereader niche for a couple years now. Their last innovative device was the PRS-T1, and that was interesting more for what hackers did with it than what Sony did.

Both last year’s PRS-T2 and this year’s PRS-T3 are largely the same ereader as the T1, only less capable and more locked down. The T1 had sound and was easy to hack; the T2 and T3 don’t have sound and the T2 was harder to hack.

No, Your Kindle Can’t Catch a Virus

I suppose Sony is doing the U.S. a favour. It’ll give people a better opportunity to buy a quality device instead of years old tech bundled in a new box.

Sony got it seriously wrong. The case design is innovative and superior. If they had put a front-light in and kept the price low, they could have done well.

What am I supposed to do for a reader that can auto-organize on import from Calibre now? That was the reason I stuck with Sony (PRS-350). I don’t have the time to sit there and organize my books one-by-one by tapping on the e-reader.

You can still buy the white T2 in Sony online store…

Why can’t any other company unlock the stupid library files so we can use external programs to organize? What purpose does encrypting those things serve? We aren’t editing the books, we just want to edit the stupid collections/booshelves/whatever by some means other than sitting on the device and pecking them into place 1-by-1.