Pew: eReader Ownership Dropped by Almost Half in the Past Year 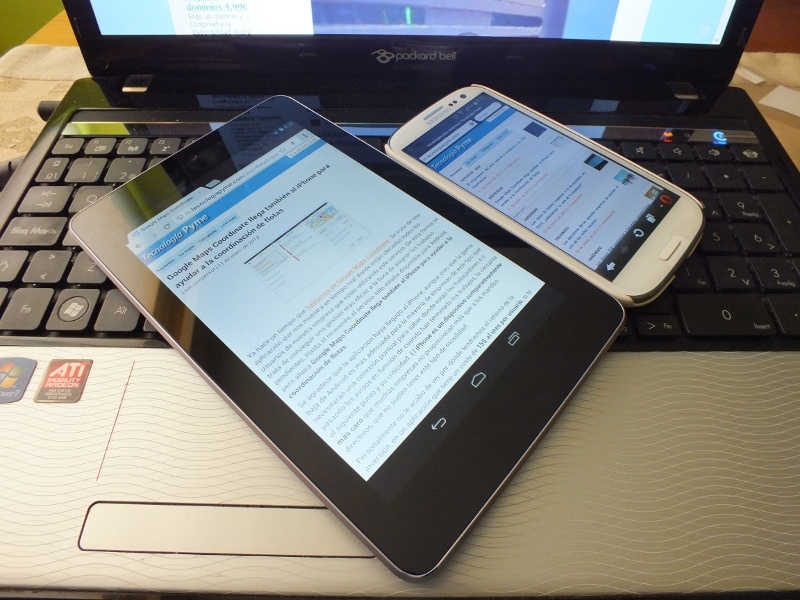 This blogger has been saying since 2013 that smartphones and tablets would drive consumer ebook sales, a trend that the WSJ confirmed earlier this year.

And now we learn that consumers aren’t just shifting their reading habits; they’re leaving ereaders behind. The Pew Research Center has a new report on device ownership in the US out today which tells us that ereader adoption hasn’t just leveled off; it’s cratering.

The survey found only 19% of respondents owned an ereader, down from 32% last year. Game console, PC, and mp3 player ownership also dropped, although not to the same degree. 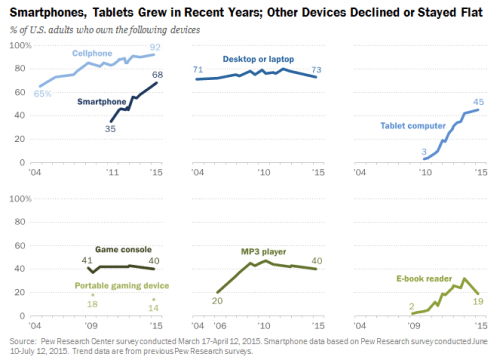 Looking at ereading devices, we can see in the above chart that tablet ownership continues to grow slightly as it catches up to smartphone ownership. With 68% of respondents owning a smartphone, that category continues to outpace the adoption rate of any other mobile device, which makes sense given that smartphones (and to a lesser degree, tablets) have replaced your mp3 player, camera, and gaming device, and for some people serve as their primary source of web access.

This is especially true for younger adults, who are more likely to have a smartphone than a computer: 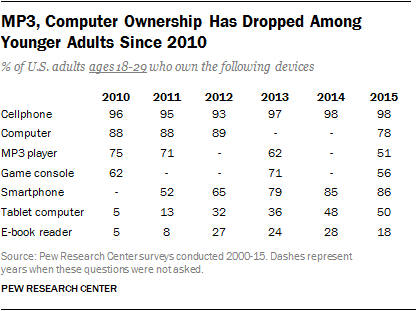 With 86% of this age group owning a smartphone, that category has effectively reach the saturation point and it won’t grow much further. But overall smartphone adoption will continue to grow as this age group grows older.

And from the looks of things, so will tablet adoption. eReaders, on the other hand, are yesterday’s news.

You can find the complete report, including data which breaks down along income, education, and gender lines, on the Pew Research Center website.

I think it’s true. I got my first tablet at the point where I was considering an ereader. The disparate features and lacks of capability of most ereaders hs caused me never to look baack and thus I have owned several tablets yet not one ereader.

This is a surprise, how? If you have a smartphone or a pad, why carry one more device around just to read books? When I had a dumbcell, I needed my PalmPilot for things like schedule, contact lists, etc. and a plaintext program as an eBook reader. These days, I carry one gadget (my phone) for all the things my dumbcell did plus schedules, tasks, etc. etc.

The only caveats I urge are: 1. Back up everything religiously. and 2. Secure the device with a strong password and watch it like a hawk.

I was a little surprised to see such a steep drop. I would have expected that most of those who had an ereader liked using it and would continue to do so.

I question the results of this Pew study. What happened that caused 10% of young adults to stop owning their e-reader in one year?
Also, game consoles going from 71% to 56% in two years seems like a big drop.

I think its partly because eink has stalled. I mean, how many of us thought we’d be in color screens with at least a week or more battery per charge by now? If Amazon dropped a color eink screen tomorrow on a new reader, I’d be all over it. As it is now, its just minor bumps in improvement, and most of those I don’t care enough about to upgrade my 1st gen paper white.

So two out of every five e-reader owners junked theirs in the past year? If so the trash bins ought to overflowing with discarded Kindles, etc., and there should be no market for used ones. But in practice I see used Kindles, at least, trading for a substantial fraction of the price of new ones.

It’s not that young adults throw them away. They buy less.
And to the question: "why carry one more device around just to read books?" Simple: in my case I own a kindle, an iPad mini and an iPhone 5S.
At home I mostly read books in my Kindle (I use Calibre to convert epub->Mobi), read The Morning Coffee in my iPad [and other sites] when having breakfast, and use the iPhone for communications.
And when using public transportation (usually between 2 and 3 hours to and fro) I listen to music with the iPhone (preserving energy) and read with my Kindle.

I’m not surprised about the decline in dedicated ebook devices; reading itself is declining as people younger than me choose other forms of entertainment. What the information doesn’t disclose is how many of those who stopped buying/using dedicated ereaders have continued to read but on a more utilitarian device. I have pretty much stopped reading on a dedicated ereader, but my reading didn’t transfer to some other device (e.g., I never have and never expect to pleasure read on my smartphone or tablet); instead, I went back to print.

These types of surveys are incomplete and it is impossible to draw usable information from them outside the fact being specifically measured.

I agree that the sharp drop is suspicious. I’m one of those people who lives having an eInk reader, event though, yes, it means one more device. I can left-hand read on my Paperwhite, which I can’t on any other device, and that’s the most comfortable way to read on my couch. Plus eInk is actually easier on my eyes, a tough admission since I used to be one of those people who scoffed at "tablet eyestrain." Maybe it’s my age, but I do suffer from it now. Night mode helps, but eInk is better. I hope Amazon will keep making them, at least for a while.

I can believe young folks read on their phones, but at my age, I need bigger fonts and a bigger screen. I still carry my Kindle Voyage in my purse because it’s not that large or heavy and I hate reading books on my phone.

This is just totally opposite of what I see in real life but I think most of the younger adults I know had ereaders before they had smartphones. If you have a smartphone or tablet, why would you think you need an ereader unless you have had some exposure to them?

I was shocked that a paperwhite felt in my hand as heavy as my iPad mini. If you’re not going to read it outside all that much, why would you want an ereader?

Free and Open eBooks Won't Help Those on the Wrong Side of the Digital Divide | The Digital Reader April 3, 2016 um 1:29 pm

[…] the point that this program was launched in a country where only 45% of adults own a tablet, and 68% own a smartphone. With past surveys having shown us that gadget ownership and reliable internet access is […]