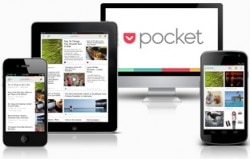 Pocket announced this morning that they now supported 10 million users. The save-for-later service, which at last report had 7.4 million users  in December 2012, took a moment to tell us that their goals hadn’t changed: enable users to save and view the content that is interesting to them on any device, at any time.

Pocket was launched in August 2007 as Read It Later. It was one of the first services to take the established idea of bookmarking content and make it more useful. Rather than just save a link, ReadItLater copied the text of web content saved by users so they could read it later without the ads and other distractions.

They released their first app just over a year later, and have since grown an ecosystem of over 500 apps. More that 240 million items were saved by Pocket users last year, including all types of content from blog posts to videos.

In fact, much of the more popular content saved to Pocket is not text but video, and that was part of the reason why ReadItLater changed their name to Pocket in April 2012.