It has been exactly six months since Remarkable started accepting pre-orders for its 10.3″ E-ink writing tablet. In that time it has sold 100 million kroners worth of tablets (around 28,000 units, according to today’s email, or $11.8 million USD). 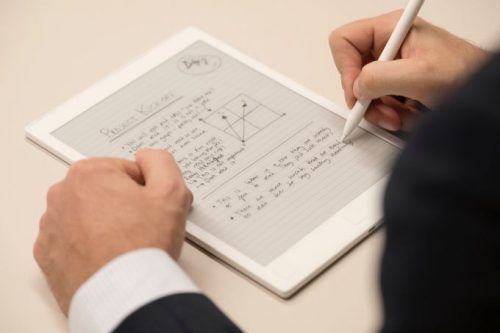 But the big news today are the early buzz in the tech press. The Verge, Laptop, Digital Trends, Cnet (beware the annoying auto-play video) and other sites have posted stories on the Remarkable today. Several of the stories are being described as reviews, but you might want to take that with a grain of salt.

I am getting the strong impression that all of these stories are based on reporters getting to see the Remarkable at a press event. That makes them less "reviews" than coverage of a launch party.

But either way, we now know a lot more about the Remarkable than we did last week.

For starters, we can see it in action in Cnet’s video:

The Remarkable runs a proprietary version of Linux on 1GHz CPU with 512MB RAM and 6GB of internal storage (specs).

It also has Wifi and packs a 3Ah battery into 350 grams, but the more important detail here is the display (and the software to run it, of course).

One of its strong points, according to the company, is extremely low latency in the E-ink screen’s response rate. Remarkable says they spent several years getting the latency down to 55 milliseconds.

While the first-hand reports say the tablet is that fast, it’s hard to believe that Remarkable did the work given that the company boasted little hardware  engineering talent when the tablet launched last November.

The tablet also has a multi-touch capacitive touchscreen which is also pressure-sensitive (2048 levels of pressure sensitivity, according to the specs).

That pressure sensitivity is attributed to the Remarkable’s stylus, but several of the stories say that the stylus is passive, not active. Those stories also give the impression that, aside from replaceable felt tips, the stylus is just plastic.

Nevertheless, several of the reporters who saw the Remarkable tablet were impressed.

The real standout feature to me was the feeling of writing on the tablet. The reMarkable screen isn’t made out of glass, but rather a more durable and fricative material that really does feel like writing on paper with a pen or pencil. Even the sound is a delightfully tactile scratching that mimics the experience of writing in real life. The reMarkable pen tip does wear down, however, and will need to be replaced from time to time, although the pen does cleverly conceal a spare tip hidden in the top of the pen.

Why not use an iPad Pro or Surface Pro 4 ($635.48 at Amazon.com) and a pressure-sensitive stylus instead? That’s a question that the ReMarkable tablet still needs to answer. But it looks like it nails making e-ink sketching feel real. Or, nearly real.

I’d love a Kindle that had a note-taking feature like this. But I don’t know if I’d pay up for what ReMarkable’s offering yet.

I spent some time in the Notebook app where drawing options sit along the left edge. You can hide the menu options if you just want a clean drawing or writing surface. Pen options include markers, pencil, pen, ink and all are nuanced enough to satisfy the demanding artist or note taker. There are more sophisticated tools like layers, and the ability to marquee portions of your notes or sketch and move, resize, rotate or copy them.

Obviously, none of this is, ahem, remarkable in the world of tablets, but to see it all work easily and smoothly in electronic ink is impressive

The other coverage, including Stuff.tv and Venture Beat, were more descriptive and less opinionated (except for Business Insider, which read like an advert).

Pre-orders for the Remarkable tablet are set to ship in August. If you buy on now, it will set you back $479 and will be scheduled to ship in October. 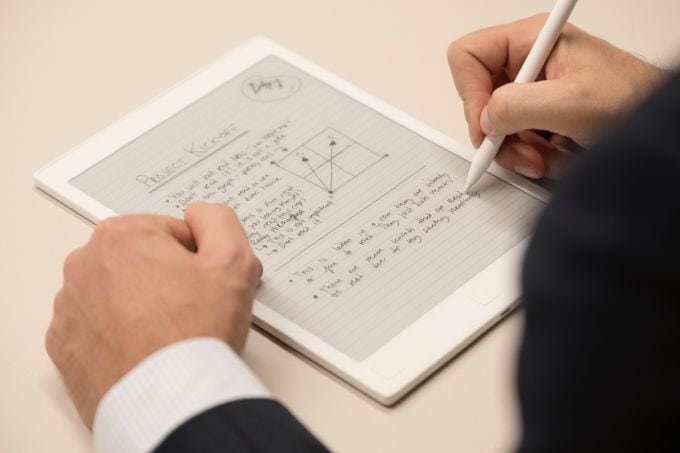 No engineering talent at ReMarkable last November? Their CTO since October 2015 is Martin Sandsmark. Perhaps you should read up on his contributions to KDE.

It’s remarkable how much coverage they get in one day. The marketing team knows what they are doing.
BUT with no Android, no? Bluetooth, low specs (512 RAM, single core processor) with smaller screen then Sony’s Digital Paper is hard to believe they are going to ship.

The reason that they can achieve low latency is basically because they are not using Android, on their website it says "Codex, a custom Linux-based OS optimized for low-latency e-paper", why would someone need Android on such a device? most if not all the apps in Google store are optimized for different type of devices, and they would function badly on this one, it’s seems to be functioning quite well for what it’s designed to do.

Running on Linux isn’t so amazing or unusual.

Kobo’s devices run on Linux. And Netronix, which is almost certainly the hardware partner, offers Linux firmwares as an option along with Android firmwares.

Kindle ereaders runs a modified Linux kernel, which is what Android is using as well. Since it is open source that is free to use and very stable, it is an outstanding choice.

I don’t think remarketable is marketing it for doodling only. Single core and 512 RAM in 2017 is pathetic. Can’t believe they are making this since 2013.

The CPU specs make me think this is rally just an off the shelf Netronix design.

Completely outdated hardware, it’s nonsense, you can find smartphones for 100 € with much better hardware. It has a good display but ridiculous hardware and very expensive.

It is an active stylus. It is not a capacitative screen. it is Wacom EMR technology. See the differences here:
http://www.wacom.com/en-ch/enterprise/business-solutions/resources-and-information/emr-benefits

The specs say it has a capacitive touchscreen screen.

And yes, there has to be something like a Wacom screen in there to do the pressure sensor. But that doesn’t mean it is an active Wacom stylus; there are some that are simply interchangeable pieces of plastic (I have ereaders I could show you).

The pen tip on the picture doesn’t look Wacomore. For 100 dollars more, I can buy an over priced Galaxy Tab S3 with Waco. For 150 dollars less I can (and did) buy a Galaxy Tab A with Wacom. This seems over priced for what you get.

[…] that early buzz for the $600 Remarkable tablet had you wishing that you had gotten in on the early pre-orders, I […]