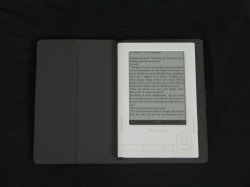 This post is rather long and it tends to ramble. I’m writing not just as a review, but also as a epitaph for an ereader that I expect to disappear from the market in the next month or so.

But first let me give you my opinion of the VEB 620: Buy something else. This ereader was Viewsonic’s first real attempt to enter the ereader market, and while it would have been fine in 2008 or acceptable in 2009, by the standards of November 2010 this is a poor ereader.

Viewsonic has been dabbling in the ereader industry for a couple years now. Their first ereader showed up in late 2008 and like most first ereaders, it was a Netronix clone. I didn’t cover it at the time because it wasn’t all that interesting, and there was really nothing new about it besides the label. Curiously enough, you can still get that ereader on Amazon 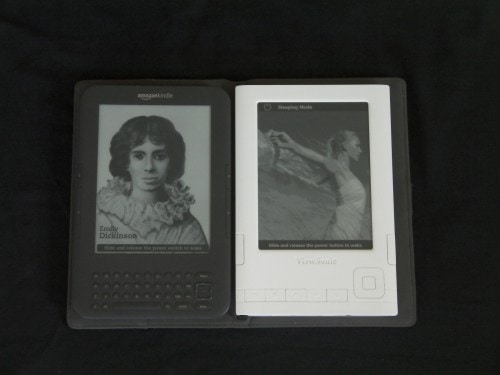 The VEB 620 was first announced in the UK in April 2010, and it was never officially launched in the US.  I was able to get it only because J&R, a NYC based electronics store, are determined to have the best ereader selection anywhere. J&R started carrying it in August, and I bought it for $99 last week on Amazon

Mike Cane tipped me to this ereader showing up on the J&R website back in August. He also took the time to visit a J&R store and fondle the VEB-620. You can read what he says in order to get a second opinion. I don’t always agree with him, but this time he was right. 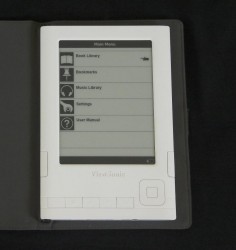 This ereader is based on a 6″ E-ink screen, but there’s no touchscreen or Wifi. It has the power switch on the upper edge and the SD card slot, headphone jack, and USB port on the lower edge. There are2 page turn buttons, a d-pad, and a row of 5 buttons (back, menu, home, bookmark, font size) on the face of the device. There’s also a speaker on the back.

It ships with a black book style case. 2 pins on the leftmost corners hold the ereader in the case. The pins feel like cheap plastic, and I’m afraid they’ll break and leave me with no way to use the case. BTW, Sony are using a similar design with their cases, only Sony’s design feels much sturdier.

The overall design of the ereader is minimalist (which I usually like), but not this time. The labels on the buttons are subtle and thus difficult to discern by touch, and they are also not that easy to see because they’re the same shade of white. I’m also not pleased with the build quality.  The 5 buttons do not line up either horizontally or vertically (they don’t stick out the same amount).

I don’t see why the VEB 620 doesn’t have 2 pairs of page turn buttons on each edge; there’s certainly room for it around the screen.  And lastly, the back panel is a single piece that snaps into place so you won’t be able to replace the battery without prying it off (and probably scratching it in the process). 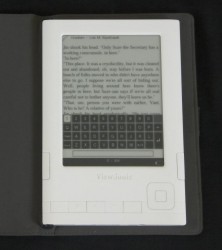 There’s no really interesting software features that I can find. Well, it has a MP3 player, but so do everyone else. Other than that this is basic ereader running Adobe software. It does support DRMed Epub and you can reflow PDFs, but at this point so can everyone else. The only annotation option is bookmarks.

You can also do a text search and page jump inside an ebook, but to do that you’re forced to use the onscreen keyboard. It’s not worth it. Check out the video to see why.

This ereader is slow. It’s the kind of slowness that would be tolerated in 2008, but I won’t in 2010 because I have other options. The screen is not the cause; IMO the software needs work. You have to press and hold a button and wait for it to respond. If you’re in a menu, you can’t press the down arrow several times; it will only respond to the first press.

The VEB 620 is okay to hold one handed, but with the slow page turns I abandoned it pretty quickly.

This ereader cost me $99, and it’s not as good as other you can find at that price. Augen The Book is better, and the Ectaco Jetbook and Aluratek Libre are just as good.

But if you did get one as a gift, it should work okay. It’s only real problem is that it’s slow. 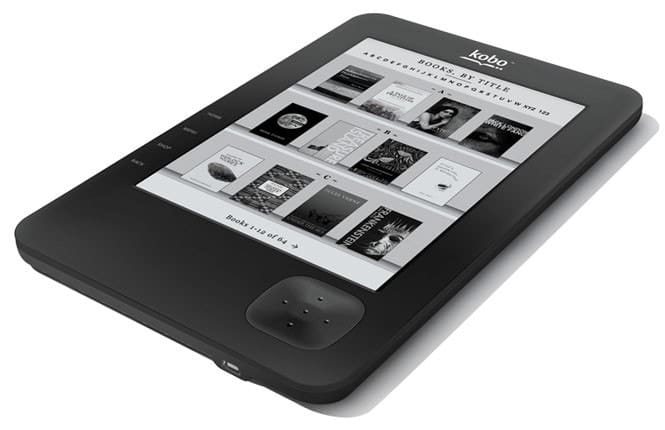 Man, I can’t even look at the video. I’m still scarred by my original fondle months ago. J&R is still stocking this, btw. Poor them!