Rumor: 10″ Kindle Fire Still in the Works, Coming This Year 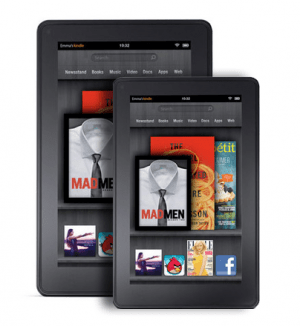 Now that Google has officially launched the Nexus 7 Android tablet it id time to turn our eyes to the next major news: the Kindle Fire.

Boy Genius Report has an inside source which is telling them that Amazon is indeed working on that larger Kindle Fire, along with a new 7″ model. They’re going to both be serious upgrades to the current Kindle Fire, which BGR describes as being poorly built. I wouldn’t have thought so, but that could just be me.

The overall shape of Amazon’s new slates is described as a thinner version of the first-generation iPad but there are no buttons on the front of either device. The 10-inch model includes a front-facing camera according to our source, and both new Kindle Fire models include a microUSB port and one additional jack that our source speculates may be an HDMI-out port.

The 10″ Kindle BonFire (as I call it) is reportedly running on a quad-core CPU, though we still don’t know which one. BGR claims that it is the same  rumored 10″ Kindle tablet they reported on last year. TBH, I’m not completely convinced it exists.

They didn’t make any claims about the launch day, but you might recall that only a few days ago CNet speculated that the new Kindle Fire will be revealed in July. Let’s see if that happens.

Is anyone else feeling burned out when it comes to Kindle Fire rumors? I am.

HDMI out would be sweet. If I could hook my tablet up to my TV to stream stuff, I’d be very happy. That would be more convenient that using my laptop with HDMI like I do now.

I deleted it. Try again.

I hope they get rid of the carousel, or create a way to turn it off.