Bendable and rollable screens promise the ultimate compromise between screen size and pocketability, but so far they have shared the same problem: flex them more than a dozen times and they break.

Samsung’s newest demo might fix that. they’re going to be showing off a stretchable AOLED screen at SID Display Week in the next few days. 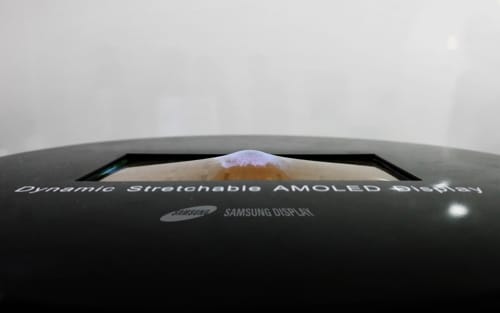 Samsung told Yohnap that the stretchable display was unique since it can bend in both directions, unlike previous flexible panels could only bend in one direction. The South Korean company said its display can stretch as much as 12 millimeters when pressed, and yet still maintains a high degree of resolution.

Samsung plans to demo 9.1″ versions of the stretchable OLED display. If it reaches production status, the display could be used on devices that need an impact resistant screen.

And if the tech can be adapted to also support E-ink screens then we could see the end of E-ink screens breaking simply though being jostled in a bag.

Things We Never Told You: Ode to a Bookstore Death

But they shine, not reflect the enviromental light like eink, aside consume a lot of battery…

They are reflective, true.

But so far as battery life is concerned, so long as people are willing to use oled screens with a black background and white (or grey) text, they really don’t burn through too much juice. Since the thing about this screens is that when black the pixels are actually turned off.

Then, why they aren’t making e-readers with OLED screens? I guess grey scales would help to avoid eyesight damage.