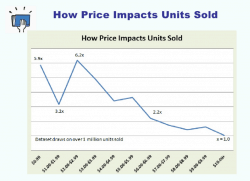 There’s long been a debate about the best price for ebooks, but very rarely has anyone ever released real market data which would answer the debate.

The major publishers believe that more is better, and there’s a solid group of indies who think that there is no floor to the price of ebooks, but if there is they want to find it.

Who’s right? I don’t know, but some data recently released by Smashwords sheds light on this turbulent topic. Smashwords is the largest self-pub ebook service in the world with over 100 thousand titles from 30 thousand indie authors and publishers.

I’m pointing out that statistic because it’s what makes Smashwords a case study for ebook pricing which cannot be duplicated elsewhere (outside of Amazon). The vast number of independent actors and their offerings gives Smashwords to mimic a pint-sized version of the ebook market as a whole.

It’s been quite some time since Smashwords last released data on how prices drive sales (2010, I think), but it was well worth the wait. Mark Coker, founder of Smashwords, gave a talk at a romance conference a few weeks back this specific issue. The slides are available online, and I’ve been taking looking them over this afternoon.

There’s an awful lot of useful info in the slides, but here is the money shot. The following chart shows the average number of sales per title based on the price point. Example: An ebook priced below a buck will sell 5.9 times as many copies as one price at $10 or above. 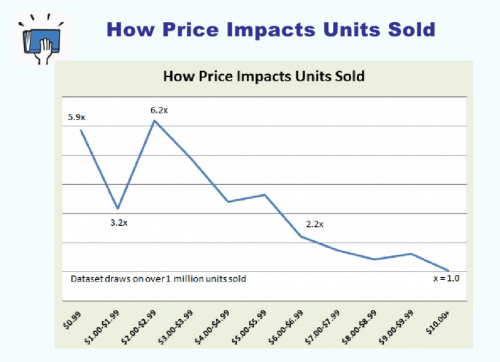 Note the second spike at the $2.99 price point. Interesting, no?

Consider what happens if you take one of those $10 ebooks that the major publishers fear so much and mark it down to $2.99. It will sell more than 6 times as many copies and make 86% more per title.

But there’s a lot more to the slides. For example, Mark also plotted the average length of ebooks vs the number of copies sold. Smashwords' bestsellers (the top 50) generally averaged a length that was over 100, 000 words. 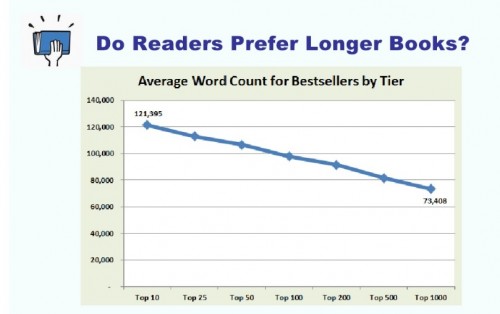 What’s even more interesting was that the top 40 bestsellers in the romance category averaged less than 65 thousand words. Clearly romance readers like their ebooks short and sweet. 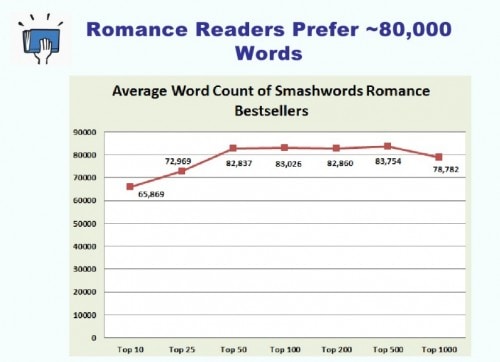 I’d like to share one last detail with you before kicking off. A later slide had data which showed was that the $5.99 price point might generate the most income. The following chart shows the relative yield per title for each price point. Not where the spike is. 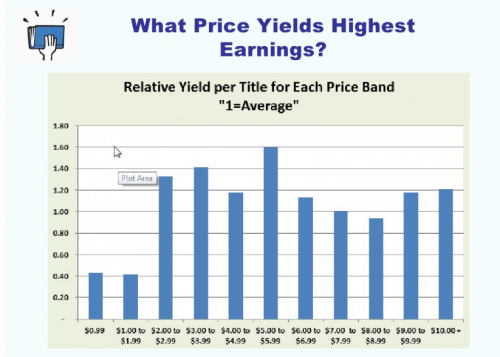 While I would still prefer to see a $3 ebook, clearly there’s another sweet spot higher up the price chart.

Will the New Kindle Unlimited Expansion Cause Another Dip in Author Payments?

Kobo Teases August Launch Date for its New 7.8″ eReader. the Aura One

Thanks for that information. I’ve gone for 2.99 for my latest ebook – looks like that was a good choice!
Personally I’d be reluctant to pay 5.99 for an ebook but it’s interesting to see that it’s the most profitable for authors.
Possibly the longer books are more popular because readers perceive value-for-money?

I don’t know about other readers but I check the length of the ebooks I buy. That often tells me how deep a story is. And yes, longer is often better.

The yield numbers are consistent with BAEN’s Webscription prices: $6 as singles and ~$3 in the monthly bundles.
They also are consistent with what is known of Amazon pricing; the floor for the 70% royalty is $3 and the average price of the entire catalog runs in the $6-7 range.
(That $3-6 range is pretty much where all my commercial ebook buys lie. I’ll buy the odd $0.99-1.99 title but most of what interests me runs there.)

The BPHs are doing small and medium publishers a big favor by providing such a big pricing umbrella and "donating" all that market share in the name of protecting "perceived value". 😀

Personally, I still like $2.99. I may earn slightly less, but I’d move almost twice as many units. That seems like it would be better for the intangibles: building a fan base, earning a good chart position, getting attention from bloggers, and so forth.

[…] pricing. This is a tough one, and I can’t tell you where the magic price point is. (There is data out there, though.) As a book buyer, I know you have costs: marketing, distribution, staffing, etc. […]

[…] $3.99 would become an ‘optimal’ price point over the entire body of e-books. Smashwords recently released a few graphs showing the number of sales per price point, and the profit of each price point. The […]

It’s nice to see folks discussing price points, but I’d like to see some clear data on how many sales the majority of authors have. These "averages" always are based on the top sellers, usually under 100 authors.
If Smashwords has 100,000 titles, that pretty much means the vast majority of authors are wasting their time on Smashwords.
I’d like to see some statts on childrens books, as that is what I write. Once again they focus on "romance", traditionally a big seller. But what good are those stats to the majority of us who don’t write "romance".

An interesting article indeed. It seems that their may be a decent profit to be made both at the low and medium ends of the spectrum, one working with volume, and the other with a higher price tag.