Several third-party Twitter clients have long enabled users to open links in a web browser contained in the app, and now it looks like Twitter is adding the feature to its official apps.

Several of Twitter’s beta testers are reporting that they now have access to a built-in web browser for opening links. Android Police reports that this appears to be a server-side change, so you can’t just install anew version of the official Twitter app in order to enable it. 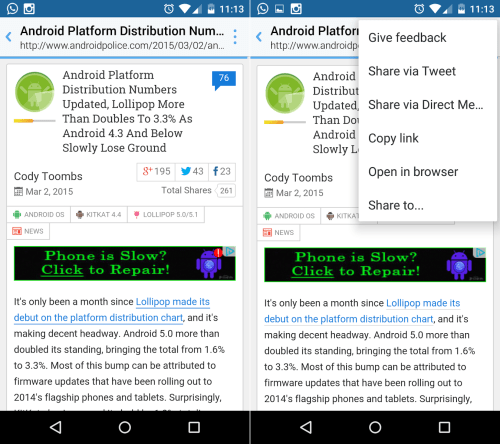 The in-app browser shows a cleaned up version of the webpage. From what I can see, this doesn’t appear to simply be the entire webpage.

For example, the screenshots shown above are missing the page header from that site, which suggests that Twitter is going to be digesting a linked webpage before showing it to users. But the limited view might not suit everyone, which is why Twitter is still going to let users open links in a full web browser.

There’s no info yet on whether this feature is just being tested in the Android app vs the iOS app, but I’d bet Android users are going to appreciate it. That OS has always had a problem with inconsistent behavior on the part of the back button.

That’s a relatively minor annoyance, but it would be nice if Twitter solved it. Facebook added a similar feature a while ago, and probably for the same reason (to keep users inside the app).