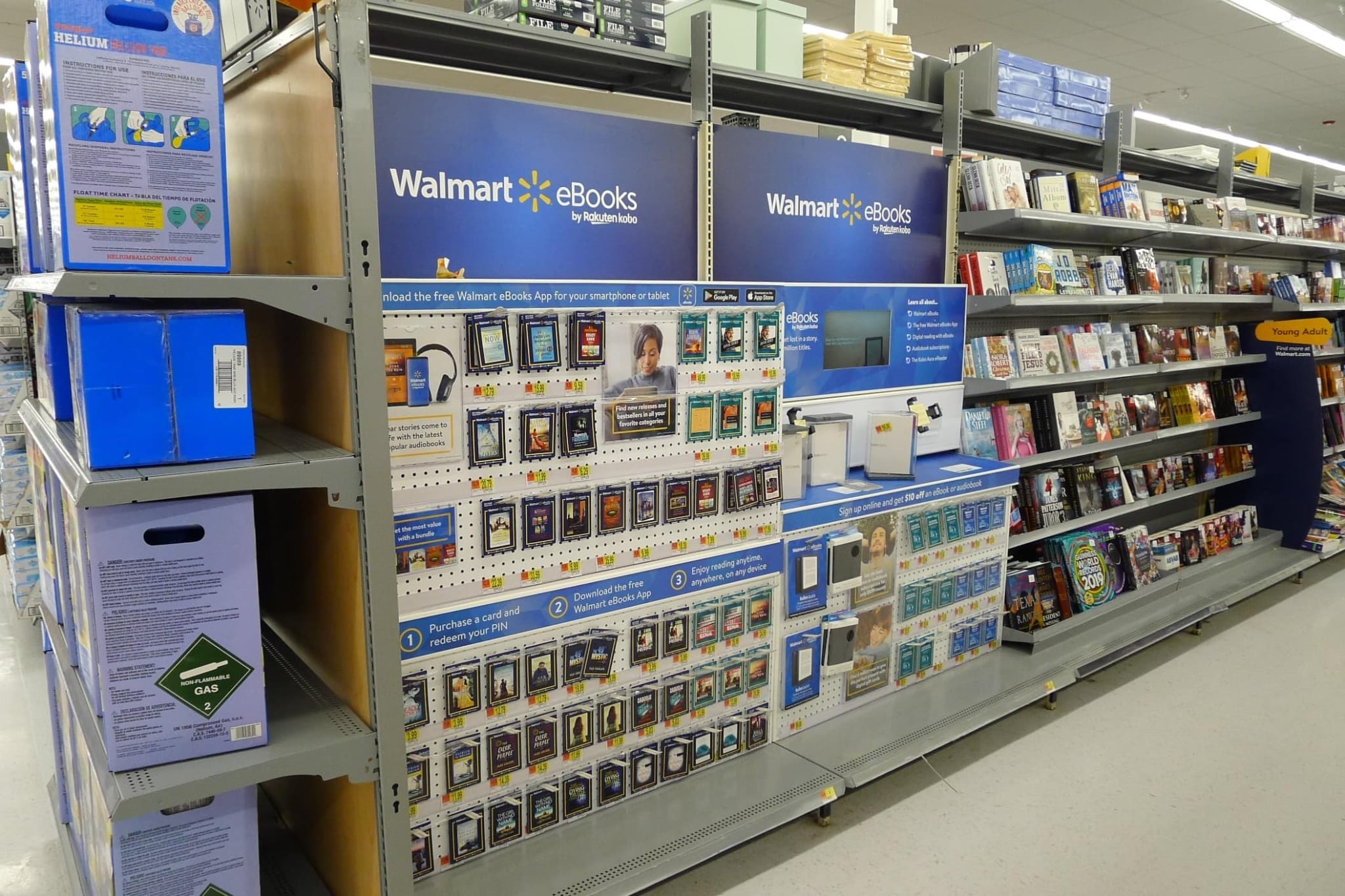 When Walmart and Rakuten Kobo first announced their partnership in January, a few hopeful souls thought that Amazon finally have a real competitor in the ebook market.

I am sorry to disappoint them, but Walmart doesn’t care as much about this market as they do.

I finally had a chance to visit my local Walmart today and look for the ebook display. It took up two panels in the book section, and was located in a great spot: the corner of two of the main aisles.

That was all it had going for it. According to the pricing stickers, the display had been there since August 22, but no one had bothered to fully set it up or maintain it. They hadn’t even bothered to put out the display units:

Do you see those Kobo Aura boxes? They’re supposed to be behind the counter in the electronics department.

And that shrink-wrapped packet of cards is supposed to be on one of the hooks, only no one had bothered to follow through.

Speaking of ebook cards, the hooks are still covered in the tape that was used during shipment to keep the cards from sliding around. You literally cannot buy an ebook, audiobook, etc without removing the tape:

How many people do you think would even bother?

I did, which is how I know that the cards offer zero incentive for me to complete a sale. The back of the cards don’t even have a blurb, much less any other detail that would appeal to readers.

Folks, this is not a serious attempt to sell ebooks – not in any way, shape, or form. This display tells us that the only thing Walmart cares about is being about to boast that they sell ebooks in store.

So long as Walmart can say that in their quarterly statements, they are satisfied. Actually selling ebooks – well, I doubt that is even mentioned on the same slide deck. 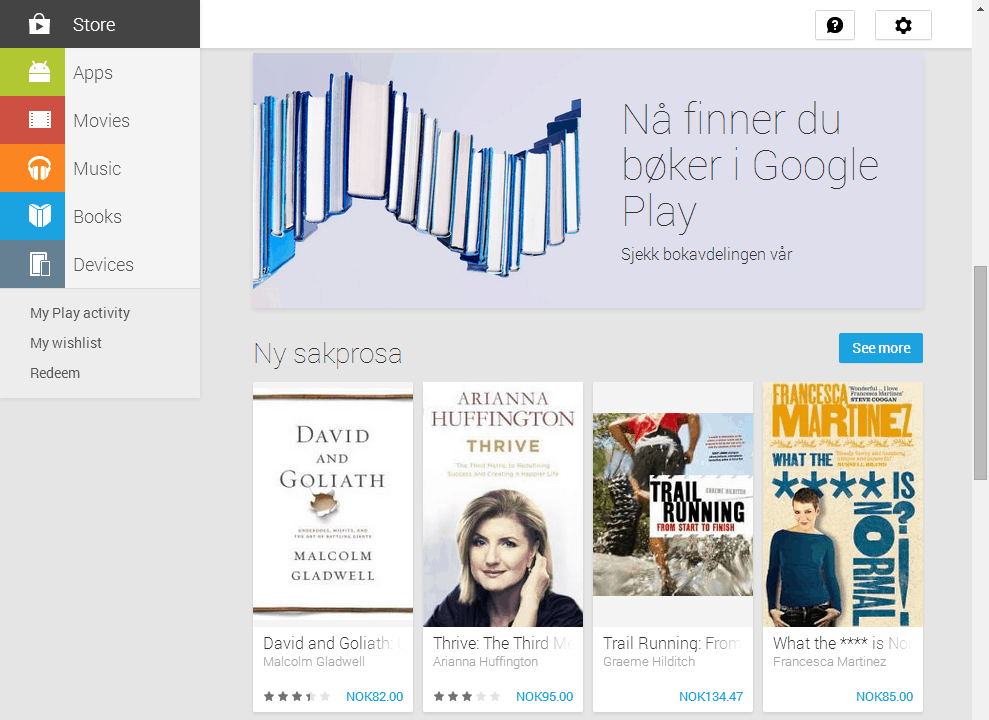 Is the Hiatus Ending? Google Play Books Launches in Norway

You are so correct. I don’t know how Kobo can expect to successfully sell Kobo devices let alone ebooks. The Walmart in my area has one section devoted to the ebook cards. No devices or cards for ebook readers. There are no sample devices for people to play with to experience the devices. No devices on hand to buy right away which means no impulse buys. Walmart employees at my store do not even know what a Kobo is. This is the worse partnership Kobo could have made. It is such a shame. Using Walmart will not help people to learn about Kobo devices. Beat Buy would have probably been better.

So Walmart is doing the retail version of specsheet engineering.
Like Google, the least they can do is the most they will do.
Bezos' crew must be laughing their rears off.

They still do in Canada. As well as staples/bureau en gros.
xavier

A couple comments. First, Walmart is currently contracting out the Kobo display maintenance to outside companies. Walmart employees aren’t even involved. (Doesn’t look like Walmart is getting their money’s worth.) Second, in April of 2019 Walmart plans to integrate the Digital eBook section into their floor plan (so the current situation is stop-gap — why, I have no idea). Third, I’m pretty sure the in-store display is more to make people aware of Walmart’s online Kobo eBook store. The idea is to compete against Amazon (who is almost entirely online).

"(Doesn’t look like Walmart is getting their money’s worth.)"

I should say not. Back in the ’90s I worked for a merchandising company. There would be a big push prior to rollout for something like this, and the rollout would last perhaps a week, so you had enough time to get to every store in your territory. What we have here is simply a disgrace, and somebody ought to be losing his job.

The cards are a total fail. They have the book title and author’s name on the front and that’s it? So, to find out anything about the book you would have to… look it up on your phone?

The cards should work fine for King, Patterson, and whatever bandwagon book is hot. It’s not as if anybody goes to Walmart to discover a new favorite author.

It is actually worse than that. Some are just bundles with almost no description.

I actually thought the bundles were a pretty cool idea. They were completely wasted on Walmart’s hooks, but I did like the idea.

Wow, your photos here tell a sad tale… The book cards should be a nifty idea, if done right! Even in a neighborhood indie bookstore: see the real book on the floor while you sip your latte and socialize, scan the card on your phone to purchase and download immediately; and the indie store gets their cut. Pretty unlikely scenario. Walmart will probably be shoveling all this into a landfill next year.

So my Walmart actually looks worse than the picture, because there are no ereaders on display. Just the ebook cards.

At least I could pre-order the Kobo Forma and cover through Walmart. Much better than ordering through Kobo due to reliability, CS, accurate tracking etc. being a mess on the hardware side of Kobo.

The Walmart where I live in a small town in Arkansas (Walmart’s home state) doesn’t have Kobo’s or book cards or anything else. No employee in the store ever heard of them including the manager and assistant manager. One employee did look to see what they have on the internet at my request but she expressed doubt that they were actually available. I was able to find them on the internet on Walmart’s site when I got home and they are available. But the store was no help at all.

I live in Arkansas, too. And as you probably know, Walmart doesn’t really pay or support workers enough to make them care or want to learn how to do customer service. Last year at this time, I got to listen to one of our geriatric checkers talk about how they were hiring NO extra holiday workers. Earlier this year, they put in a whole bunch of U Check lines. You’re lucky to find more than one register with an actual person at it.

But, we’re also a bit behind on the ebook train here. My county library doesn’t carry ebooks at all, for instance, even though there is an Arkansas Digital Book Consortium they could easily join and many in my community would benefit from it. The library is open M-F 8-5 and on Saturdays til noon. No Sunday hours at all. So, how is it people who work or are shut ins supposed to use the library?

The whole idea is ridiculous. One of the greatest strengths of ebooks is that you don’t need to go to a store to purchase them. Readers? Well, it is nice for people to be able to look at and have a play with them. And the price of Kobo’s, so far as I know, is pretty constant through all channels, so showrooming should not be a problem. I doubt Amazon is at all concerned by this development.

It’s actually broken just as bad on the website. If you go to walmart.com and search for an author/title, they only bring up the paper book, assuming they have it. You can select 'ebooks and audiobooks' from a hamburger menu, but if you try to do the same search on the resulting page you still wind up with a paper book. To search for an ebook, you have to find the ebook TAB on the books PAGE and click on THAT, which takes you to kobo.com where you can THEN search for author/title, but only on kobo’s site.

Try it yourself. Go to walmart.com and search for margaret atwood. Now, find an ebook by her.

tldr; ebooks are totally separate from Walmart’s site and it’s not obvious at all how to get to walmart’s skin of kobo.

Kobo’s partner in the UK, WHSmith, have the same approach and lack of care/concern. None of the staff have any idea about the product, the demo kit it just like the photos here and the section is frequently ignored by all. Someone from Kobo needs to be monitoring and managing this. It’s bad for their image and reputation.

Eh. It seems like nobody really cares about selling ebooks besides Amazon, and that "nobody" includes corporate publishers, who’d prefer you buy print anyway.

I’m still really hoping for an October 30 Apple event that at least mentions Apple Books, but my confidence in it is waning by the day.

W.H.Smith -even worse the batteries of any reader have run out. The readers are also glued and screwed down so you cannot lift them to see how light they are.

I do not like Wal-Mart they drove my k-mart out of business 15 years ago. I had to go on the local store Facebook page and complain weekly about no baskets for two years for them to buy new ones. Only plus to that seems when they all get stolen they pretty quick replacing them guess they learned there lesson. Last time they added loss prevention tags to them. Only store hate worse is Kroger. Thankfully Publix is tolerable. E-book future is bright maybe wal-mart buy b&n.

Similar situation in Canada with Chapters/Indigo. My local Chapters has a display with Kobo models chained to the counter and a sign that says Kobo devices are no longer sold at this store, try the store on the other side of town. There were also Kobo gift cards, but the display was not as well maintained as the racks by the checkouts at the grocery store. Lot’s of denominations were missing. I’d be interested to know how many gift cards Kobo sells through Chapters/Indigo versus grocery stores. Kobo is a major player in the Canadian market, and their main brick and mortar partner just can’t be bothered.

Maybe they aren’t doing it in brick and mortar stores, but then I kind of doubt Amazon locations focus on ebooks either. I argue that most folks who are ebook friendly, or audiobook friendly, are more likely to buy online. And their site is pretty slick and offers a competing audio service that is 2/3rds the price of Audible.

My point here is that I just don’t think we can gauge their dedication and support based on a store visit. Would better store management and such help win over shoppers who are currently buying print books to pick up a Kobo reader and start buying books? Sure. Will Walmart try a more targeted approach to get folks to give Kobo readers and cards as holiday gifts? Probably.

And, the Kobo store run by Rakuten and Walmart is a different estore, as well. Do I think Walmart should have a prominent "ebooks" button on their regular page? Yep. And they may well get there. But most Walmart shoppers don’t go to the website for books, just like they don’t go to Rakuten’s other sites like VitaCost looking for ebooks or Kobo’s site looking to buy snacks.