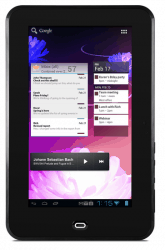 I’ve been running this blog for over 2 years now and today I am reminded about one thing I’ve learned in that time. I sometimes need weeks to understand the nuances of a device and post a review, while with other devices the review gels in the first few minutes of use. The eGlide 4 definitely falls in the latter category.

This tablet was announced by Ematic (a tablet maker that I’ve reviewed a bunch of times) last week. It caught a lot of attention because it was selling for $80, making it the cheapest Android 4.0 tablet that a lot of  blogs had seen. It has specs like many sub-$100 tablets, including a 7″ capacitive touchscreen, 1GHZ CPU, 4GB storage, microSD card slot, Wifi, and more.

I ordered one the day I heard about it, and it arrived on Saturday. I played with it Monday afternoon, and I immediately knew that I wouldn’t wish this tablet on anyone.

I normally like to take a week to post a review. This usually gives me enough time to really get a good idea of how well a device works and identify its quirks.  But in this case I don’t have to do that. The eGlide 4 has an overwhelming flaw that moves it directly to my “don’t buy” list.

It is laggy to a degree that I have not seen in years. The responsiveness of this tablet is not poor so much as it is terrible beyond belief. It takes a long time to load apps, the apps take a long time to load levels, and even simply opening the app menu takes longer than I like. It takes so long to respond to my touching the screen that I was having flashbacks to the original Pandigital Novel. Yes, it truly is that bad.

I can confidently say that this one of the 2 worst tablets I have seen this year, and I’m pretty sure it edges out the Coby 7033 that I reviewed a couple months back. At least that tablet didn’t have this lag.

There comes a point where cutting corners on quality in order to reduce cost becomes a very bad thing. And with this tablet I can confidently state that the extra $10 to $20 that you would spend to get another tablet is entirely worth it.