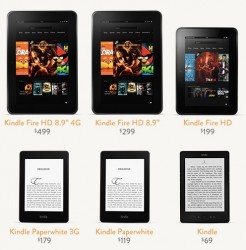 I was thinking back over the Amazon event yesterday when I realized that Jeff Bezos had parceled out some background details on the whole agency pricing, anti-trust situation and I’m not sure anyone has connected the one with the other.

If you’ve been following the anti-trust lawsuit then you probably know that much of the publishing industry has spoken up on behalf of the conspirators. Many, many of the commenters have asked Judge Cote to not end the agency pricing model, where publishers control the sale price of ebooks, because of what they feared Amazon would do. With the settlement now certified by the judge, lots of people expect Amazon to now cut ebook prices in order to seize market share and drive out the competition, after which it is assumed that Amazon will jack up prices again.

If you paid attention to the presentation today then you could have picked up hints that arguably those fears are ungrounded.

At one point in the presentation Jeff Bezos explicitly spells out Amazon’s current business model for the Kindle and Kindle Fire, and it’s pretty simple. They sell hardware cheap in order to get you in the door, after which Amazon makes up the difference and all their profit by selling you content. The Kindle Fire is a portal through which Amazon sells stuff; that’s why the original sold for so close to the BOM.

Now, this has been Amazon’s business model since at least last September, when they unveiled the Kindle Fire and cheap new Kindles. And in fact a number of bloggers figured this out both before and after that launch event. Some even predicted it several months in advance.

With that in mind, have you considered what this business model means for ebook prices? I would think now that Amazon is using ebooks to subsidize hardware sales it means they likely won’t be using such deep discounts any more. (Actually, i don’t think Amazon ever discounted ebook prices nearly as much as some now believe; the horror of the tale has grown in the retelling. But that’s another post.)

But if Amazon isn’t going to use deep discounting then all of those fears are bunk. What’s more, they were bunk at the time they were first expressed, considering that they were penned months after the Kindle Fire launched. This is one of the issues that Bob Kohn raised in his 5 page comic, and as you can see there’s little evidence to support the belief.

So the next question that comes to mind is: When did Amazon decide to adopt this model?

At the very least it had to have happened long enough after the launch of the Kindle that publishers had time to panic of the deep discount pricing model. As one reader pointed out in the comments, Amazon launched the Kindle with $9.99 best sellers as a selling point.

It’s my guess that Amazon happened upon the idea in 2010. I’d pin the date down to some time  right after Agency Pricing was foisted upon them and right before Amazon got into that ereader price war with B&N. Once Amazon had the K2 priced near cost and ebook prices which they couldn’t discount, it made a lot of sense for Amazon to use one to support the other.

So yes, I think Agency Pricing is the reason that ereaders are so cheap today. If I’m right then the Price Fix 6 are also to blame for all the many companies who got out of the ereader market in 2010. As a consequence of their attempt to hobble Amazon, these 5 publishers may have been responsible for killing off a number of Amazon’s potential competitors and thus making it easier for Amazon to dominate the market.