Late to the cross-platform game, Microsoft has released an online version of Office, OneDrive apps for PC and mobile, the Office Lens document scanning app for Android and iOS, and now a clipping app which can automatically sync your work across Android, iOS, and Windows.

Microsoft OneClip leverages OneDrive to easily copy and paste documents, website URLs, phone numbers, photos, text, and more to share between your devices. The app hasn’t been launched yet but earlier today beta versions of the app for Windows, Android and iOS leaked (download them here). There’s also a version for Windows Phone 8.

After it’s installed the app records all of the screenshots, copied text, bookmarked URLs, and anything else copied to your clipboard. It saves all the clippings in the app and lets you pin, delete, or re-copy any of the clipped items. You can also open them in the appropriate external app.

I have the app installed and running on Windows 7 and Android, and just to be clear it really does grab everything (the app runs in the background on Android), so if you have anything you don’t want passing through Amazon’s Servers then you had best hie yourself to the settings menu.

There’s an option under the settings menu to ignore any of a half dozen different password-keeping apps like LastPass, and you can also name specific apps for it to ignore. 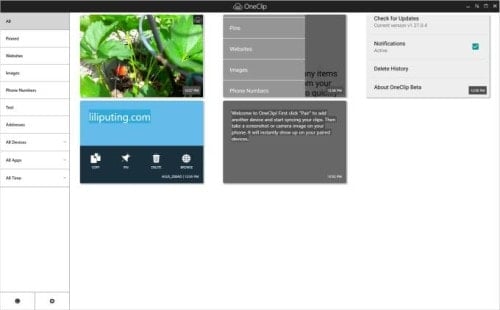 All in all this looks like a pretty useful app. As some have pointed out, OneClip is quite similar to Pushbullet, but as someone who hasn’t tried the other app yet I find OneClip incredibly easy to use. I take a lot of screenshots on Android and my iPad, and this app will make the process of transferring those screenshots to my PC so much easier.

On the other hand, I’m told that Pushbullet has similar features as well as a few OneClip lacks. This app supports Android, iOS, Windows, OS X, and in addition to pushing clipped items to a cloud-based clipboard it can also send notifications from your smartphone to your PC. If you get a call or text, Pushbullet will post a notification on your PC’s screen.