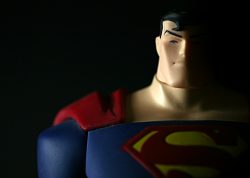 For nearly forty years Marvel and DC have jointly defended a trademark on the word superhero, but now these two titans have been thwarted by a solitary London businessman.

But after a two-and-a-half-year wrangle with Graham Jules, it is the combined might of the comic book giants Marvel and DC who have raised a white flag after initially claiming that using the word superhero would infringe their jointly owned trademark.

Jules, a 48-year-old who runs a firm setting up pop-up shops and is studying law, had been about to publish his self-help manual Business Zero to Superhero in 2014, when he got a warning letter from the two companies.

The Londoner fought back and, at one point, rejected an offer of “a couple of thousand” to change his book title.

Now, the publishers have backed down and admitted defeat four days before a planned hearing at the Intellectual Property Office in London.

The trademark was filed in 1979, and from what i have found DC and Marvel have bein defending it for all that time. In 2004 Geekpunk announced that it was renaming one of its comic book titles to Hero Happy Hour in response to a letter from DC and Marvel, and there’s another report to the effect that a 1980’s role-playing game had to drop “superhero” from the title due to threats of legal action.

There’s even an FAQ on the subject over at CBR.

It’s not clear why Marvel and DC caved, but we do know that maintaining control of a trademark hinges on whether the public is likely to associate a word or mark with a given company rather than just as a general term.

Aspirin, for example, has been genericized, and so has the word thermos. For DC and Marvel to keep the trademark on superhero they would have had to show that the public associated the term with the two companies.

Tell me, if you hadn’t known that they owned the trademark, would you associate the term with these two companies, or would it make you think of something like “guy who flies around in a cape and fights crime”?

I would bet you the cost of a focus group that the most people would say the latter.

And that’s why Marvel and DC dropped the case.

Given that the term predated the trademark registration and that many of its uses (describing Superman, for example) have no obvious connection in the public’s mind to either company, many people considered this to be a trademark backed up by deep pockets but no sound legal arguments.

And now it’s clear that is indeed the case.

How long until someone challenges the trademark in the US, do you think?