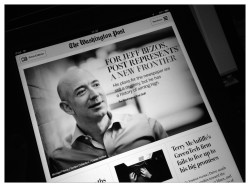 While reading a story in the Jeff Bezos-owned Washington Post, I saw that the paper had begun embedding Amazon Buy-It-Now links in the middle of story sentences. For example, in this article, a sentence about the sales figures for differing covers of The Great Gatsby read: At Politics and Prose, the traditional [BUY IT NOW] version — featuring the iconic eyes floating on a blue background — sold better than the DiCaprio [BUY IT NOW] cover.

While I can confirm that the buttons are cluttering up that article, I’m pretty sure it’s not as big of a deal as it first appears.

In the order of least to most important, here’s why I don’t think there’s a story here:

One, this type of link is not a new concept. It’s one of the common forms of web advertising, and it’s existed for a decade or more. Sure, the links on the WP website are more obnoxious than average but they are not that out of the ordinary.  So there’s no reason to bash the WP for adding them (the rest of the advertising, on the other hand … ).

Two, The links don’t reference the WP. If you click one you will see that the affiliate tag appears to belong to Slate, which does not belong to Jeff Bezos. Slate belongs to The Washington Post Company, the media company which sold the WP newspaper to Jeff Bezos. It’s not clear how Slate affiliate links ended up on the WP website, but I do know that:

Three, The affiliate links are not showing up in all articles. I checked a half dozen articles, and I cannot see any links to Amazon. Update: Pando Daily found affiliate links in an article and a letter to the editor. I guess the links are spreading.

Based on the points cited above, my current working theory is that the affiliate links are the result of a technical snafu of some kind, but I don’t have enough information to say for sure.

I’ve tried to reach out to someone at the newspaper for an explanation but I can’t find contact info. Until I get more info I will assume that this is less nefarious and less important than it was originally described.

At the very least, there are too many unanswered questions here to reach a definitive conclusion. If I learn anything new I will update this post.

Update: Digiday has a response from a WaPo spokesperson:

A spokeswoman for the Post, however, said the paper has been embedding buy-it now links in articles “for many years” and that they haven’t been used more widely under Bezos. She said the buttons are added by the copy desk, so the writers and editors who worked on the story are not involved.

As for why the button no longer appeared in the Aug. 15 article, she explained that the in-article button functionality was a mistake. The button was dropped when the Post recently introduced a new article format, then unintentionally added back in a way that put the links into the text instead of on the side.

“It was not intentional,” she said. “And yes, the button is being fixed and will go back on the side where it has always been.”

See, I told you it was a technical snafu. And on a related note,

N2A Can Now Set Your Kindle Fire Free of Amazon

Ads like that, in the middle of a sentence, from anyone, bother me. But the ad (and I didn’t check/follow the link) in an editorial piece, is, I think, is wrong. Maybe this was an experiment that skewed and can be adjusted. Be interesting to see how this develops.

The problem with viewing these kind of links as wrong is that the idea of adding revenue links in articles is quite common and accepted; in fact there are plugins which will automatically generate the links. I have trouble seeing a common practice as wrong.

On a related note, I used to have these kind of links but removed them. They just weren’t generating enough revenue for the nuisance value.

Right, I probably didn’t phrase myself well, it’s before 6 a.m. where we’re at right now 🙂 Ads in articles isn’t wrong as a practice, I just don’t like them.

However, ads in editorial pieces, I do think is wrong. There needs to be a space where commerce is not always entitled to feel "it" is entitled. I like free enterprise, but it’s not without limits. And quite often, almost all our largest corporations feel they should be free to be free enterprise, but also free to find or create ways to not contribute (taxes) to the society that enables them.

But, that’s just my opinion, ha! lol! Couldn’t put an ad into that if I wanted 🙂

You know, kept thinking about this last night. I myself like to place embedded samples (via Scribd) in my blog posts. So I guess I was being a bit hypocritical, not liking one kind of ad insert but liking another. My only defense is I try not to place the embedded link (has an image of the book with it) in the middle of a sentence. So I think that must be the part I like least, the disruptive placement. One never knows from where inspiration to evaluate one’s ideas will come from 🙂 Thanks Nate.