Barnes & Noble released their quarterly statement today. Mixed in with the usual dry statistics was a bombshell: B&N is buying out Microsoft’s share of Nook Media. After almost two years of co-owning a moneypit, MS is selling off their interest and walking away.

In financial news, B&N reported that total revenues dropped 2.7%, to $1.7 billion, as compared to the same quarter last year.  Second quarter EBITDA also decreased slightly, from $76 million a year ago to $68 million. The press release mentions that retail was down, college bookstore sales were up, and of course Nook revenues were down.

And in the important news, Microsoft and B&N have decided to  go their separate ways. They’ve filed divorce papers today with the SEC stating that the two companies have terminated their commercial agreement.

Microsoft paid $300 million for a one sixth interest in Nook Media when it was spun out of B&N in early 2012, and they also committed to paying $300 million in operating expenses should Nook Media hit certain goals (expanding internationally, for example). According to the form 8-K, B&N will buy out MS for $63 million in cash and 2.7 million shares of B&N stock.

B&N is trading for around $20 right now, so the total purchase price will be around $120 million (plus or minus $5 million). In other words, Microsoft’s interest in Nook Media lost about 60% of its value in the time since Nook Media launched.

While that’s bad news for MS, it’s great news for Nook Media. While the company is losing out on a source of revenue, it’s also free from the constraints MS imposed. For example, the international Nook store was effectively confined to Windows 8 (the Nook iOS and Android apps were limited to only US and UK). Now there is a chance that B&N will expand the platform to also let its international customers use the other Nook apps.

Nook Media is still going to be spun out into a separate publicly traded company, but the launch day has been pushed back from spring 2015 to August 2015. 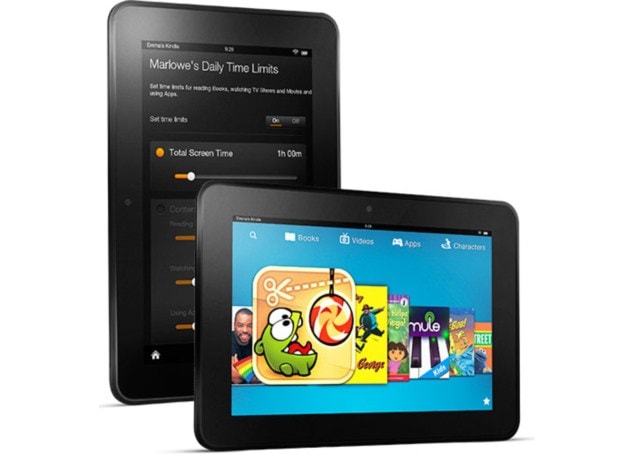 Updated: 5 Free Apps You Should Install on Your New Fire Tablet

Amazon Prime Subscribers Can Get One Year of Audible for $119, and Add an Echo Hockey Puck for $0.99

First they need a buyer.
Unless it’s Pearson, who still own 9%, right?

No they don’t. Ever heard of an IPO?

Companies with ALL of their charts in a downward trend generally don’t IPO.

Only twice a day.
But since the buyout was billed at the wsj as clearing the way for the divestiture and said divestiture was moved back yet again it follows that a straight spinoff and IPO is not what they are looking at.
What they need is somebody with the cash needed to keep the thing afloat while it rebuilds the brand.

Alibaba is right there and probably already negotiating.

Not so much MS walking away as B&N clearing the way for an outright sale that is conceivably already a done deal behind the scenes.

That might make sense but if the deal is in place, why postpone it to next august?

And why add all the new services if the deal is in the works?

Exactly. They’re putting earrings on the piglet for a reason.

It’s weekend at Bernie’s, with B&N desperate to convince everybody that Nook is still alive & kicking. Guess Microsoft could no longer stomach the stench coming from this corpse.

The Nook’s only future is six feet under, nobody buys the dead, certainly not Jack Ma.

Well, for the longest time I thought MS would pick it up. They could afford to drop half a bill to buy it, and Nook Media’s annual losses amount to a rounding error for MS.

Microsoft undoubtedly knows more about Nook and its prospects than any other outsider. They chose to walk away.

What does that tell you?

Given that MS could have bought Nook simply to disassemble it for parts, you have to wonder why they didn’t.

The thing was Nook is, while it might be running at a loss, it was never going to progress fully under B&N, which would have meant cannbalising its own b&m stores. It was always a half-way house measure.

By contrast Amazon has a vested interest in a rapid transition to digital. The more ebooks it sells instead of the same print version, the more it saves on warehousing, packaging and shipping.

Nook is fundamentally a sound prospect. The fact that it’s losing money due to half-hearted management does not mean the business isn’t viable. Quite the contrary.

Anyone buying Nook buys an on-going digital-vending base with infrastructure in place to sell globally, with established relations with content-suppliers, and with a substantial core customer base to build on.

Two key contenders from our perspective are Alibaba and Wal-Mart. Both have a clear interest in digital content, both see Amazon as their biggest rival, and both could buy Nook out of loose change and throw at it whatever money is needed to get it back to health.

Nook is unlikely to ever regain its former position in the US, and in the UK and the Kindle countries in Europe it may struggle – too little too late – but even with the MS shackles Nook has shown it has a broader international vision. Something Jack Ma will be looking closely at.

The global ebook markets may still be nascent right now, but Jack Ma makes clear he is looking twenty years ahead, not just one or two.

Alibaba buying Nook would give Ma a foothold in digital supply across thirty-plus western countries at a stroke, and give him the supply chain to extend that back to Asia where the nascent markets are most promising right now. Not least at home in China.

As we reported just this past week, British indies hit number one on Kindle China with a British-based crime thriller, showing clearly China’s taste for western culture. Ma understands this and is already busy getting a foothold in Hollywood, while investing heavily in digital content and supply.

Buying Nook – and maybe Britain’s Blinkbox, also due to come up for grabs in 2015 – would seem a logical next step for Alibaba.

That presupposes that there is an amount of money that could be spent to bring the Nook business back to health. I have serious doubts that there is any way to come out ahead with the Nook business as it is currently structured. If your alternative is building a business from scratch based on your existing infrastructure (which is true for both Ali baba and Wal-Mart), it makes no sense to buy into the baggage that comes with the Nook.

If the price is low enough you could ditch the brand, ditch the adobe DRM, sell of the college business to Pearson, and keep the ebook contracts and infrastructure and, most importantly, the indie book business. That might be worth $300-400.

They could name the new business Nahnook. 😉

Losing money is not issue, rapidly shrinking your slice in a growing pie is.

Nor can I can I make much sense of the reasons offered as to why Jack Ma would be interested. China is where he is concentrating for now and Nook brings nothing to the table there. Nor is he worried by Amazon in China, in his sandbox they have a 1.3% market share – and falling – and that not going to keep him up at night.

Walmart might make more sense, and could take a bite if the price is right. A combination of pride, greed, and a wholly understandable wish to recoup some of that vast investment made suggests to me that B&N will price Nook way too high.

Why buy now when desperation finally forces them to sell what remains of it for a song?

And I finally figured out how this news affects that report that the Nook app would come bundled with Windows 8:
https://the-digital-reader.com/2014/11/13/nook-app-come-pre-installed-windows-8-next-year/

I think that effort was based in the knowledge that B&N would be splitting up with MS. Since the Nook app wasn’t going to be replaced by an MS app, it made sense to negotiate a bundling deal.

The Nooks were good hardware. The Nook Simple Touch is my main e-reader, and will remain so until it wears out. I decided it was superior to the Kindle equivalent. For example, the Nook can read most PDFs in different fonts.

B&N messed up on using the Nook as a vehicle to purchase digital books by having such a haphazard website. The Amazon website is very user friendly; the B&N website much less so. B&N should have devoted much more effort to web design.