Target isn’t the only retailer to remove old Nook hardware from its shelves. Store-level sources inside B&N have told me, and a reader has confirmed,  that B&N has had store personnel box up their remaining stock of the older Nook hardware and ship it back to B&N’s distribution centers.

This includes a store’s remaining stock of Nook HD, Nook HD+, Nook Glow, plus any older Nook Tablet or Nook Colors which may have been forgotten in the back of a supply closet, or were leftover display units. B&N is collecting both the remaining new and the refurbished units in central locations where they will be reserved for tech support, warranty replacement, etc.

And since B&N has long since removed the Nook HD, Nook HD+, and older Nook devices from its website, this more or less means that the hardware has been discontinued by B&N. But that doesn’t mean it’s completely gone (even though some stores have also taken down the Samsung Nook displays), just that replacement requests will now have to be handled via the B&N website and not the stores.

Just about the only think a B&N store can offer now in terms of replacement requests is to help the customer upgrade their Nook HD or Nook HD+ after it dies.

B&N has been making a lot of changes in anticipation of the spin-off of Nook Media later this year, and that includes radical changes like removing all Nook hardware from at least one store.

A couple weeks ago Matthew Diener tweeted a photo which showed the Nook dept in his local B&N. While it still had the same familiar tables, the hardware had been replaced by paper books: 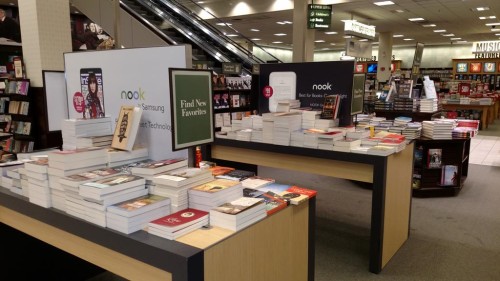 So far as I know, that has not occurred in any other B&N stores (certainly not in my local B&N store), so it is impossible to predict whether this is a precursor or simply an isolated incident.

But even if it just the one store this is still unsettling.

Does your local Barnes & Noble still carry Nook hardware? Is it even open?

The B&N store I go to still has an extensive section dedicated for the Nook, including working models on display and a kids' section.

My B&N store also still has a Nook section, although it’s not very impressive.

I asked my local Target about the Nook’s going on clearance and they said it was only the HD’s/HD+’s that are, but the Nook Glowlight is still being displayed at 119.99.

Curiously, my local Target got rid of all Nook hardware.

My Target ditched Nooks ages ago…like, a year or two ago.

I think it was more unsettling to go into these stores and see decrepit models still on display and hundreds of unsold HD/HD+ covers. It’s a shame they haven’t refreshed the Glowlight. That combined with the Samsung tablets could be an adequate product line if given a more conservative display space.

I don’t know why B&N and Kobo don’t work out a deal of some kind. Surely together they could be a decent Amazon/Kindle alternative.

Frowny-face. I liked the convenience of being able to pick up a replacement NC charger in-store from a web order.