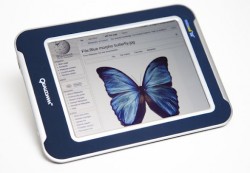 Amazon has several E-ink ereaders and they have the Kindle Fire on the market, but according to some gossip-mongers that just isn’t enough for the retailer. According to the latest rumor they’re planning to release a color Kindle.

Naturally, I think this rumor is a load of hooey.

Digitimes is reporting this morning that Amazon’s next ereader will have a color screen.It’s due out in the latter half of this year, and according to their usual unnamed sources it won’t be using the Neonode IR touchscreen found on so many ereaders now; instead it will be using a multi-touch capacitive touch panel.

According to the rumor, Amazon’s manufacturing partner is supposed to start getting parts this month, including the Triton color E-ink screen that I dislike to much. This rumor doesn’t mention the partner, though.

Sorry, but I just don’t believe it. The part about the color E-ink screen is the hardest to swallow. You might recall the last time that Digitimes dug up this rumor, when my source at E-ink said that they didn’t have a 6″ color E-ink screen in production. And it seems incredibly unlikely that Amazon might use the 9.7″ screen; I doubt they’d sell enough for it to be economical. It’s also ugly, but then again Amazon might be using an improved version of the screen.

But if you ignore the details about the color E-ink screen then the rest of the rumor is slightly more plausible. Amazon could well be working on a color Kindle using some other screen tech (LCD, Mirasol, Liquavista).

But I don’t see any of those as being a real possibility. Amazon already has an LCD based Kindle; it’s the Kindle Fire. A second smaller device would likely run Android and be more of tablet than an ereader.

And as for the other 2 screen techs, one is still extremely expensive and the other isn’t even in production yet. And while there are other screen techs that Amazon might use, I’m not sure that any of them are economical enough that they could be used in a consumer product.

Still, I’m hoping this rumor comes true. It would be interesting to see what Amazon pulls off.

Actually, if you look at Amazon’s product line there is room for a barebones LCD-based reader in the $99 range if they are serious about keeping FIRE at $199. Especially for the international markets where FIRE might not fly for lack of media content.

But wouldn’t that effectively be a smaller Kindle Fire, even if it doesn’t run Android?

I didn’t say smaller; just cheaper.
They might even be able to go to 8-9 in.
Or keep the nominal size and go to 4×3 for the screen to emphasize that it’s a reader, not a tablet.
Might be a good counter to the hypothetical iPad mini, too. At least for ebooks, mags, and comics.

Hey,
if this true it’d be fantastic and not a second too soon, reading books and looking at pictures and graphics in b/w plain sucks, this is 2012 not 1960,

imagine the market if they made a big one (9.7″ ) that was capable of displaying newspaper layout pages in pdf format, away with the printed morning paper, and away with the microscopic size fonts,

for me that the colors are a bit faded don’t matter, e-ink has so many other advantages,

now just get it out there already

>>>imagine the market if they made a big one (9.7? ) that was capable of displaying newspaper layout pages in pdf format

I hope that the rumor is more than a bunch of hooey, but we’ve all been waiting for color to happen by the "end of this year" for the past couple of years now.

I guess we’ll wait to see what happens during Display Week in June.