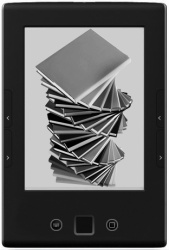 Not all the interesting gadget news this week has to do with CES; the Chinese web retailer DangDang has a new ebook reader in the works.

A few weeks back I reported on DangDang’s plans for a new ebookstore. They’ve since launched the store, and currently stock around 50 thousand titles. One detail I’d left out of the story was their ereader plans; they weren’t ready to discuss it.

They’re still not ready to talk about their new device, but yesterday someone posted an image and a few details. It’s nit completely clear, but it looks like this is an official release. the new device is due out in April, and the retail is around 499 yuan. Unfortunately, that’s all I know; the specs weren’t mentioned.

I don’t recognize the design. It’s not that I expected to have already seen it, but I can’t even identify the designer.  My best guess is that it might be from Netronix; it bears a vague resemblance to the PocketBook 302, which I reviewed last year. That piece of hardware was originally designed by Netronix, which was Pocketbook’s hardware partner at the time.

In any case, I’m not sure that anyone is going to use the related ebookstore. DangDang boasted at launch that they have 50 thousand titles, including bestsellers, but what they left out was that they have hardly any of this year’s bestsellers. They have already been criticized for the poor selection.

DangDang’s facing an uphill battle in the Chinese ebook market. Amazon’s not there yet, but the market is already dominated by Hanvon and Shanda. These 2 heavyweights have around 80% of the the local ebook reader market, and they both have much better bookstores.

Archos Arnova 8 is just one of the crowd

Nook Glowlight 3 Available as a Refurb for $89