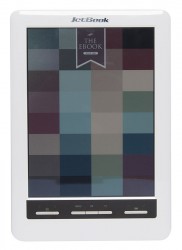 When Amazon killed off the Kindle DX earlier this year I took it as a sign that large screen ereaders were on the way out. I didn’t think they were worth the expense when compared to Android tablets or the iPad.

It seems that Ectaco never got that memo. They’ve just unveiled the Jetbook 2 ereader in Russia, and they plan to have it on the market by March 2013 (I don’t have news yet on plans for other markets).

The one major change with this new model is reportedly the Triton 2 screen. I’m still waiting to hear back from E-ink for more technical details on the screen, but according to the Russian language ebook blog who scooped me on the story this screen has better contrast and is noticeably less gray than the screen on the current Jetbook model. 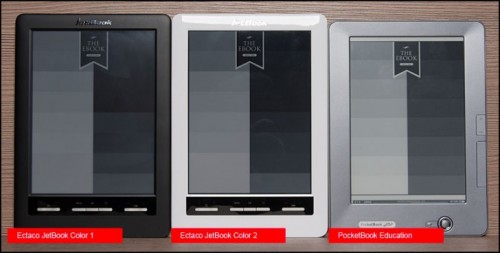 You’re supposed to be able to see the differences in this photo, but I’m not sure whether the bezel might be influencing our perceptions. 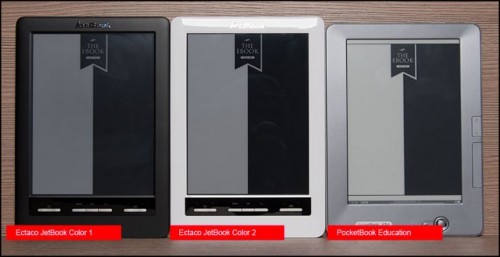 The new screen is still 9.7″ in size, and the resolution remains unchanged, but just making the screen less gray is a great improvement. My Jetbook Color had a screen so gray in color that it was darker than any of my other ereaders, including the original Kindle. It was so gray, in fact, that I took to calling it Dorian (it didn’t have 50 shades so I could not call it Christian). 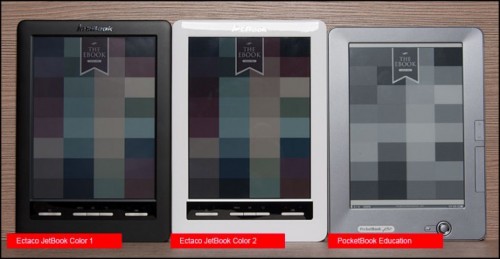 With luck this new ereader will be on display at CES 2013 next month. And with even more luck (bad, this time) some unfortunate students will be stuck with using it in the classroom instead of some more capable device like the iPad, laptops, or Android tablets.

Geez, you’re lazy. Cut out the screen pattern from the two bezels and put them side by side. I did. There really isn’t that much of a difference in color with most of the rectangles.

I think the point I made about the bezel was more important.

There is no substitute for Science.

Yes there is: just make shit up and hope no one notices.

real go0d point.
the matter is if they made it pure b&w but at least 12″ diagonal (and letter-sized) even with the same 1600×1200 resolution, I would buy one immediately.
I’m sick of glowing TFT (not really readable in broad sunlight) and I want long battery life.
But the most of all I want to get rid of scaling of PDFs I need to read.

I think that the camera flash is affecting the top of the black-bezel reader’s screen too much to really compare it to the white-bezel’s screen — if you look at it, you’ll see the same effect as the flash has at the top of the OLPC in the previous post. (I have no idea why the white reader doesn’t have the same problem.)

The white bezel was already a glossy white.

I do wish more large-screen e-readers were out there, color or not. I’d like to have a large e-ink display for technical books.