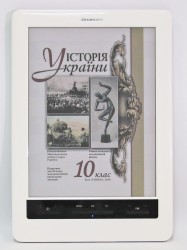 My Jetbook Color arrived just over 2 weeks ago, and I was hoping to have the review of the my new favorite toy posted by now. Unfortunately, it is missing so many features that I don’t think I can review it fairly.

The Jetbook Color got a lot of attention at CES a few weeks ago, and well it should. This is the first ereader to hit the market (in Russia) that is using the 9.7″ Triton E-ink screen. I’ve been lusting after it ever since I saw it for the first time at CES, where Hanvon (they originally developed the hardware) had it on display.

The idea of having  color E-ink screen has tempted me, but the unit sitting on my desk just doesn’t live up to my expectations. 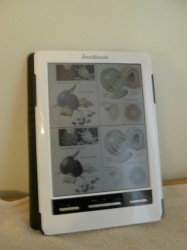 proof that I have it

First and foremost, this is not a review. I do not plan to post a review until there is actually something positive to say about it. This post is intended to give teachers and schools a better idea of the JBC’s current state.

The JBC is missing so many of the features promised on the product pages that you would be better to define it by what it can do. It can display EPub. The touchscreen works. And a lot of the educational add-ons are present (calculators, translation, reference guides, and  lot more).

But as an ereader, it is woefully incomplete. The Wifi and browser are coming in the second update, along with USB host. Handwriting recognition and annotations will be coming in both the first and second updates. TTS is also due to show up in the first update.

It’s missing so many features that at this point you would be clearly better off with the iPad. Even if you had to shell out for educational add-ons it would still be a better buy.

But I will note that the JBC has weeks and weeks of battery life. I know this because there is no sleep mode. I’ve had to leave it running for all this time (unless I want to turn it off).  This being 2012, can you believe that someone shipped an ereader without the ability to put it to sleep?

But that’s just the software. Guess what I think of the hardware?

First, the screen is gray. It’s so gray that I plan to call this ereader Dorian.

Next, the screen refresh rate is slow. It’s not just slower than any of my 6″ ereaders; it’s also slower than my Kindle DX (the 2010 model). The KDX can refresh the screen at nearly twice the speed of the Jetbook Color. I have no word on when this will improve, but I hope it will be addressed in an update.

Finally, yes, the JBC does have a color E-ink screen. Unfortunately, the dominant color is gray. No other color is nearly as strong.

Given its incomplete state, if you need a textbook platform right now (February 2012) I think you should get an iPad instead. Of course, that might change in the next few months,  but today the iPad is the better deal. (Android is also good, but at this point you can get more work done with the iPad.)

Highlights from The Petting Zoo

The only device which could be named properly "textbook platform" ever existed is/was the entourage edge, but the USA company ran out of business. It’s been relieved by russians abd it is currently being used in some schools. For working on texts is still unmatched.

FFS, man, get a picture without blur!

What about PDF handling? Bueller? Bueller? Give it a heart attack. Put those two torture PDFs on it.

Are you saying that the JetBook color runs Android? I was under the impression that it was WinCE (windows Compact edition).

I didn’t say that it runs Android. What I meant to say was that an Android tablet was also a better choice than the JBC (along with the iPad).

BTW, if it did run Android then I woulnd’t have complained nearly so much. I’d be installing apps.

Thanks I misunderstood. Android would have made it more appealing.

Its a pity that no one can get a good color e-ink reader out there.
Amazon should be doing it to protect their market share of e-books.
Apple and its iPad will be coming after Amazon now.
I can’t wait for the iPad3 and its expected retina screen.

I’m waiting for mine. I ordered one, despite this awful report 😉

As it is Windows CE based, I’m assuming one can install one of the many apps developed for that platform. It is a pretty mature OS. Granted, there is the problem of binary compatibility with the jetbook’s CPU. I’ll investigate this once I have my unit.

I intend to use this eReader to read outside PDF research papers (see e.g.
More than color, the 1600 x 1200 screen resolution is the big plus for this kind of use.

USB transfer is not essential inasmuch you can load your files on a micro SD card.

The WinCE OS is not accessible. I cannot install anything. I wish I could; I still have a folder of apps that I could use.

"It’s not the pale gray that you might see on the Nook, Kindle, or other ereader. No, the JC screen is so gray that I think it is darker than the screen on the original Kindle."

Unfortunately, it IS darker than the screen of my i-Rex iLiad (bought on april, 2007).

JBC, as any other e-reader based on e-ink technology, has not backlight. Since its screen has a gray color so dark, white backgrounds are also shown as dark grays. In my opinion, JBC doesn’t have the proper contrast for reading e-books. The severe lack of contrast causes eyestrain after one hour or two — ironically, people buy e-readers instead of LCD tablets to avoid eyestrain!

But maybe it’s just me.

Too many wrong information on this post. too many indeed. First of all JBC actually has a sleep mode. When the blue led is off is always sleeps. You can open a book a leave it on the same page without touching not a key and the battery can live for a month.
Another thing: comparing a little more seriosly eink first version (I user iRex iLiad 2nd version), pearl and Triton (JBC’s display) I found 2 things:
1) the "gray" of background depends a lot from the light. eink B/W, for example, has the same background in all light condition. Triton filter can reflects more if light is more strong.
2) the contrast is the difference from Background and Foreground. So with B/W document if you compare with pearl there is no story: pearl has more contrast. But I’m not so sure if you compare a no-pearl eink and Triton because the black of Triton are far more strong than, for example, iLiad’s black

Lastly in my experience I can see the screen is very eyes friendly (if you use it with a proper illumination) and I enjoy use it with technical PDF, comics and romance books for hours of reading sessions (I hate to watch TV, I prefer reading 🙂

P.s: I beg your pardon for my english and I hope I explain my thought well enough.

If the buttons are still active then it isn’t in sleep mode.

[…] partner is supposed to start getting parts this month, including the Triton color E-ink screen that I dislike to much. This rumor doesn’t mention the partner, though.Sorry, but I just don’t believe it. The […]

[…] You can read the full review if you like but I’m not sure you need to; it basically says what I wrote 3 months ago and again last week.There is almost nothing to recommend about the $499 Ectaco JetBook Color. We […]

[…] in the summer of 2011 and launched in 2012, the Jetbook Color was the first ebook reader to feature a color E-ink screen. The device came with […]