Exclusive: New Samsung Galaxy Tab 4 Nook to be in Stores Wednesday, Will Cost $179

Barnes & Noble will be unveiling their new Nook hardware on Wednesday morning in NYC, but I won’t be there. Instead, I plan to be out in front of my local B&N store at 9am tomorrow, waiting for it to open.

My inside sources at B&N have told me that the new stock has already been delivered to stores. The in-store demos are going to be reset Tuesday night and Wednesday morning, in time for the new hardware to be sold when the stores open.

Update: The product page for the new tablet is up, ad I am now back home with the one I bought.

And while I don’t have full details on the special offers that will launch tomorrow, I can tell you the price. According to one source, the Galaxy Tab 4 Nook will cost $179. That is the full retail price of the Samsung Galaxy Tab 4.

So how does that compare to the rest of  the market?

Here’s a quick rundown of the leading competition. I’ll let you make up your own mind.

Kindle Fire HD (2013) – The Tab 4 Nook will likely have better performance than Amazon’s budget tablet. The Tab 4 Nook has a faster CPU, cameras, and thanks to the microSD card slot more storage options, but the Tab 4 Nook loses in the screen dept and on price. The $139 Kindle Fire HD has the same screen resolution but a higher quality display.

Nexus 7 (2013) – This tablet is the closest competitor to the Galaxy Tab 4 Nook.  It has a better and higher resolution screen, better cameras, hugely better CPU, and will almost certainly have better performance. And since you can find it as a refurb for $129, it also offers a better price. Update: But, as one reader reminded me, the Nexus 7 does not have a card slot. Thanks, Lynne!

Kindle Fire HDX (2013) – With a retail of $229, the Fire HDX is a media tablet that is not a direct competitor to a general purpose tablet like the Galaxy Tab 4 Nook. And while it does have a better CPU, better screen, more storage, and more RAM, it also lacks the 3MP rear camera on the new Nook.

B&N is committed to buying a million tablets from Samsung over the next 12 months. According to the contract details filed with the SEC, B&N will also release a 10″ model based on the Galaxy Tab 4 10.1. The larger tablet is set to launch about two months from tomorrow. 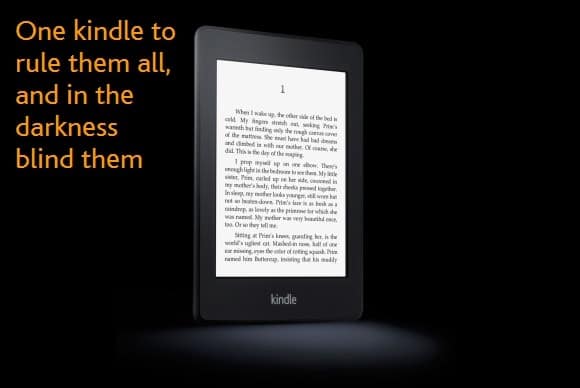 I was hoping for 16GB of storage on board because Samsung takes so much with the OS, etc.

The Nexus 7 is it for me. I have the 2013 version, my daughter has the 2012 version and we are never without them. I do everything on it that I’d do on my phone except actually make phone calls (I can tether it to my phone for the wifi). My only wish is for better quality cameras, and an SD card slot. But that wouldn’t stop me from buying one.

Oops. I forgot the card slot. Thanks for pointing that out.

The refurbished Nexus 7 would be my first choice if I were in the market for a new tablet. It’s a great value.

Under $100 for a Nook HD refurb is attractive but I think that model has a particularly terrible fit & finish and feels cheaply made. I was surprised by that when it launched because the HD+ feels much better and even the original Nook Color and Nook Tablet felt sturdy and well-made.

Interesting. One of the things I really like about my Nook HD is the fit and finish. It feels better in my hand than my old Nexus 7 (2012), which is why I sold the Nexus.

I can’t believe that price for those specs. I can’t imagine they will sell as many of these as they are hoping. Guess I’ll have to find the time to run by my local B&N tomorrow. Too bad we live far enough apart, Nate, that it doesn’t make sense for us to visit together.

It would have been nice to see it together, yes.

I would have to agree with the previous comment regarding the Nook being the better of the two tablets when it comes to fit and finish. I own a Nexus 7 and a Nook HD. While the resolution is better on the Nexus I prefer reading with the Nook. The thin side bezels on the Nexus make it uncomfortable to hold and I find often when I change my hand position I get multiple page turns as my fingers come into contact with the edge of the screen, which never happens with the Nook. Both good tablets but I prefer the egornomics of the Nook. Also, since Nook added Goggle play, I think it has become the best overall value of any tablet in the market today. I’m almost tempted to buy a spare.

I’ve got all I need right now from phone to tablets, but look fwd to reading your in-my-hands review.

Also, been commenting with some folk in Goodreads about the need for an e-ink reader that would accept apps from places like Scribd and Oyster. Do ya’ll think a new Nook could make that happen? Is it a technical thing Barnes & Noble and Amazon could make happen but haven’t to this point? Thanks!

I have a Samsung Galaxy Tab Pro 10.1 right now, with 16 GB worth of internal memory. Despite the really fast 64 GB memory card sitting in it’s microSD slot, I’m completely out of internal memory, because, even when you move apps to the SD card, they still take up space on the device.

Samsung is notorious for having a HUGE amount of bloat added to the OS. It’s not all useless stuff by any means, but it DOES take up massive amounts of memory. I’m going to root my tablet this weekend just so I can remove the rather large Samsung apps that I don’t use because I can no longer install anything from the app store.

No, I don’t have an excessive number of apps on my tablet–I have more on my phone, actually, which also sports 16 GB of internal memory, but it’s a Nexus 5 without all the added bloat to the OS, so I haven’t run out of app space yet.

It does have one advantage over the HD. A standard micro-USB slot.

Oh, and Hannibal Season 1… Oops. Never mind. I get that on Amazon Prime. It’s just the micro-USB slot.

That is definitely an advantage, yes.

[…] specs have been endlessly discussed on this blog and can be found listed elsewhere online, so I won’t relist them all here, but I do want to […]