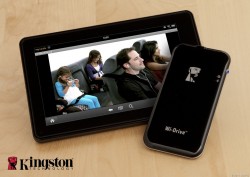 One common complaint about the Kindle is that the 8GB of storage simply isn’t enough, and since it doesn’t have a card slot or USB Host there is no way to add more.

Kingston found a way around this shortcoming. Yesterday they announced that they’d released an app for the Kindle Fire which adds support for the Kingston Wi-Drive.

The Wi-Drive is one of the many Flash storage solutions offered by Kingston.As you can probably guess from the name, it has both USB and Wifi, and that means that you can access one by being on the same Wifi network. It comes in 32GB and 16GB flavors, and you can find them on Amazon and other websites.

Besides the KF app, there’s also an app in iTunes and the Android Market.

This is a neat idea, but it’s not your only option. I don’t have a Kindle Fire, but I have looked at storage options before. First, Amazon already gave you 5GB of Cloud storage just because you are a US customer, and if you buy an mp3 album you can get another 15GB cheap (under a buck).

Wifi equipped drives are nothing new, so you could also look at Kingston’s competitors and see what they offer. In fact, this tech is so well established that there are any number of generic external hard drive cases that also have Wifi and network support. You would have to access the files via a browser, not an app, but that might work better (fewer restrictions).

And then there are the various online storage sites like Dropbox, Box.com, ADrive, and others. Most offer a limited amount of free storage as a teaser in the hopes that you upgrade to a paid service. Some even have iOS and Android apps (Dropbox, for example).

And let me throw in one outside the box idea: calibre. One of its lesser known features is the ability to run on your PC and act as a content server over Wifi or other networks. It provides its own browser based interface, and you can use it to share your entire calibre collection. I’ve sometimes thought about using it to share files at a conference, but that’s not possible these days (too much signal congestion), I also know of a number of people who use calibre on their home media servers as a central ebook library. It works well.

An iPad stylus for lovers of fat markers (video)

I use Pogo Plug you can add external hard drives to it and access the data anywhere. It is you’re own personal cloud.

How quickly can I find it and where can I purchase it? I’m in desperate need of more storage and have purchased the wrong external storage once already, just need a little help so if you could point me in the right direction I would be eternally grateful, I have a kindle fire. Thank you out of storage in Phoenix

Would my own personal cloud storage work or Kingston Wi-Drive 32GBP USB 2.0 pocket size Portable Storage WID/32GBZ ? You can tell I’m fairly new to this, so any advice would be greatly appreciated.

I went to a conference which was recorded on a Kingston flash stick. Any idea if I can access content on a kindle fire or iPad Pro? What would you recommend as it’s also a video. Thank you !

Sure. You could access it directly from your Fire tablet, but you will need a USB converter plug.

Really, the easiest way to access it is to first load the content onto your computer, and then transfer it to your tablet.

Where can u get a converter plug?

I used to send people to RadioShack, but now I think your only option is a local computer store or Best Buy.