Amazon released its monthly KDP Select report yesterday, and the news was unsurprising.

The report revealed that last month Amazon was paying indie publishers and authors  an average of $1.41 each time an ebook was loaned from Kindle Unlimited and the Kindle Owner’s Lending Library. The loans were funded out of a pool of some $8 million, and with a little math and the back of an envelope we reach an estimated 5.67 million loans for February. 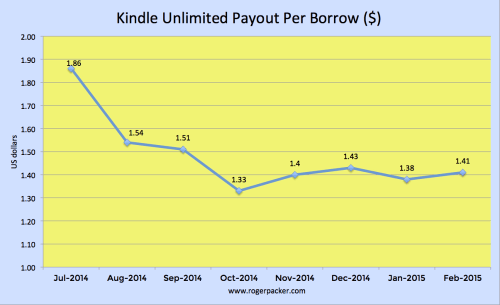 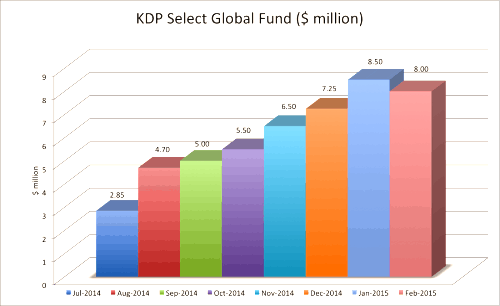 Update: Sometimes I miss the obvious. February has 10 % fewer days than January, so the fact that loans dropped by less than 10% is not remarkable. (Thanks, Fbone, Daniel!)

Given that Kindle Unlimited has yet to reach its first anniversary, we don’t have enough data to do a year over year comparison. But I do find it interesting that I can see a clear connection between the expansion of KU into Germany (October), Spain and Italy (November), France and Brazil (December), Mexico and Canada (February).

Kindle Unlimited was the subject of controversy late last year as a number of indie authors claimed that readers had stopped buying ebooks as they switched to KU (I had an alternate theory). In retrospect, that seems more than a little implausible, given that the US ebook market alone was worth a couple billion dollars last year, and Kindle Unlimited funding worth only millions of dollars a month.

Gee whiz. February down on borrows 8 percent. But February had 10 percent less days than January. So February is actually up over January. No?

Sometimes I miss the obvious.

Nate you continue to insist that KU hasn’t affected sales. Dude, please. I sell books. I publish books. It’s made a huge difference. Where do you get your fantasy from? Maybe you’re not looking at market segments? In the pop genres like romance, it’s been a killer.

It would be interesting to know how different categories have been affected.

And as I asked you last time, where’s your evidence that sales are being affected only in the markets where KU is available?

So far, no one has shown any proof to back up the claim..

The waters are also muddied by Scribd and Oyster’s subscription services, increased use of public library lends, increased backlist releases by author estates, and probably most significant of all: indie authors developing large enough followings to eat into tradpub sales.

Most of the "evidence" of declining sales is simply reporting declining tradpub sales. As the saying goes: "the plural of anecdote is not data".

Actually, the AAP reported ebook sales up. That too muddies the water.

Quote: "Kindle Unlimited was the subject of controversy late last year as a number of indie authors claimed that readers had stopped buying ebooks as they switched to KU (I had an alternate theory). In retrospect, that seems more than a little implausible, given that the US ebook market alone was worth a couple billion dollars last year, and Kindle Unlimited funding worth only millions of dollars a month."

The entire ebook market is is large and Kindle Unlimited only pays out a few million a month, therefore KU doesn’t hurt an author’s sales? Sorry, but I fail to see any logic in your argument.

The large size of the entire ebook market and the small amount of payments Amazon is making is irrelevant to what happens when a particular author places a particular book in Kindle Unlimited and gets paid for rentals instead of purchases.

At most, the huge size of the ebook market simply means that KU’s relatively small size (actually the reference is to small payments) means it may be hurting only a limited number of sales. That says nothing about what a much larger KU market would do to sales.

My hunch is that a small and not that convenient rental market won’t hurt authors. It’ll only attract those who refuse to buy. But a far larger market, particularly one where Amazon twists ebook visibility to favor (more lucrative for it) rentals, would be a different matter. It would convert buyers into renters.

And the resulting reduced income for authors would force them to raise their retail sale price still higher to make a living, driving still more readers into renters in a terrible Catch-22.

Finally, remember that with sales, the author determines the price and hence the income from a sale. In contrast, with rentals, authors are dependent on what Amazon chooses to pay them. The larger that rental market grows, the less Amazon has to pay. Authors become captive to Amazon’s dictates.

That loss of control over income is the key reason why rentals are likely to be bad for authors.

Kindle Unlimited simply makes no economic sense for authors who’s books sell above the price where the rental payout is less than the payout from a sale.

For those books who’s price is at or below that, Kindle unlimited makes sense.

What this means is that Kindle Unlimited will only effect the lower price sensitive portion of the market.

Some segments, particularly fiction such as romances, may be effected more since many readers want to chew through a large number of books and Kindle Unlimited offers an advantage for them.

Kindle unlimited won’t kill publishing or even indie publishing, but it will force changes. Wether they will be good or bad depends on where you are in the ecosystem.

I carry multiple dozens of ebooks on my phone – an LG3 with a swappable 128 GB card in addition to 32GB on board. They’re also on my Kindle, on a tablet (mostly cookbooks on the tablet), and often as I read the tablet for recipes as I am cooking, I also listen to Dallas maintain law and order in a future version of New York City. The stream from KCSM in San Mateo is also running if it’s a Monday or Wednesday evening, because that’s when the rest of my network welcomes the gentlest and skillful force of nature in this country’s media – Jayne Sanchez.

It’s not all about books anymore.

ebooks – and the explosion of new authors awakening to a model mostly publisher-free – have arrived. The 6 inch screen – my LG3, the Samsung’s, Apple’s catch-up 6 Plus – and what they can do if the background tasks really can be handled on the wrist – is also going to change the "book" business.

Were I a writer – I say without trying to be smug – I’d write more content and fewer protest letters. Your case may be impeccable and your reasoning flawless, but rental and multiple other distribution methods are heading our way. The greater threat to the writer isn’t other writers so much as the hundreds of other things people might choose to do with their time instead of reading.

[…] is a new record for KDP Select, and compared to January 2015 it represents an increase of about a million additional ebooks being […]

Kindle Unlimited is the realm of short fiction, novellas and serial installment fiction.

If you attempt to shove full-length fiction into KU, you are losing money.

The authors who get the most out of it are writing steamy fiction, releasing short snippets, and catering to the KU craze that is a powerful tool for exposure and income.

Stop complaining about it, and start figuring out how to use it.

Serious authors who see the trends are slamming short fiction and serial installments into KU and making it work for them, while the rest of authordom sits around whining.

Yes it sucks for the Indie market.

Yes its stealing sales from all my full length novels.

But now I am making more money off of short fiction than I was my full-length books. LOL.

See which one gets you paid.

My thoughts exactly. I’ve already mentally adjusted my writing sails for this. I once upon a time wrote series in 30k book chunks and sold each at $2.99. Then I thought, let me write novels and charge 3.99.

Not sure what I was thinking at the time, but the new KENP they’re implementing in July changed my view on that. It was foolish for me to change my original strategy, basically I decided to write more for less money.

Some say the new KENP will help authors who have more pages in their books but I can’t really see that is the case since we’re getting paid "by the page". If I’m understanding it right, that doesn’t guarantee longer books will get read, if anything that will guarantee that more shorter books will get read and it will take them longer to read your book!

So, needless to say, I’m going back to shorter books, lol. I can put two out per month and make a nice killing with it since I control the content and quality of my books and know that my readers will read them quickly and without stop.

So, to me, this really allows readers to help Amazon do what they can’t or won’t do– censor the "quality" of work. If you’re good, you’re likely to get read quickly and without stop. If you’re not, you lose. And those who know what they’re doing in the craft, win as a general rule. Which is as it should be.

So, all in all, if I’m understanding the new KENP policy in place, the good writers will benefit from this the most if they adjust their sails for these new waters.