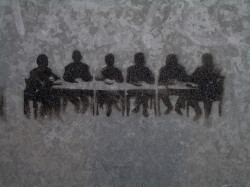 Amazon fired their latest salvo in the pr battle with Hachette this morning, and for once I wonder if they made a mistake.

The retailer sent out an email to all authors and publishers currently signed up with KDP, asking them to take a side in the ongoing contract dispute with Hachette. The letter can be read at readersunited.com, so I won’t quote it here, but I do wish to comment on it.

The letter expands upon the arguments presented in Amazon’s last statement, which was posted on one of Amazon’s forums, and it frames the ongoing contract dispute with Hachette as primarily having to do with ebook prices (why KDP authors should care about Hachette’s rbook prices being too high, I do not know).

The letter opens with a brief history lesson on the rise of paperback books, including a misquotation of George Orwell (which is a shame, because the full quote is an apt fit for recent history). The letter goes on to remind us of that recent history, including Hachette’s role in the collusion to raise ebook prices, and then it reiterates the economics argument Amazon made in their statement last week (which does have some market research to back it up).

The letter concludes with a plea for KDP authors and publishers (as well as anyone who finds the website, which has the salutation Dear Readers) to directly email Michael Pietsch, the CEO of Hachette Book Group, and express their displeasure.

This is not a good sign. While I don’t want to single out Amazon for engaging in a pr campaign (Hachette started one months and months ago), the fact that Amazon is now trying to fight this as a pr battle and not in the boardroom suggests to me that the negotiations are not going well.

If Amazon thought they were shortly going to get the deal they wanted, or even one they could live with, they would not have sicced KDP authors on Hachette. It would have been a wasted effort, and contrary to Amazon’s past behavior, to recruit allies to act on its behalf.

But now Amazon is actively building a base of support. I see that as a sign that Amazon expects the negotiations to drag on. Speaking as someone who would rather see authors, that sucks.

P.S. Does anyone else wonder whether Hachette is dragging things out so they can get another major trade publisher to help them tag team Amazon on Agency pricing? It would fit with Hachette Livre CEO’s statements that there was no hurry to resolve the dispute.

Kindle Store to Launch in the Netherlands in October?

That $4 Indian Smartphone Actually Costs Around $60

Of course the negotiations aren’t going well.
There are no negotiations and there haven’t been any at all.
It takes two to tango and you can’t dance with a stone wall.

Amazon ratcheting up the PR is the only step left before delisting Hachette.
Or submitting a brief to Judge Cote.

dlisting would be a mistake in my opinion. Lots of people would buy those big names on Barnes and Nobles or ibooks. Patterson fans are fierce. I once stood in line at one of his signings and lost track of how many hours it took to get up there. The same can be said for some of Hachettes other big names I’m sure. Also, the other big 5 members could ban together and pull their authors in a boycott. I mean they all have something to lose in this if Amazon wins. Could indie authors carry Amazon sales? I am an Indie, but I respectfully admit they could not. No Patterson, KIng, Evanavich, Roberts equals no customers.

I read that email at 3 am. It sounded like a half-drunk noir writer with a raging hateboner for Hachette wrote it. It took me a while to decide it wasn’t a hoax and it really was from Amazon. It was dismaying, not necessarily because they did it, but because it stinks of amateurism.

Perhaps Amazon is getting desperate. I mean isn’t it September that Hachette can go back to Agency? This seems to have been just a long, drawn out stalling on Hachette part. I hope the courts are paying attention and slap them again.

Amazon’s moves are ordinarily measured and intelligent. This one, not so much. This email does have a rather desperate feel to it and it’s out of character for Amazon. Once Hachette can go back to agency next month, they may delist their books at that time. Since Judge Cote has the colluders signing new contracts on a staggered 6 month timetable and Hachette’s expired in March, does that mean Simon & Schuster’s contract expires next month? If Amazon stood to lose two major pubs at once, they might get a bit white-knuckled at the prospect. I doubt Judge Cote would be very pleased. The DoJ is already scrutinizing Hachette, Simon & Schuster, and HarperCollins. There may be a good reason for that.

I think they are losing this. If you think about it, they won the right not to raise prices. This is the flip side of the same argument and you don’t get it both ways.

I wondered if someone had hacked into Amazon’s kdp database because that email made no sense. In general, indies are helped by high NY prices. I’m for all authors, but me responding to that email isn’t going to help anyone. Frankly I don’t think it would even help Amazon other than to perhaps flood a Hachette email box.

I don’t think the ad you mentioned in the previous email was a good idea either. Way to waste money. The average reader isn’t even aware of who publishes a given book and many of them don’t know there is a dispute. Even if they did, they are not likely to rally around a particular retailer.

Moriah, your characterization of it as a "half-drunk noir writer with a raging hateboner for Hachette" was funny and true.

First, I have not weighed in on this matter over the last few months. I will do so now: I simply don’t care.

I really want there to be lots of competition in the ebook distribution space, but this private negotiation doesn’t affect me at all as either an author, publisher or reader.

I have never and will never buy an ebook which costs more than 8 dollars (except in very rare cases). And yes, I do resent it when an ebook title costs $10 because I know I will never buy it. For the time being there are plenty of titles to feed my literary appetite and lots of second hand books to keep me happy, so I don’t worry about Amazon’s not carrying Hatchette’s books.

One of the underlying problems is that Hatchette et al have built their businesses on the assumption that they can make a certain amount of revenue per book, and so they have priced their books in a way that they think will help them achieve that revenue. I don’t begrudge them that goal, but instead of fulminating about Amazon’s pricing or demands, why don’t they just support a competitor? Really readers are not so dim-witted that they won’t be able to find an ebook not on Amazon.

What I do resent about Amazon is how their KDP agreements specify a price floor for 70% royalties and lets them price match ebooks sold by any competitor. But these points have nothing to do with the current Hatchette dispute.

[…] from the inundation of emails Amazon triggered with their plea to KDP authors and publishers early Saturday morning. In fact, they've already started responding to emails sent by Amazon supporters with a form letter […]