New Kobo Aura H2O eReader Clears the FCC, Has Wifi and a 6.8″ Screen

The drought of news about new US ebook readers ended today with the discovery that Kobo’s next ebook reader has made an appearance on the FCC website.

Kobo (or rather their hardware partner Netronix) has taken the sensible precaution of placing most of the useful info under an embargo, but there were a few nuggets of information scattered across the filings.

I can confidently report that the new Kobo device is described as having a 6.8″ screen, and that it was tested for Wifi. There is also a mention of a microSD card slot but no hint that the new device has audio support.

It looks like we might have a replacement for the Kobo Aura HD, the 6.8″ ereader which launched last spring. That device sported a 1GHz CPU and had an infrared touchscreen, a frontlight, and a 6.8″ Pearl HD E-ink screen with a screen resolution of 1440 x 1080.

All in all, there’s very little to say about the FCC filings other than that they happened, and given the rumor that popped up last month I find I have more questions than answers. 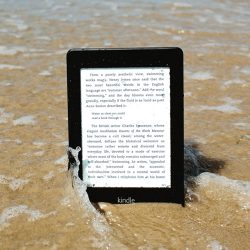 I claim this land in the name of Jeff Bezos, Amazon, and their stockholders

Last month the ever reliable @evleaks reported that Kobo was going to release a waterproof ereader called the Kobo H2O. As I reported at the time, even though there was no evidence to support the rumor I thought it had a good chance of coming true.

Making an ereader waterproof was a logical next step for a device that could be used in full sunlight, but just as importantly one of Kobo’s competitors already has a waterproof model on the market in Europe. The Pocketbook Aqua is an unimpressive budget device with a premium price tag, but it shows that at least one ereader maker is thinking in this direction.

Update: This device is named as the Kobo Aura H2O in the PDF for the FCC ID label. (There was a second page to that PDF which I missed when I first looked at the PDF.)

This new Kobo device could just as easily be based on the prototype ereader that Netronix showed off at a trade show a couple weeks ago.

Charbax caught up with Netronix at that show and showed us an ereader with a 6.8″ E-ink screen, Wacom touchscreen. It ran Android 4.1:

It is entirely possible that Kobo sent their version of the Netronix prototype through the FCC last week, and not the waterproof model. There’s also a chance that the prototype and the rumored waterproof model are one and the same.

There’s no way to tell at this point, so we will just have to wait and see. 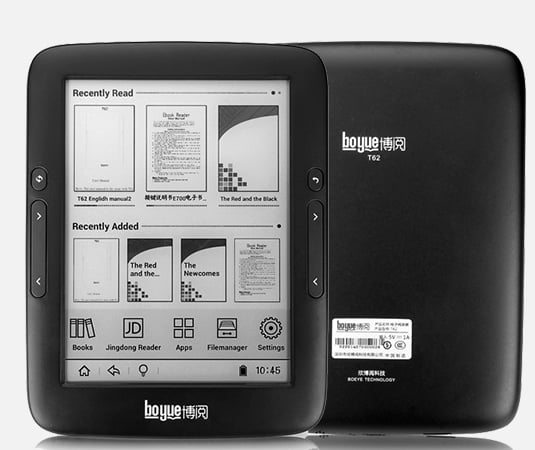 I fail to see the point of waterproofing. I’ve read on the beach, in the bath, with various devices, for more than ten years, and I’m without any doubt less dexterous and careful than most people , but I never had any accident. A nice option of course, but not a required one.

But if it’s an Android one, and can run the kindle application… I could be interested by the bigger size. .8″ is not much more, but it would help for technical books.

If you googling for "kobo n250" you can find some retailers with a AURA H2O SLEEP COVER CASE BLACK PU LEATHER in pre-order. I’ve found several of this in Italy. So i think H2O is close to launch.

I only found a single listing, and I also had to add the word cover to find that.

It is, yes. That screen is long enough that it can show a realistic lightsaber.

It seems that Amazon is leaving the non-6″ Vanilla e-reader market. No new model. Maybe they’ll release color next year and ignite the market. Not that I need color to read a book…

I don’t think we know what Amazon is doing with the Kindle.

The Kobo Aura HD was launched May 2013, not "last Spring". It was originally labelled a "limited edition" device and, so far, remains the only e-ink reader I am aware of with a 6.8″ display (6.0″ being almost universally adopted). For a time, it was the highest density dpi frontlit ereader from anyone. It’s still my favourite eink device — it sounds crazy but that extra screen real estate makes it feel like reading a trade paperback vs. a mass market one. It’s great to hear it may be updated as H20. But what’s new? Faster processor perhaps?

The month of May might count as winter up in Canada but here in Virginia it’s not unreasonable to call it spring. If June is the start of summer, then May is spring.

As for the 6.8″ screen, there’s also the Onyx Boox T68, of which there are several variants available in Europe and Russia.

I reviewed one, and I like it. The Lynx runs Android 4.0 on a 1GHz CPU and ships with Google Play. It’s great

I seriously doubt if the "extra screen real estate" of the Kobo Aura HD makes reading more confortable.
In theory, yes, a bigger screen should improve readability but the problem with all Kobo models is that they all have a very huge, non-adjustable header and footer on the page. This makes the "extra screen real estate" almost nonexistence when Kobo readers are compared one-in-one with ereader models of the competition (Sony T2/T3, Amazon Kindle PaperWhite models).
These models have also headers and footers but these are small. Not bigger than necessary and take approximately 75% less "screen real estate".
In other words: a non Kobo 6″ device can display as much text as a Kobo 6.8″ model does.

However, I do understand why you like your Aura HD over any other ereading device because it has a high resolution screen of 265 dpi compared to 212 dpi for most other models. This makes text look more clear, crisp, sharp etc. That is the only real benefit of the Aura HD.

This said, I’m sure this will be no different for the new Aura H2O, which hopefully contains a Carta screen and a higher resolution (265dpi or up).

I remember the Kobo HD being released spring 2013. Anyway, overall, Kobo produce the best e-readers, in terms of hardware and even device functionality; unfortunately, their pricing isn’t competitive. I would say Barnes & Noble Nook offer best value for money,
Amazon Kindle have the superior e-reader infrastructure and support and Kobo produce the best hardware and software functionality.

What the market really needs are 8″+ front lit readers. 6″ market is saturated and minor improvements won’t sell new products if people are happy with what they already have. Putting android on the readers is nothing but a gimmick since e-ink is not suitable to be a tablet replacement.

I agree using Android on these devices is less than ideal but I’ve never thought it was meant to be a gimmick. Rather, I’d wager it is simply cheaper and easier to slap it in than deal with other OS options.

Agree with Freda; the 6? marker is indeed saturated. My hunch is that one of the reasons companies keep produce these e-readers, while experimenting with tablet size (7, 8, 10 inch tablets), relates to the problem that e-ink readers don’t sell well enough to risk innovating. I think not only is the 6″ market saturated but is generally in a state of comatose and adding Android won’t change anything, as it is not suited to e-ink devices at all. I would rather have genuine innovation in both device hardware and functionality, with Kobo at least trying to push in that direction.

If memory serves, Kobo generally releases their devices in the pre-Christmas season, which September/October qualifies for.

The Aura HD was a special release, and was out of the normal release cycle. Also, if memory serves, that one came about due to the sudden availability of hundreds of thousands of screens and Kobo leapt at the opportunity to release a large screen device with less risk then if they had to pay full price for the screens.

Waterproofing is a good move. It costs little and can make a big difference, as anyone who has had an accident with a cell phone knows. I’d love to see smartphone and tablet makers take up the idea.
I’d also love to see someone come up with a sturdy and waterproof shirt/pant pocket sized epaper reader. That’d be one we could always have with us.

Too bad, I was expecting an HD 8″ Carta screen reader from Kobo, that would be the ultimate ereader.