Next XBox to Get Tablet-Like Controller

We all know that Microsoft announced their new Surface tablet last night, but that’s not all that happened. One unrelated story was lost among the froth of excited bloggery in the build up to the launch yesterday, and as I look over it this morning I realize it is nearly as important.

A spec sheet leaked a couple days ago which detailed the not yet released Xbox Surface. I saw it yesterday, and I initially held the post so I could use the info to support the big news announcement last night. I’m glad I held it because it turns out that the Xbox Surface probably has very little to do with the event last night.

The spec sheet indicates that the the Xbox Surface has a 7″ (1280×800) screen with card slots, Wifi, and Bluetooth, but what it doesn’t have is a CPU. That is in the "stationary computing device", which in fact has 2 multi-core CPUs as well as 5GB of RAM and an unspecified graphics chip.

Don’t get me wrong; I think the Xbox Surface is going to be great – assuming this spec sheet is for real. But the important thing to note here is that the Xbox Surface isn’t going to be competition for the Windows tablets announced last night – not in any form. Those are mobile devices while this one is fixed.  Microsoft is quite carefully not letting their 2 products get in each other’s way. 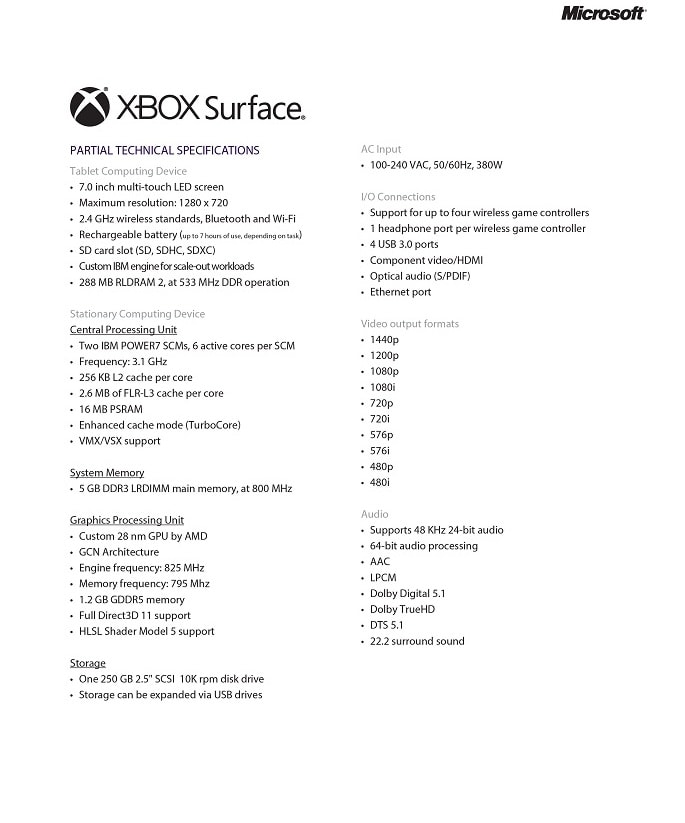 The Periodic Table of Typefaces (infographic)

At E3, Microsoft introduced their SMARTGLASS initiative to provide the existing XBOX with "second screen" and mobile access features. They only announced SMARTGLASS as a set of software apps for Smartphones and tablets but they made it clear there *would* be a hardware implementation for XBOX at some point.

That point is more likely to be next year, when the NextBox hits.
Especially with the WiiU smelling pretty lemony right now.

Interesting. It makes me wonder why so many blogs misread the spec sheet, given that the earlier announcement clearly hinted at it.

Me, i didn’t catch that news because it wasn’t ebook related.

They misread them because they had Tablet on the brain. 😉
They looked at the specsheet, read 7in screen and figured, "Ah! FIRE killer!" and skimmed over the rest.
For all we know, there *will* be a "FIRE-killer" XBOX Tablet coming… later. After the XTV internet TV service launches. Or after the iPad mini. 🙂
MS has a lot of irons in the fire at any one time, the same as their competitors.

There is a tendency to forget how big these tech companies (MS, Apple, Amazon, etc) are and how they can devote entire teams to different projects and keep them entirely separate.
For example, the Surface tablets have been in the works at MS for 3 years, during which time an entirely different group was cooking up the Courier (now we know why it got cancelled, no) and a third group has been working on SmartGlass and the XBOX second-screen hardware.
And there is doubtlessly another team working on whatever they’ll be doing *next* year in the Tablet space.
It’s a never-ending challenge…

I’m not sure it would matter to me. I’ve found the normal controllers to be incomprehensible. I just don’t play enough to have ever learned gotten past the steep learning curve.

[…] According to The Verge, a new 7″ Surface tablet has been confirmed as being in the works. It’s going to be called the Xbox Surface and if this rumor is true then it will likely have specs similar to the ones leaked back in June. […]

Microsoft Drops Hints About the Xbox and Their eReading Plans – The Digital Reader October 17, 2013 um 3:37 pm

[…] might have a 7″ tablet style controller similar to the one found on the WiiU, but aside from a leaked and possibly fake spec sheet all we have are rumors. That device was called the Xbox Surface in the rumors, which of course […]